Kumbh Mela, held every 12 years in the northern city of Allahabad (recently renamed Prayagraj) is set to begin on Tuesday, January 15, 2019, and expects a footfall of about 120 million Hindus between now and March. 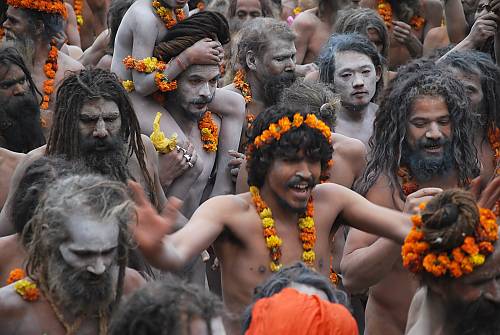 Kumbh Mela, held every 12 years in the northern city of Allahabad (recently renamed Prayagraj) is set to begin on Tuesday, January 15, 2019, and expects a footfall of about 120 million Hindus between now and March.

Billed as the largest religious gathering in the world, crores of devotees will undertake a pilgrimage over the next 50 days, to take a dip in the confluence (Sangam) of Ganga, Yamuna, and mythical river Saraswati. In Hinduism, this is believed to cleanse all sin and grant deliverance or moksha.

This year, have themed the event around Swachh Kumbh, Surakshit Kumbh (Clean Kumbh, Safe Kumbh), stepping up sustainable and security measures to remodel the event around the central government’s cleanliness campaign. Uttar Pradesh Chief Minister Yogi Adityanath has pulled all stops to ensure that the event, beginning on January 15 till March 4, is the cleanest Kumbh Mela in India’s modern history.

A 3,200-acre temporary city has been set up on the mudflats of the river banks, housing modern amenities for the Kumbh Mela including AI technology for better crowd management and a transgender akhara which led their first ever Devatva Yatra in Allahabad earlier this week.

Listed below are some of the measures adopted by the UP government this year.

However, despite such extensive arrangements, a fire broke out at a camp in Digambar Akhara at Prayagraj on Monday. Local reports suggest a cylinder blast caused it although it was brought under control quickly without resulting in any injuries or casualties. Around 10 ambulances and an air ambulance were immediately sent to the spot. Adityanath has ordered the fire department to inspect all the camps.

For beautification, the city of Prayagraj underwent a complete makeover in the weeks before the Mela. “Intersections, flyovers, buildings & walls of Prayagraj are being painted, under ‘Paint my city’ initiative of Kumbh Mela Authority to beautify the city ahead of #KumbhMela2019. More than 1000 artists, of 5 agencies by the Authority, are decorating the city with murals,” ANI tweeted on January 12.

This year’s festival is an “ardh Kumbh,” a mid-term version between two Kumbhs, although the scale of preparations does nothing to suggest its diminutive status in the scheme of Melas. In fact, it’s much bigger than the last full Kumbh held in 2013, which was moreover, a Maha Kumbh taking place every 144 years.

According to national media, this year’s Kumbh has been provided a total outlay of Rs 2,800-4,300 crore from the state government budget for the facilities listed above, although BBC reports that the budget for hosting this year’s festival is Rs. 28 billion.

The mini city that has been set up across 3200 acres is double the area of the last Kumbh, according to Awanish Kumar Awasthi, Additional Chief Secretary, Information and Tourism in the Uttar Pradesh government. Some 6,000 religious and cultural have been allotted land on which to put up a city of tents to accommodate visitors from India and across the globe.

UNESCO describes the event as the biggest “peaceful congregation of pilgrims on earth,” which begs the question why such elaborate and expensive security measures are required.

However, the upgrade in security this year might help ensure that Kinnar saints of the Vedic Sanatan Dharma aren’t heckled. Kinnars or hijras have always reserved a special place in Hinduism although this is the first time transgender devotees and patron saints have been given a space at the Kumbh Mela. But not everyone is happy about sharing the space with them, especially since the umbrella of Hindu saints and ascetics, Akhil Bhartiya Akhara Parishad, is yet to them.

In case the event wasn’t already  enough, it is also worth noting that the issue of the Ram Mandir will take a central stage during the Mela this year. In fact, the VHP will hold a Dharma Sansad at Prayagraj on January 31. The event will present the deeply intertwined nature of our faith, culture politics before the whole world over the next 50 days.