Until around the end of the 17th century, Heaven was primarily about the Beatific Vision. 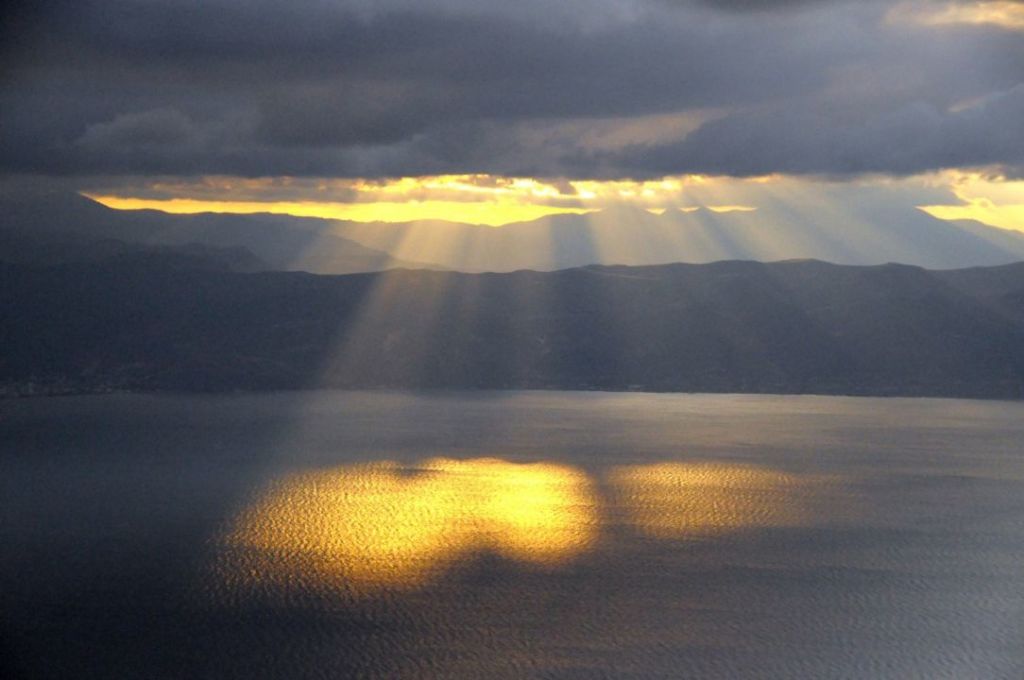 What will Heaven be like? Perhaps not surprisingly, competing images abound. Until around the end of the 17th century, Heaven was primarily about the Beatific Vision. The perfect happiness of eternity in Heaven consisted in the worship, praise and adoration of God along with the angels, saints, martyrs, Old Testament worthies and even some noble pagans like Plato and Aristotle.

This was seeing God “face to face”, and not through “a glass darkly”. It was an eternity centred on God or the heavenly Christ. Thus, The Last Judgement (1425-30) by Fra Angelico shows Christ seated on a throne surrounded by the angels, Mary and the saints. His right hand points up to Heaven, his left towards Hell. On Christ’s right, angels are taking the saved through a paradisal garden to a heavenly walled city, while on his left, demons are driving the wicked into Hell.

Fra Angelico’s The Last Judgement, with Christ seated at the centre on the throne. Wikimedia Commons

Traditional Judaism was somewhat reticent about the life to come. But when it was spoken of, it was primarily in terms of the spiritual vision of God. As one third-century rabbi explained it,

In the world-to-come there is no eating, no drinking, no mating, no trading, no jealousy, no hatred, and no enmity; instead, the righteous sit with crowns on their heads and enjoy the splendor of the divine Presence.

Islam too has the idea of a Beatific Vision. But Heaven is also very much a place of sensual delights. In the Islamic Paradise, the blessed will reside in gardens of bliss, on couches facing one another. A delicious cup of wine from a flowing stream will be passed around from which none will suffer ill effects. Fruit and meat will be available. And there will be maidens, “with dark, wide eyes like hidden pearls – a reward for what they have done” (Quran 56.22-4).

Within Christianity, the image of a God-centred Heaven was to last well into the 19th century. As Bishop Reginald Heber (1783-1826) put it in his hymn Holy, Holy, Holy:

all the saints adore thee, Casting down their golden crowns around the glassy sea; Cherubim and Seraphim falling down before thee, Which wert and art and evermore shalt be.

But from the middle of the 18th century until the end of the 19th, there was a gradual transition to a Heaven centred on human activities. The medieval notion that the happiness of those in Heaven would be improved by being able to see the sufferings of the damned in hell disappeared, not least because, as people became more disinclined to see the public sufferings of others in the here and now, the notion of hell as a place of eternal physical punishment was beginning to disappear. There were hints developing that all could eventually be saved, at least if they wanted to be.

Heaven was now closer than it was earlier – only a thin veil separated the living from the dead. It was also a continuation of material existence, only without the sufferings of this present life. Although Heaven remained a place of rest, the saved were increasingly active, making moral progress in a joy filled environment. Human love replaced the primacy of the divine love. Relationships between people became fundamental to the afterlife, not a distraction from it and families were re-united.

If not often eroticised, as in William Blake, the modern Heaven was romanticised. Lovers too would meet again.

Thus, for example, in the final version of his poem The Blessed Damozel (1881), Dante Gabriel Rossetti has his damsel looking longingly over the bar of Heaven upon the earth beneath hoping for the soul of her lover to come to her while

Around her, lovers, newly met / ‘Mid deathless love’s acclaims / spoke evermore among themselves / Their heart-remember’d names.

The Victorian Heaven was very much a domesticated, genteel and well-mannered affair. It was a kind of ethereal Victorian holiday resort with entertainments attached – Moses lecturing on the Ten Commandments at 10am in the main auditorium followed by a performance of Handel’s The Messiah (conducted by the composer) at 2.00 pm. A God-centred Heaven was marginalised.

Elizabeth Stuart Phelps (1844-1911) in her best seller The Gates Ajar summed up the passing of the old style Paradise:

There was something about adoration, and the harpers harping with their harps, and the sea of glass, and crying Worthy the Lamb! that bewildered and disheartened me so that I could scarcely listen to it. I do not doubt that we shall glorify God primarily and happily, but can we not do it in some other way than by harping and praying.

All this required the right sorts of bodies. In the modern Heaven, we would have “spiritual bodies”, rather like the angels. But they would not be like those at the time of our deaths. Rather, they would be made perfect and at the perfect age – that of Christ during his ministry on earth, that is, about 30 to 33 years old. Those who had died in infancy or were severely deformed would be made perfect.

Faith in a perfect and loving God was also much tested in the 19th century by the suffering of animals in this present life having no compensation in the next. New companionate relationships between people and their pets led many to wonder how their happiness in Heaven could be complete in the absence of animals who had loved and been loved so much. So the issue of animals in Heaven came on to the agenda for the first time.

It was in the middle of the 19th century also that the spirits themselves seemed to decide that, rather than us seeking them out in their heavenly homes, they would seek us out in ours. This was the age of spiritualism when the spirits of the departed manifested themselves in a bewildering variety of ways. The ritual of connecting with the dead in the séance no doubt provided consolation to those who received message from a deceased love one.

But the séance also provided entertainment for the curious, phenomena to be explained for the scientist and provoked frissons of horror for the believer or amusement for the sceptic. For the conservative Christian, to attend a séance was to dabble with the Devil. For the more credulous and adventurous, this was no doubt part of its attraction.

Within spiritualism, as within the modern social Heaven more generally, God played a minimal role. So belief in Heaven remained strong, as it does still, even when belief in God was on the wane. God as a frightening judge and the enforcer of morality was replaced by deceased parents, aunts and uncles looking down upon us from the outer reaches of the universe.

By the 20th century then, Heaven had become secularised and the modern Heaven part of the secular modern mind. Ironically perhaps, as it did so, in Catholic and Protestant theology, at least on the more liberal side, the afterlife became an afterthought. Within liberal Christian theologies, the meaning of life was not to be found in what came after it, but during it, through radically transformed individuals (in existentialist theologies or radically transformed societies (in liberation theologies).

Within a more mystically inclined modern Christianity, the eternal was not to be found in the future but in the present: “To see a World in a Grain of Sand And a Heaven in a Wild Flower, Hold Infinity in the palm of your hand And Eternity in an hour”, as William Blake put it.

Uncertainty about the afterlife generally is perhaps why modern Christian funerals have become more about celebrating a life that was than rejoicing in a life that is yet to come.

Still, in spite of our present day uncertainties about the existence of a life to come, our contemporary Heaven combines features of both the God-centred Heaven and the social Heaven that replaced it. It is no longer thought to be, as it was in previous times, a geographical place way beyond the stars, although it is still metaphorically “up there”.

Heaven is also still the place where God is thought to live – a state in which we will be closer to a loving father God. “There in my Father’s home, safe and at rest, There in my Saviour’s love, perfectly blest” as the popular hymn Nearer my God to Thee puts it.

It is still believed that angels dwell there, occasionally doing good works on earth. But the highly developed angelology of 1000 years ago has virtually disappeared.

Heaven is widely regarded as a state after death in which we continue to have a consciousness of ourselves and memories of our life on earth. Along with this, there remains the conviction that we will be reunited with those whom we loved on this earth. Life there, as on this earth, will be one in which we laugh, love and grow ethically, intellectually and spiritually.

Although we will no longer be in physical bodies, there remains the hope, if not the certainty for some, that we will be recognisably ourselves. So Eric Clapton wonders, in his 1992 Tears in Heaven, if his deceased son will recognise him when he arrives in Heaven.

In contrast to earlier times when Heaven was exclusive to Christians or Muslims or Catholics or Protestants only, it is now expected that Heaven is a “place” to which everyone will go or, at least, those who have lived a “good” life.

As in times past, Heaven is seen as a place of supreme happiness, joy and contentment. So, experiences of great joy on this side of the grave are said to be “heavenly”. As Fred Astaire reminds us in the film Top Hat (1935): “Heaven, I’m in Heaven … when we’re out together dancing cheek to cheek”.

In short, this life, despite all its sorrows and miseries, provides occasional glimpses of the next. The life to come – it is believed – will be this life made perfect.

Philip Almond is the Emeritus Professor in the History of Religious Thought, The University of Queensland.