What a new government in Spain means for Catalonia

Sanchez successfully ousted his predecessor Mariano Rajoy by passing a motion of no confidence against the Partido Popular government. By Simon Toubeau and Pere Almeda

Spain’s new prime minister Pedro Sanchez rose to office against a backdrop of unprecedented drama. But now he could capitalise on the circumstances that landed him the top job to resolve the conflict with Catalonia.

Sanchez successfully ousted his predecessor Mariano Rajoy by passing a motion of no confidence against the Partido Popular government. Seizing on the unique opportunity offered by the sentencing of several prominent PP officials in a long-running corruption trial, the opposition leader moved quickly.

Sanchez needed at least 176 votes but his Socialist party (PSOE) only had 84 seats and Ciudadanos, a centrist-liberal formation with a strong Spanish nationalist rhetoric, wouldn’t endorse a new left-wing government. So, Sanchez needed to muster the support of all other parties in the Spanish parliament. This included the left-wing party Podemos, and several nationalist parties from the Basque country and Catalonia, such as Esquerra Republicana de Catalunya (ERC). 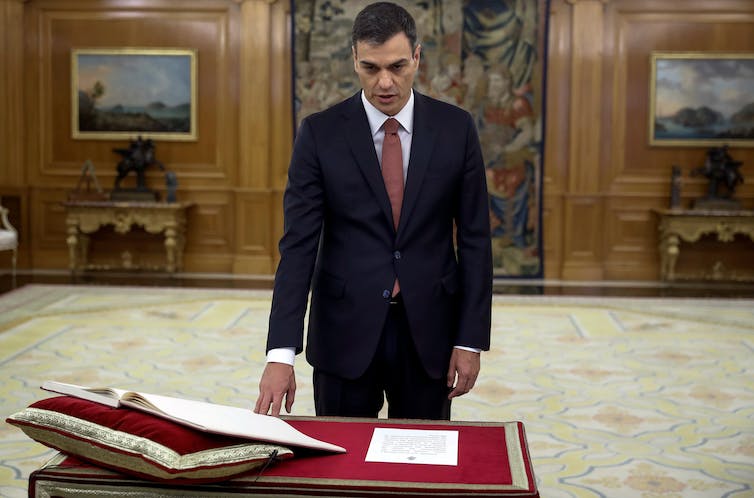 At the same time, in Barcelona, Quim Torra – a Catalan nationalist hand-picked by the exiled former president Carles Puigdemont – was elected leader of a new Catalan government. This came after months of protracted negotiations that followed the extraordinary regional elections of December 2017. These were called by the Spanish central government immediately after it suspended the Catalan government for having symbolically issued a unilateral declaration of independence after the referendum held on October 1.

But any hope from Madrid that these elections would quell nationalist fervour backfired. The three parties in favour of Catalan independence (JuntsPerCat, Esquerra Republicana de Catalunya, Candidatura d’Unitat Popular) returned to parliament with a majority (albeit a slim one), determined to pursue their cause, setting them on a collision course with Madrid.

To avert this collision, Sanchez must now make good on the promise he made to his Catalan parliamentary allies to engage in a constructive dialogue with the Catalan government on how to resolve the ongoing conflict.

The basis of a deal

At the basis of the deal between these parties was the common goal of ousting Rajoy from power. The Catalan parties will offer stability for the Spanish government: support for the continuation of a minority PSOE administration until the end of the legislature in 2020 and support on the party’s economic and social policies.

In exchange, the PSOE will need to make progress dealing with Spain’s unsolved national and territorial conflict since its transition to democracy in the late 1970s.

In the short term, Sanchez must de-escalate the conflict by putting an end to the acrimonious relationship between Spain and Catalonia. That means being willing to listen and to talk. There is already a ring of cautious optimism on that front. Sanchez seems prepared to engage in dialogue – unlike Rajoy.

Then Sanchez must restore the Catalan government’s authority, restoring devolved powers to the regional parliament. He will also have to deal with the trickier matter of the nationalist leaders who were jailed last autumn. This is a fundamental demand among many Catalans, who see them as political prisoners. But it may not be easy for the party to intervene in a judicial process without it looking like obvious political meddling.

In the longer term, Sanchez will need to think creatively about how to engage the Catalan government over Catalonia’s constitutional future within Spain. He will be treading a thin line, either side of which stand staunch opponents. On one side are the dyed-in-the-wool Catalan republicans, who harbour a seemingly irrepressible will to assert Catalonia’s right to decide its future. They will almost certainly demand a new, legally sanctioned referendum on self-determination. On the other side are the defenders of national unity, the PP and Ciudadanos, which may well soon take over the mantle of Spanish nationalism. They hold an equally firm view that any concession on the issue of self-determination is not permissible. That view is shared by an important portion of Spanish public, many of which vote for the PSOE. With a dwindling basis of electoral support, Sanchez can’t afford to alienate them.

So Sanchez will have to remain committed to accommodating Catalonia within the framework of the constitution. What that eventually looks like will depend on what is made possible by the political coalition that supports reform. One potential strategy available to the PSOE is to (re)capitalise on its ties with the Catalan Socialist Party to reach out to moderate nationalist forces in the Catalan parliament. They could hash out an agreement over potential federal constitutional reform.

At the heart of any reform are two major longstanding demands that will have to be addressed. The Catalan government wants a new fiscal settlement and for Catalonia to be recognised as a distinct nation within Spain. These reforms can be achieved through a revision of Catalonia’s statute of autonomy and would need to be ratified in a referendum by Catalan voters.

National recognition would represent an acknowledgement of Catalans’ sovereignty and their “right to decide” their constitutional future – albeit within the parameters set by the Spanish constitution. A referendum on a new statute could also open the door to a democratic option on independence. However, at this point, that’s unlikely to happen. The main difficulty will be to ensure this new statute can’t be overturned by future judicial challenges that may water it down.

A narrow chance for success

The deal brokered to support the socialist minority government is still fresh and there isn’t a huge amount of trust between the parties. There’s even some lingering hostility. So while there is a chance to solve the conflict with Catalonia, it’s narrow. The deal may yet break down.

But if parties on all sides are prepared to listen to divergent political views – and if Sanchez’s party can show creative spirit – there is hope that a political change in Spain could bring about a constructive dialogue. That, in time, could form the basis of a renewed relationship between Catalonia and Spain.