A memorial service for Al Jazeera correspondent Shireen Abu Akleh was held on Thursday, but it wasn’t without some unfortunate moments… 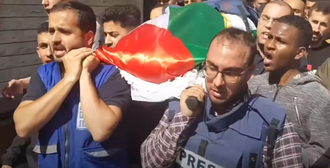 Abbas said in a speech that he rejected Israel’s offer for a joint investigation into the killing and vowed to take the case to the International Criminal Court.

Shireen Abu Akleh, a trailblazing Palestinian journalist, was fatally shot on Wednesday while covering an Israeli army raid on the Jenin refugee camp in the West Bank.

The Palestinian Authority president, Mahmoud Abbas, described her as a ‘martyr for truth and for the free word.’

As the journey began to take her body from the St Louis French Hospital in Jerusalem to a local church, disturbing scenes emerged, as Israeli forces allegedly beat coffin bearers and mourners gathered at the site.

Live stream video footage showed Abu Akleh’s coffin almost falling from the shoulders of the pall bearers as they were chased by security forces.

Israeli forces reportedly wanted mourners to travel in cars rather than walk with the slain journalist’s coffin in the streets.

As protest against this policy erupted and chaos ensued, ther coffin was eventually placed in a hearse and driven to the church where a funeral service would take place.

Abu Akleh, 51, was given what was described as a full state memorial and she will be buried alongside her parents at Mount Zion Protestant Cemetery cemetery, near Jerusalem’s Old City.