How to spot a launda or desi frat boy

The Desi Frat Boy has a superiority complex. He’s misogynistic, vile, and homophobic. Should we blame him for being a douchebag or our patriarchy? 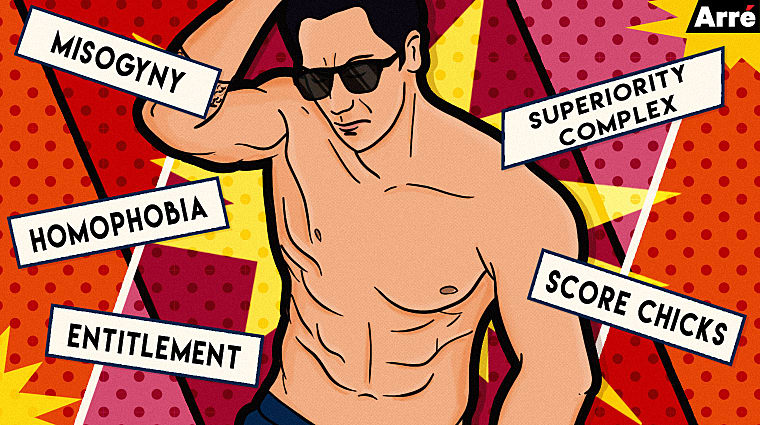 t get-togethers with old friends and acquaintances, you may have noticed a creature that is as intriguing as he is vile. He is a mix of misogyny, homophobia, and has a distinctly desi superiority complex. He is the one saying stuff like “Bang her, bro” and “You look like a fag.” This, ladies and gentlemen, is the Desi Frat Boy, an Indian version of the American frat boy, who we’ve come to identify with obnoxious behaviour and a penchant for SUVs and Abercrombie.

Our desi counterpart somehow manages to be even more obnoxious without having been part of any fraternity. You know him from your primary school days: He’s the guy who’d count up to 20 instead of 100 during his “den” at chhupan chhupai. When it would be his turn to hide, he’d probably sneak off, leaving you looking for him until you were tired and cranky.

When you reached your tweens, he was the one who’d stick chewing gum on your chair as a joke, or worse, hold a pen, tip up on the chair, just as you were about to sit. If you try to account for it now, you’ll realise that throughout school, he has ripped you off of at least ₹1000 worth of stationery because he never carried his pencils and erasers and didn’t think to return yours.

While playing galli cricket, he’s the kind of guy who will bat first and then run home when it’s his turn with the ball. When you decide to have a match with another group, he’ll throw a very public tantrum because he wants to open the batting, even though he is barely good enough to bat at No 11. These are early signs. As the Desi Frat Boy turns 16 or 17 (an age at which his mental development ceases), things get a little more difficult to handle.

Gifted with entitlement, the Desi Frat Boy takes the saying “the personal is universal” a little too seriously and believes that his opinions are facts. His pack – the dudebros – has a huge hand in encouraging this behaviour. They’ve never really understood what opinion means. When confronted with a PoV contrary to his – like The Dark Knight is not the best film ever made – the Desi Frat Boy makes an expression similar to one Salman Khan makes while trying to think of a word with three syllables.

If you make a joke at his expense, he suddenly turns angsty, behaving as if the whole world is against him

The Desi Frat Boy gets his sense of superiority from his Class 10 and 12 scores in math and science. He has a huge chip on his shoulder for having studied science; he has only derision for anyone who has studied the liberal arts. But he often displays contradictory behaviour. While watching Fight Club, the Desi Frat Boy experiences pleasure that is quite similar to an arousal, and, in some cases, an ejaculation. You may wonder if he believes that films are made by people who study math and science.

Every now and then, the Desi Frat Boy mansplains and talks to women like they’re five-year-olds who need to be humoured. But a more distinctive trait he has is “mathsplaining” – explaining to a group of adults that surge fares on Uber and Ola are a result of something called “demand and supply”, as if it’s a concept only someone with a Masters in Economics is aware of. Naturally, the Desi Frat Boy’s favourite TV shows are Entourage and Californication. He claims it’s because they contain the most nudity and sex, but it’s more because of the normalisation of the male gaze, misogyny, and homophobia. For the most part, though, he believes that TV is for “sissies,” because real men go out, chug beer, and score chicks in their free time.

The Desi Frat Boy and his sense of entitlement makes him humourless. If you make a joke at his expense, he suddenly turns angsty, behaving as if the whole world is against him (much like Bhaijaan). How dare you attack something as fragile as his ego? In such situations, his dudebros step in to treat him like their five-year-old raja beta. How will he survive if not mollycoddled?

One can only guess why the Desi Frat Boy is the way he is. Perhaps an extremely patriarchal upbringing, where machismo was applauded and femininity mocked. Perhaps growing up with older brothers who beat and bullied him, making him feel the need to go on the offensive with his peers so that he wouldn’t be the butt of all jokes. Or perhaps a combination of both.

Despite such discernible traits, the Desi Frat Boy hides in plain sight because ingrained patriarchy has ensured that most of us aren’t woke enough to see the signs of toxic masculinity. It helps that he’s always surrounded by apologists, making excuses for his behaviour. He doesn’t seem to have trouble finding dudebros, or even women to date. Every time you learn he’s in a relationship, you feel a wave of sympathy for the woman he is going out with, but not before you remember the line directed at Johnny “Drama” Chase from Entourage: “Someone went out with him?”