The new Naval Ensign has been unveiled by the Prime Minister of India early this September, during the glorious and auspicious occasion of the commissioning of the indigenously built Indian Aircraft Carrier -INS Vikrant, and thus, it was an apt moment for heralding the change of the Indian naval ensign. 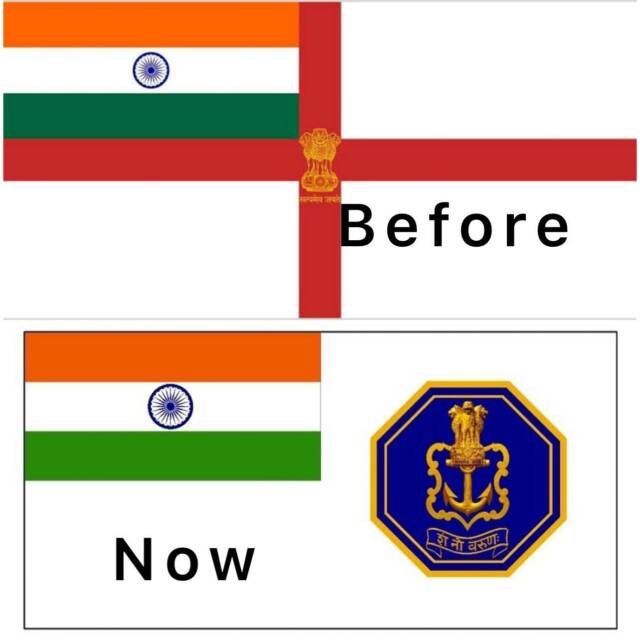 End of a colonial era! The Saint George’s cross which has been there on the Indian Naval flag, since the British rulers put it during the pre-independence, has been removed from the new Indian Navy flag lately.

As a symbol of national pride, the erstwhile Indian Naval Ensign included the National Flag in the upper left canton, red vertical and horizontal stripes and a golden yellow State Emblem superimposed on the intersection of the red stripes. The national motto ‘Satyamev Jayate’ engraved in Devanagari script, was included underneath the State Emblem. This White ensign has been flown by all formations, ships, and establishments of the Indian Navy till 01 Sep 22.

Resonant to the ongoing national endeavour to move away from colonial past, a need was felt to transition to a new design that drew inspiration from our history. To address this necessity, design inputs were invited from the entire Naval fraternity. Responses poured in from Naval personnel from all formations and various hierarchies, reflecting enthusiasm for the endeavour, and have helped in developing the new design of the Naval ensign.

The new White Naval Ensign identified nation-wide with the Navy, now comprises two main constituents – the National Flag in the upper left canton, and a Navy Blue – Gold octagon at the centre of the fly side (away from the staff). The Octagon is with twin golden octagonal borders encompassing the golden National Emblem (Lion Capital of Ashoka – undescribed with ‘Satyamev Jayate’ in blue Devanagari script) resting atop an anchor; and superimposed on a shield.

The Navy Blue colour of the above octagonal shape depicts the Blue Water capabilities of the three dimensional cohesive – Indian Navy. The twin octagonal borders draw their inspiration from Shivaji Maharaj Rajmudra or the Seal of Chhatrapati Shivaji Maharaj, one of the prominent Indian kings with a visionary maritime outlook, who built a credible Naval Fleet that earned grudging admiration from European Navies operating in the region then at that time.

The Octagonal shape also represents the eight directions (four cardinal and four inter cardinal), symbolising the Indian Navy’s global outreach. The Octagon stands for good fortune, eternity, renewal and draws positive energy from all directions. The new Naval White Ensign is thus rooted in the glorious maritime heritage of India, as well as reflective of our Navy’s present –day capabilities.

Commenting with his thoughts, on this crucial and significant change, Commodore Srikant Kesnur (retd) Indian Navy and a Naval Historian now, said “Insofar as the change of Naval Ensign is concerned, two things are clear and matter of historical record. First, the St George’s Cross was a colonial symbol with significance for Britain and second, the Indian Navy had been considering changing it from the late 70s/early 80s. In fact, the change in 2001 reflected that desire.

Therefore, dropping that may be considered as a welcoming development. Furthermore, having a resemblance of the Maratha Octagonal Seal design in the New Ensign recognizes the glorious exploits of the Marathas.

While respecting others’ opinions in this regard, I do not subscribe to this false binary of Marathas versus Cholas or any other Maritime entity of the past. I do not see this as a zero-sum game because both Cholas and Marathas and indeed many other Kingdoms had a worthy Maritime tradition that we must respect”

The Hon’ble President of India has approved the introduction of the new designs of the Naval Ensign, as also the Distinguishing Flags, Masthead Pennants, and Car Flags for the Indian Navy.

“Insofar as design, colour etc are concerned these are sterile debates to this change. Everyone is entitled to their own view on this based on their aesthetic sense. However, it must be remembered that the loyalty of the Soldier and the Sailor is to the Flag and not the design. He or She records the look and internalises the same.  Thereafter their fidelity to the Service and the nation is reflected through their honour to the Flag, and that remains irrespective of the design changes” added another senior retired Naval officer in confidence of anonymity.

The new Naval Ensign has been unveiled by the Prime Minister of India early this September, during the glorious and auspicious occasion of the commissioning of the indigenously built Indian Aircraft Carrier -INS Vikrant, and thus, it was an apt moment for heralding the change of the Indian naval ensign.

INS Vikrant adorned the new White ensign with effect from its commissioning. Formations, ships, and establishments of the Indian Navy are adopting the new Naval ensign, as also the new distinguishing flags, car flags and masthead pennants.