Poor policy is failing the elderly in India’s unorganised sector

Faced with financial insecurity and a lack of job opportunities in the unorganised sector, India’s elderly workers need better policies and pension schemes. 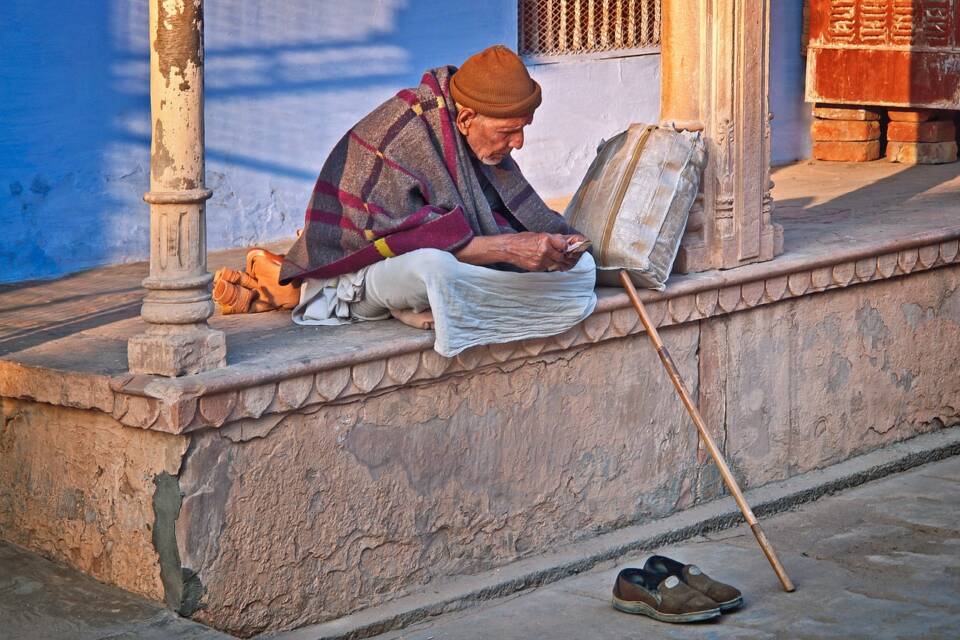 ‘India has the world’s largest young workforce’ is an oft-repeated adage attached to the demographic dividend of the country. The immense excitement for the potential of India’s youth has seemingly overshadowed the fact that, given the nation’s falling mortality rate, its population is rapidly getting old. The recent Youth in India 2022 report by the Ministry of Statistics and Programme Implementation has recognised this shifting demographic phenomenon. According to the report, the youth population (aged 15–29 years) is expected to grow initially before declining in the second half of the period from 2011 to 2036. The proportion of youth in the total population increased from 26.6 percent in 1991 to 27.9 percent in 2016. Their share in the population is then projected to decline to 22.7 percent by 2036. On the contrary, the proportion of the elderly in the total population has increased from 6.8 percent in 1991 to 9.2 percent in 2016 and is expected to reach 14.9 percent in 2036. According to another forecast, by 2061, every fourth person in India will be over 60.

As India’s population ages, we need to start thinking about those among the elderly that are more vulnerable. This includes elderly workers in the unorganised sector, which employs more than 90 percent of the nation’s workforce.

Elderly workers in the unorganised sector are highly vulnerable

The signs of discomfort are already appearing in the data. A total of 138.54 lakh individuals aged 61 and above availed work benefits under the Mahatma Gandhi National Rural Employment Guarantee Act (MGNREGA) scheme in 2020–21. This number has been increasing each year—it was 100.08 lakh in 2019–20 and 93.85 lakh in 2018–19. Elderly people are falling back on safety nets such as MGNREGA, and this is a telling sign of the lack of old-age care they experience.

The absence of financial security also appears to be a significant threat to the elderly, who do not have enough options and opportunities to earn money. Currently, approximately 25 lakh individuals are covered by the national pension system under the unorganised sector category. This number forms only about 0.6 percent of the total estimated size of the informal sector in India. These statistics are a cause for concern as the demographic size of the elderly is only going to rise.

Individuals who participate in the informal sector do not have a cut-off age similar to the retirement age in the formal sector. The low wages and income insecurity of the informal sector leads individuals to a point where they have to work on a daily basis to earn. Swaniti visited a naka (labour market) in the city of Pune as part of a study on social protection for unorganised workers in Maharashtra. During the visit, we observed that young people seem to dominate the naka for work and older people tend to have a harder time getting hired. Ageing leads to lower physical strength, and it is more feasible for the contractor to hire someone younger who can do more physical work. A senior citizen at the naka in Pune remarked, “We do not have anyone to care for us so we have to come to find work here, and contractors do not want to hire us because we are old—they assume we will not be able to do heavy lifting work”.

As there is no specific retirement age in the informal sector, individuals work as long as they physically can. Wages are low and depend on actually getting work on any given day. This economic reality leaves a lot of individuals in constant need for daily work. As an individual gets older, their ‘market value’ seems to decrease. Older workers want to work every day to sustain themselves, but they find it tougher to compete with swathes of younger people (who are facing an unemployment crisis themselves and have to resort to the informal sector) showing up at establishments such as the nakas.

Public and private sector policies need to step up

Established in 1999, the National Policy on Older Persons (NPOP) was one of the first major policies directed at the nation’s elderly population. Currently, the umbrella policy that targets the senior population of the country is the Atal Vayo Abhyuday Yojana (formerly known as the National Action Plan for Senior Citizens or NAPSrC). This plan looks at several aspects of senior citizens’ lives, including, but not limited to, their basic needs. The policy also advocates for intergenerational ties between the young and the old, and aims to ensure active and productive ageing via regional resource and training centres across the country.

There are also two targeted pension schemes that are focused on the informal sector in India—the Pradhan Mantri Shram Yogi Maandhan (PMSYM) and the Atal Pension Yojana (APY). The PMSYM focuses on unorganised sector workers who are in the age group of 18–40 years and have a monthly income of INR 15,000 or less. Post the age of 60, they are assured a pension of INR 3,000 per month. APY focuses on poor and unorganised sector workers in the age group of 18–40 years and presents levels of pension post retirement ranging from INR 1,000–5,000 per month. Both these schemes are voluntary and contributory in nature. However, the idea of locking in sums of your hard-earned money with the government and only being able to redeem some value out of it years later is tough to digest for people who struggle to find work on a day-to-day basis.

Bridge the Gap, a 2022 study by HelpAge India on the needs of the elderly, displays concerning insights about how long the road is to provide a life of care and dignity to India’s elderly. Out of the sample of elders surveyed, 47 percent are forced to ask for money from their families and 21 percent are forced to work for a living. Additionally, 57 percent face immediate financial insecurity. Approximately 45 percent reported inadequacy of pensions and 38 percent reported lack of employment opportunities as their reasons for financial insecurity. These data points highlight the absence of options that might offer the elderly independence and control over their own lives.

A useful addition to the national plan can be a special focus on healthcare provisions for former informal sector workers. Senior individuals who engage in informal work due to distress can end up with a life of ailments and pain. HelpAge India’s report points to the fact that 67 percent of elderly persons do not have any health insurance and only 52 percent of them are able to access their healthcare options.

The primary reason for senior individuals to work under distress in the informal sector is the lack of money and savings to lead a retired life.

It is not advisable for the elderly to engage in physically demanding work. The informal economy’s poorly regulated safety environment poses an additional threat to them. The national plan can focus on making sure such individuals are brought into a protective net of hospice and care.

The primary reason for senior individuals to work under distress in the informal sector is the lack of money and savings to lead a retired life. This signals the need to provide an equitable and inclusive retirement and pension plan for senior citizens in the informal sector. Pension schemes provided by the state can have a component that allows for free exit from the scheme at various points of time, instead of just the one exit point at 60 years.

The private sector should also be involved in this space as it relies on the work done by the informal sector. Individuals who work under subcontracted units should be put under the aegis of the formal corporations they indirectly work for, and can be provided with pension options and healthcare options. Workers who spend a set amount of time at subcontracted informal sector units that work for larger organised companies in the private sector must be provided with options for a pension scheme. This will be a way of rewarding work loyalty. Pension schemes largely end up ballooning the spending of the company over the years, so other options such as hospice care and old-age housing can be ideated upon further. CSR funding can also have a focused and challenging component of taking care of the elderly population of the region where the companies are active. Ultimately, the question of an ageing workforce has to be dealt with by both the state and the market so as not to overload one or the other to take care of the elderly.

It is crucial to focus on the older workers in the informal sector as they might be the ones to fall into vulnerability the fastest. India is ageing, and it needs the ability to age with dignity.

Sujay Pan is a senior data and policy analyst at Swaniti Initiative. His current work is directed towards improving social protection for migrant and informal workers in Maharashtra. His interests lie in data and the state and the future of work and labour.