After a dominating 224-run victory in the fourth ODI in Mumbai, India and the West Indies will battle it out in the final ODI today at the Greenfield International Stadium, Thiruvananthapuram. 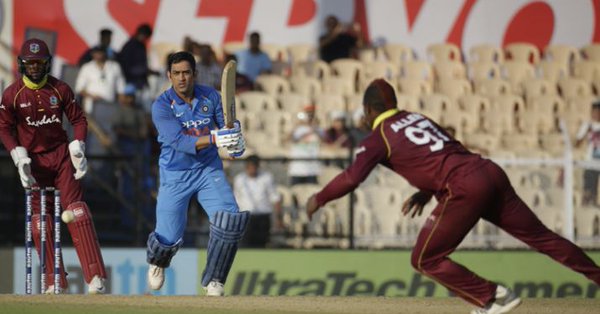 India will be going into the match with a 2-1 series lead. Credit: Twitter/@indiatvnews

After a dominating 224-run victory in the fourth ODI in Mumbai, India and the West Indies will battle it out in the final ODI today at the Greenfield International Stadium, Thiruvananthapuram.

Rohit Sharma (162) and Ambati Rayudu (100) were powered India to a commanding total of 377/5 in the fourth ODI. The Windies’ hopes of reaching the target went up in smoke thanks to a brilliant spell by young left-arm pacer Khaleel Ahmed.

Ahmed picked up a wicket in each of his first three overs, and put the Windies in a tight spot at 56 for 6 within 14 overs. After that, Kuldeep Yadav ran through the Windies’ lower order as India recorded their third biggest ODI victory.

Both teams will be looking forward to the fifth ODI. West Indies will be determined to end the series on a high. On the other hand, India will look to maintain their winning run in ODI bilateral tournaments at home.

The pitch in Trivandrum seems to be in unknown condition. However, it might remain on the slower side. If that is the case then India could be depend upon Ravindra Jadeja, Kuldeep Yadav, and Yuzvendra Chahal. Bhuvneshwar Kumar could be rested.

In terms of batting, Ambati Rayudu’s hundred in the previous game could be a game-changer. All eyes willl be on skipper Virat Kohli, who has scored three centuries in as many matches.

For the visitors, Shimron Hetmyer and Shai Hope continue to be the main men in the batting department. However, others like Chanderpaul Hemraj, Rovman Powell, and Kieron Powell could be expected to contribute significantly.

The Windies will want to allay concerns in their bowling department. Kemar Roach, Obed McCoy, and Oshane Thomas have been ineffective with the ball. Ashley Nurse’s injury further complicates matters for the visitors.

India could likely keep the same playing XI as they look to finalize their line-up ahead of the 2019 Cricket World Cup. The Windies could introduce a few changes, particularly in the bowling department. Fabian Allen could lose his to the experienced Devendra Bishoo.

M.S. Dhoni one run away from milestone

Out of the 331 ODIs, Dhoni has played 328 for India and three matches for Asia XI in 2007, which were also granted ODI status.

Dhoni so far has scored 9,999 runs for India and is just one run short of reaching the 10,000 run mark. The former India captian will surely look to join the 10,000 club for India, which features the likes of Virat Kohli, Sachin Tendulkar, Rahul Dravid, and Sourav Ganguly.