I grew up on my mother’s radio-ordained playlist of Lata Mangeshkar and Mohd Rafi. But as a teenager, when every girl in school fawned over the Jonas Brothers and Taylor Swift, I, too embarrassed to ask my classmates the names of the songs they were singing, turned to Google. 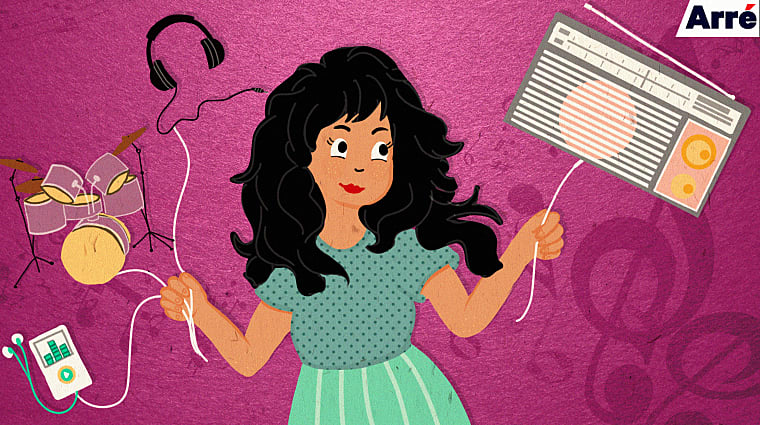 I grew up on my mother’s radio-ordained playlist of Lata Mangeshkar and Mohd Rafi. But as a teenager, when every girl in school fawned over the Jonas Brothers and Taylor Swift, I, too embarrassed to ask my classmates the names of the songs they were singing, turned to Google. It eventually dawned on me: I didn’t care about fitting in.

Early mornings in my house are set to the soundtrack of Hindi music blaring loudly off my mother’s radio. It’s a household tradition that goes back as far as I can remember. Being the early bird that she is, Maalways scurries off the bed, careful not to wake up the rest, before the crackling sound of static announces that she has made her way to the radio set. It’s a part of her routine now, one that has elicited joy, annoyance, resignation, and acceptance from me at different points in my life. But whatever my reaction, sure as the sun rises in the East, Ma will greet every morning with her trusted radio.

My earliest memory of our radio set goes back to the late-’90s, a time when “Taal Se Taal Mila” was my unofficial wake-up call. And it didn’t quite stop there. From “Kya Kare, Kya Na Kare” to “Mujhko Kya Hua Hai”, mom’s morning radio shows were my younger self’s first step into the world of latest Hindi music. Evenings, however, often saw a switch from the radio and its up-to-date playlist to the prized collection of cassette tapes. Kishore Kumar, Mohammed Rafi, and Lata Mangeshkar were our household’s holy trinity – a trifecta of melodious voices and songs that I barely recognised, yet enjoyed wholeheartedly. The radio would temporarily be put to rest, only to be blaring again the next morning.

An easy, hassle-free routine of peaceful co-existence had settled upon us.

But as the mid-2000s rolled in, this peace was disturbed. The new millennium brought new technology into our home, and divided our interests. Teenage years are confusing, both for growing teens and their parents. While Ma busied herself with learning how to use the radio on her cellphone and finding CD versions of her beloved cassettes, I was making the acquaintance of the internet. She couldn’t quite understand this change in our routine. She didn’t realise why I no longer cared to wake up to the strains of Alka Yagnik or Udit Narayan.

Too embarrassed to ask my classmates the names of the songs they were singing or enthusiastically talking about, my Google search history was a compilation of the snatches of lyrics I had stowed away in my memory.

Little did she know that I had discovered the wonders of YouTube and LimeWire, which sowed the seeds for my own collection of (illegally downloaded) music. The power of technology allowed me to sidestep the daily onslaught of “Kya Hua Tera Wada” from Ma’s radio. As every girl in school fawned over the Jonas Brothers, experienced heart breaks with Avril Lavigne, Taylor Swift and more, Google had become my saviour. Too embarrassed to ask my classmates the names of the songs they were singing or enthusiastically talking about, my Google search history was a compilation of the snatches of lyrics I had stowed away in my memory. A testament to my attempts to not be seen as an outcast.

For the next five years, my teenage angst grew, finding a vent in remarks like, “Maa, tukka kaale kalla na!” (My Bambaiyya Konkani for “Maa, you don’t understand anything!”) There was a constant need to be seen as “cool” by my peers, which meant getting pocket money for no reason, having access to a cell phone (even if it only just belonged to your parents), and belting out poppy English numbers. Listening to Ma’s purane Hindi gaane definitely did not make the grade.

Freed from my mother’s playlist, I no longer stood out like a sore thumb. Ma didn’t understand my change of heart, but she wasn’t going to let a pesky, hormonal teenager ruin her leisure time. I had tried to distance myself from the Hindi songs in vain. Music from singers who were long gone even before my existence, continued to reverberate through the walls of my house, and the inside of my mind, despite my best efforts to shut it out.

It was exhausting. After five long years it was slowly starting to sink in – I didn’t care as much about fitting in as I had once thought.

The new millennium brought new technology into our home, and divided our interests.

I’m no longer bound to the same crowd I once made such insincere efforts to impress. Growing out of the need to define what’s “cool” led to growing up. My friends couldn’t care any less if I belted out some Kishore Kumar while they sang The Greatest Showman’s entire discography. There is no need to pretend about the music I like and don’t, and if I haven’t heard of that indie band yet, I am no longer looked down upon.

This morning, I caught myself humming along to “Dilbar Jani Chali Hawa Mastani” as it played on Ma’s radio, and wouldn’t you know, I actually loved it. My whole life, that radio has alternatively been the source of my entertainment and cause of my despair, but it’s never stopped singing.

I never thought I’d learn a lesson in self-acceptance from an old appliance, but here we are. My mother’s formerly annoying radio ended up teaching me to find my own frequency.