Free beer, doughnuts and a $1 million lottery – how the US is planning to reach herd immunity

While Indians struggle to get a jab, over in the US, the maker of Bud Light says it will give all Americans over 21 a free beer if the country’s 70% vaccination goal is attained. 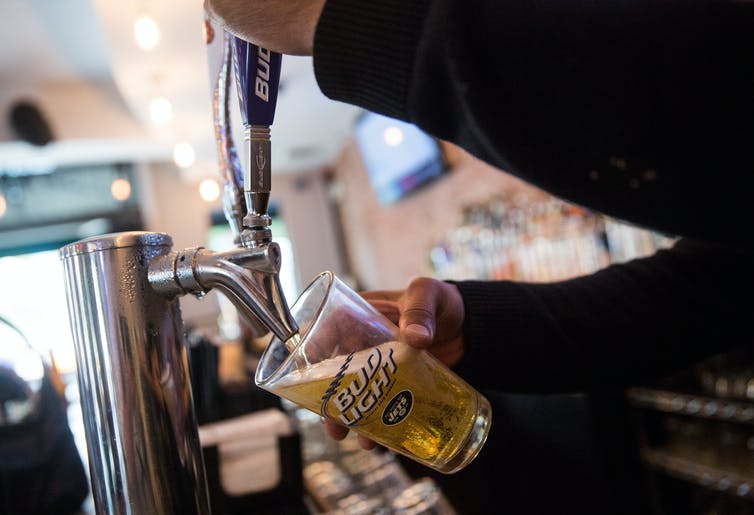 A growing number of states, cities and companies are offering incentives to encourage people to get vaccinated. And the sweeteners keep getting bigger and better.

New Jersey, for example, is picking up the tab for a free beer for those who can prove they got a shot. Maryland is offering state employees US$100, while Lancaster, California, is trying to encourage teens to get inoculated by entering their names in a raffle for college scholarships worth up to $10,000. Not to be outdone, Ohio said it is creating a lottery with prizes of up to a full four-year scholarship for newly vaccinated teens and $1 million for adults; several winners have already been announced.

Meanwhile, companies are offering everything from paid time off and gift cards to doughnuts and a burger and french fries. And on June 2, Anheuser-Busch InBev promised all Americans age 21 and up a free beer if the U.S. reaches President Joe Biden’s goal of giving 70% of adults one shot by July 4.

Of course the big question is, will any of this work? Early reports suggest at least some of the incentives are in fact helping, particularly among younger people.

The stakes couldn’t be higher. Health officials say herd immunity is critical to ending the pandemic, and that means having anywhere from 60% to 90% of a given population vaccinated, including children. But recent surveys suggest more than one-third of adults are at least reluctant to get the vaccine.

While behavioral economists generally study people’s decisions and the effect of incentives on behavior, my research at the Los Angeles Behavioral Economics Laboratory focuses more closely on why they make those decisions. I believe incentives can work, but there are two other important tools in policymakers’ behavioral toolkits as well.

How we make decisions

Decision-making is guided by whether people perceive an option as rewarding or displeasing.

We evaluate decisions based on how we encode and recollect our own personal experiences, how costly we feel it is to choose one path or another and how we process the information around us. In addition, the different communities we live in may reinforce certain messages over others – as evidenced by the uneven vaccination rates across the country.

The intention to get vaccinated may be influenced by factors including education level, religious beliefs or political affiliation.

Some of the reasons people give for not wanting to get vaccinated can probably be addressed, while others may be insurmountable. But to induce people to make decisions that they are reluctant to make, one needs to shift their motivations.

Economic incentives are one way to do that.

These incentives target people who think that they do not need a COVID-19 vaccine, who usually do not get vaccinated for nonideological reasons, or those who find it inconvenient.

Recent surveys suggest such tactics could be successful. One recent poll found that 47% of people who want to “wait and see” about the vaccines said getting paid time off from work to get a shot would make them more likely to do so. And 39% said a financial incentive of $200 would do the trick.

A problem with states offering cash payments or lottery winnings is that people may interpret them as a signal that the vaccine is dangerous, perhaps reinforcing their own beliefs. Research also suggests that perks may be more effective than cash and may be a good alternative for both states and companies.

News you can use

But incentives aren’t the only way governments can get people to change their minds.

Information campaigns are an attractive alternative. They aim to shift beliefs and opinions by providing knowledge and awareness about some elements of the decision a person may have missed. This includes disclosing the results of clinical trials or explaining how mRNA vaccines work on the 12-to-15-year-olds who are now eligible.

People who fear that clinical trials have been rushed and are still hesitant might respond favorably to information campaigns demonstrating the effects of the vaccines on the U.S. population and elsewhere. These campaigns could also be combined with incentives, such as inviting people to watch informational videos and then rewarding them with credits that they can use at local stores.

This type of motivational push is least likely to work with those who do not trust sources of information that contradict their opinions or whose opposition to the vaccine is ideological.

If incentives and offering information don’t work, another option is the nudge, a term popularized by behavioral economist Richard Thaler and legal scholar Cass Sunstein.

Nudges use positive reinforcement or indirect suggestions to influence behavior, such as by taking advantage of peer pressure or by making a certain choice easier for people to adopt. Research shows they can be very effective. For example, requiring people to opt out of a company 401(k) plan rather than opt in led to a substantial increase in the number of people saving for retirement.

Many people are already nudging friends and colleagues in their social networks to get vaccinated by posting pictures of themselves on Twitter and Facebook getting a shot, celebrating or holding their vaccination cards. Policymakers could similarly promote vaccination by demonstrating that others in the same community already got a shot.

Governments could also make it easier to get a shot by doing things like adding vaccine sites at subway stations.

Nudges are appealing because they do not cost as much as economic incentives. They also can help change habits, and they sometimes have persistent effects. However, nudges work best if people agree with the end outcome.

There is little chance incentives will persuade people who have set their minds against the vaccine or whose objections are based on conspiracy theories. Because it is in their interest to promote these views, or because they are convinced that they are right, they will resist economic incentives, disregard information campaigns and refuse to be nudged in a direction opposite to their beliefs.

However, there seems to be hope to persuade many of the hesitant or reluctant. A recent survey of people in these categories revealed that about 20% of respondents would get vaccinated after people they know did.

The Centers for Disease Control and Prevention recently offered another type of motivation when it said that vaccinated people could go mask-free in most settings, including indoors. Another recent poll suggested this may be effective with Republicans, who were significantly more likely to be willing to get a shot if it meant they no longer had to wear a mask.

I believe a combination of incentives and other motivations stands a good chance of helping the U.S. reach herd immunity and ultimately end the pandemic.

This article was updated on June 4, 2021, to add details about Anheuser-Busch InBev’s beer giveaway and a report on the effectiveness of incentives.