On Tuesday, Delhi Chief Minister Arvind Kejriwal called off his strike held at the Lieutenant Governor’s residence. Kejriwal’s strike was ended against the alleged strike of IAS officers in Delhi. 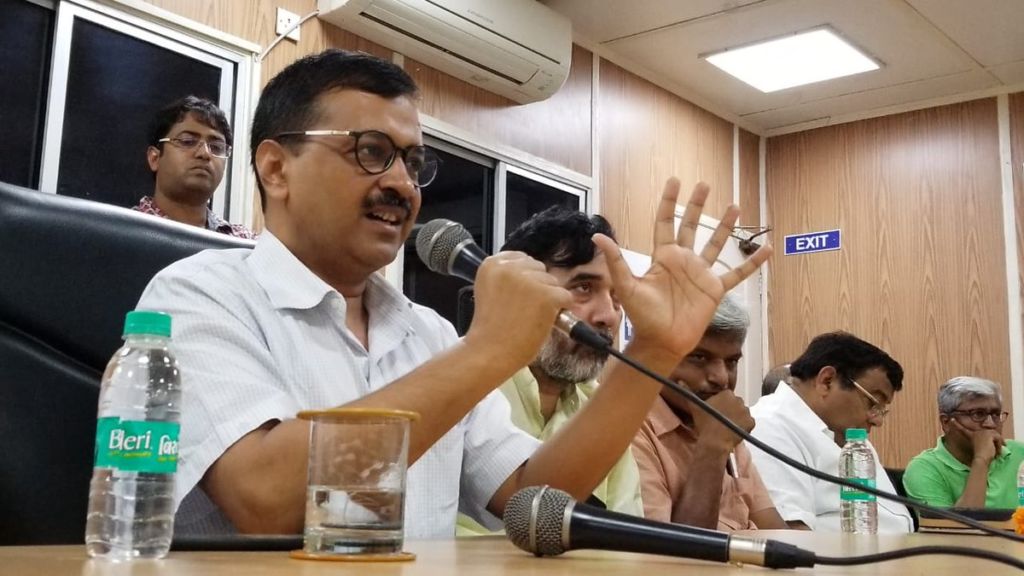 Delhi's Chief Minister Arvind Kejriwal has been involved in an impasse with the capital's IAS officers. Credit: Twitter/@ashu3page

On Tuesday, Delhi Chief Minister Arvind Kejriwal called off his strike held at the Lieutenant Governor’s residence. Kejriwal’s strike was against the alleged strike of IAS officers in Delhi. Since last Monday, Delhi’s Chief Minister along with Deputy CM Manish Sisodia, Health Minister Satyendar Jain and Labour Minister Gopal Rai held a sit-in protest on June 11 at Raj Niwas, which is the residence of Delhi’s Lieutenant Governor Anil Baijal.

The strike headed by Kejriwal ended two days after the Delhi High Court criticised him for his continuous strike at Baijal’s home. The court questioned Kejriwal as to who authorised him to hold a protest at the Lieutenant Governor’s residence.

After the chief minister called off the strike, Baijal urged him to “urgently meet” IAS officers at the Delhi Secretariat. Baijal wrote a letter to Kejriwal in response to Sisodia’s message, wherein the latter had asked for a meeting between government officials and bureaucrats.

An official from Baijal’s office said, “The L-G requested the CM to urgently meet the officers at the Secretariat so that apprehensions and concerns of both sides can be suitably addressed through dialogue in the best interest of the people of Delhi.” The official mentioned that Baijal had earlier advised the AAP (Aam Aadmi Party) government to take concrete steps in restoring trust between the government and the officers, as reported by Deccan Chronicle.

Kejriwal blamed Prime Minister Narendra Modi of orchestrating the IAS officers’ strike in Delhi. He added that the strike is being coordinated by Baijal to render Delhi’s government handicapped. The chief minister requested Modi to ask the officers to end the alleged strike and return to work. He promised to fight for the people of Delhi and said that he will “not sit silently whenever they are denied their rights”.

Kejriwal said, “IAS officers are on strike since February. Yes, they come to office, clear files and go back. Officers are not attending meetings with ministers. They don’t join us during field inspections. When we call them, they don’t answer our calls, when we send them a text message, they don’t reply to us,” as reported by Financial Express.

The Delhi CM received immense support from politicians and academics in the capital. Kejriwal also wrote a letter to Modi. In his letter, Kejriwal wrote that several IAS officers have been on strike in Delhi since the last three months; he wrote that they have not been attending meetings. Because of this, work has been impacted.

Kejriwal’s strike at Baijal’s residence was severely criticised by the Delhi high court. The high court said, “This can’t be called a strike. You can’t go inside someone’s office or house and hold a strike there,” according to NDTV. The news channel further reported that Kejriwal would continue his strike until Baijal asks bureaucrats to change their approach and return to work.

What the IAS Association said

Delhi’s IAS association has clarified that their officers are not on strike; the association instead says that they are being “targeted” and “victimised.”

Manisha Saxena from the IAS Association Delhi, told news agency ANI: “I would like to inform that we are not on strike. The information that IAS officers in Delhi are on strike is completely false and baseless. We are attending meetings, all departments are doing their work. We are sometimes also working on holidays.”

Saxena added that the government officials skip meetings wherein they feel their “self-respect” will be at risk. She said, “Routine meetings and statutory meetings are different, we attend the latter. We have no confidence, no one has reached out to us to boost our confidence”.

The IAS officers vehemently denied all AAP’s claims that they were conforming to the Centre and the Lieutenant Governor. Saxena said, “We are not working on anyone’s behest, please communicate this. Camera recordings cannot show our mental anguish,” NDTV reported.