Mallikarjun Kharge, the favorite, has been elected president of the Congress party. 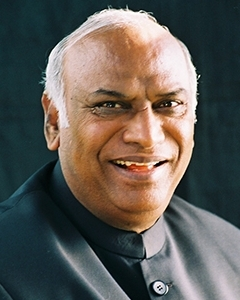 ‘My best wishes to Shri Mallikarjun Kharge Ji for his new responsibility as President of @INCIndia. May he have a fruitful tenure ahead. @kharge,’ PM Modi tweeted.

Mr. Tharoor congratulated Mr. Kharge and thanked the delegates who supported him.

‘It is a great honour and a huge responsibility to be President of the Indian National Congress and I wish Mallikarjun Kharge all success in that task. It was a privilege to have received the support of over a thousand colleagues, and to carry the hopes and aspirations of so many well-wishers of Congress across India,’ Mr. Tharoor said.

Congress interim chief Sonia Gandhi on Monday spoke to media before casting her vote for the party’s presidential election and said, ‘I have been waiting for a long time for this’

The election marks an historic day for India’s oldest political party, as a non-Gandhi chief will be elected after more than 24 years.

While Mr. Kharge has all but been considered as the Gandhi family’s ‘official candidate’ with a large number, Mr. Tharoor is positioning himself as the catalyst for change.

Mr. Kharge, a staunch loyalist, said the party cannot work without the guidance and advice of the Gandhis. The priority is for organizational reforms announced at the Chintan Shivir in Udaipur, according to him, were he elected.

Mr. Tharoor has been alleging in the run-up to the counting that the contest was not a level-playing field in accessing the delegates. Several PCC chiefs and senior leaders were allegedly not available for a meeting with Mr. Tharoor during his visits to their respective states.

Mr. Kharge was on the contrary shown a lot of their support when he visited them.

Voting for the presidential elections ended at 4 pm on Wednesday.

The fate of the Congress party was decided by over 9,000 Pradesh Congress Committee (PCC) delegates who comprise the electoral college for electing the party chief, as 96 per cent turned out to vote.

In its nearly 137-year-old history, this is only the sixth time that an electoral contest decided who the next Congress president would be.

Addressing his first press conference, the president-elect on Wednesday said, ‘we need to fight against a conspiracy to kill democracy.’

Mr. Kharge said no one in the party is big or small and he will work as a true Congress soldier to strengthen the organisation. He added that for him every Congress worker is equal and all have to work together to fight the fascists forces threatening democracy and the Constitution.

‘No one is big or small and all have to work together as karyakartas to strengthen the Congress,’ he said.