Snake charmers consider themselves close to Lord Shiva; so, if they give up their occupation, it will affect their religion to a great extent, say experts 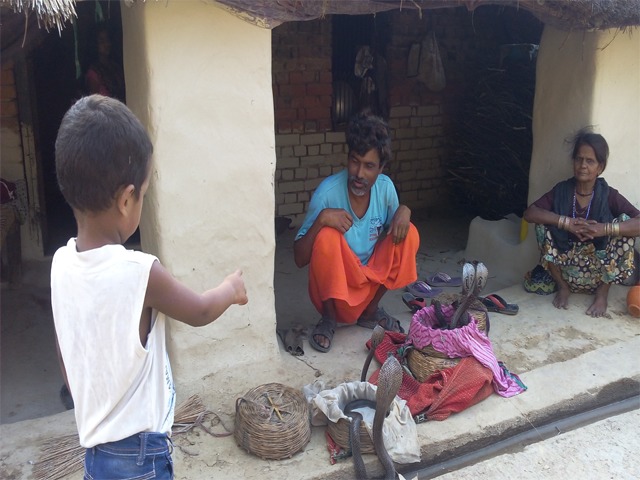 Snake charmer Aandhi Nath shows off his cobras outside his hut in Jogi Dera on the outskirts of Kanpur. Credit: Rohit Ghosh

Squatting in front of his mud hut, Aandhi Nath unties the cords holding the lids of two wicker baskets tightly in place. As he slowly removes the lids and pokes a finger inside, out pop the heads of four black cobras. “Each basket has a pair of male and female cobras,” he says, lightly patting their heads with the back of his hand.

They spread their hoods and hiss, which is the only sound breaking the silence in Jogi Dera, a village on the outskirts of Kanpur, that languid afternoon.

“They are agitated because of the heat, and they are yet to eat,” says Nath, replacing and securing the lids, as the cobras coil back inside. He now expects money from me for the ‘snake showing’.

Charming their way through

It was by chance that I caught Nath at his home. A temple nearby was offering a free lunch that day, so he stayed put. Or he would have been off, going from neighbourhood to neighbourhood on foot with his wicker baskets and cobras, playing the charmer’s flute.

“We have been catching snakes and displaying them in public for ages. I think my grandfather or great grandfather had settled in Jogi Dera two-odd centuries ago,” he says.

Snake charmers claim they belong to a sect founded centuries ago by a monk, Guru Gorakh Nath. The village in eastern India where Gorakh Nath lived gradually developed into a town and later into a city, Gorakhpur. Snake charmers were earlier concentrated in Gorakhpur, but as time passed, they spread and settled in different places, Jogi Dera being one of them.

Dr T B Singh, who teaches social science in Kanpur University, says, “You will find snakes in every village of India, and 70% of India lives in villages. Because snakes are abundant, snake charmers are flourishing.”

Monsoons are when Nath and his ilk are most in demand, because rainwater floods the reptiles’ holes, forcing them out in the open.

“There are times at the peak of the rainy season when we do not sleep even a wink. We have to keep rushing from one house to another to catch snakes. Sometimes, people even send cars to fetch us,” says Nath, claiming that they release the captured ones in the wild.

Going by his four handsome cobras though, one can presume that Nath is just playing safe, keeping in mind the law that prohibits catching, keeping or exhibiting snakes.

In fact, every household in Jogi Dera has a few poisonous snakes and other reptiles, complete with wicker baskets.

A snake charmer in India stands out because of his appearance—a turban, kurta, and dhoti with a beard and long hair. He balances a bamboo pole on his shoulder; at one end hang the wicker baskets, and at the other, a bag of foodgrains or any other offering.

“It was in the 19th century that the British writers and travellers visiting India started mentioning the country as the land of snake charmers,” says Dr M N P Tiwari, who teaches history at Banaras Hindu University.

“That was a deliberate move, because the British wanted to rule over India. A snake charmer looks primitive, and they wanted to project a backward image of India.

“In Hindu mythology, snakes are highly venerated; Lord Shiva has a cobra around his neck, Lord Vishnu is shown reclining on a coiled serpent, and Lord Ganesha ties a snake around his waist. Because snakes have been depicted so close to gods, Hindus see them as gods too and worship them.”

That’s why Hindus celebrate Naag Panchmi, a festival dedicated to cobras. On the day of the festival, a snake charmer announces his arrival in a neighbourhood by playing his flute. He is then reverentially welcomed into homes, where he displays his snakes. In return, he gets a cup of milk for the reptiles and some money and maybe a bowl of flour or rice for himself.

Dr Tiwari adds, “In Hinduism, snakes symbolise knowledge. In fact, there’s a neighbourhood Sarp Kuan [literally, snake well] in Varanasi. The city has been a seat of learning for Hindus for ages. Every year at Naag Panchami, debates are organised at Sarp Kuan; these see participation of great scholars. No one knows for sure when the debates were started, but they are held even now.”

Stuck in a time warp?

Just a few miles away from Jogi Dera is the Indian Institute of Technology, and not too far from Nath’s home is Panki, an industrial hub that produces everything from automobiles to biscuits to plastic cups and employs thousands, both a sign of advancement. Why then is Nath the same as his forefathers were?

“Because snake charmers don’t want to change. They have had a particular image for ages and can’t shed it so easily,” explains Dr Singh.

“Another reason is religion. Snake charmers consider themselves close to Lord Shiva; so, if they give up their occupation, it will affect their religion to a great extent.”

Nonetheless, snake charmers should join the mainstream, he says, because it’s the demand of the time. “If they don’t, they will remain backward forever.”

Changes are slowly taking place in Jogi Dera. Some youths have given up catching and charming snakes and taken up jobs, even shifting to other parts of the country.

But Chumbak Nath, an elderly snake charmer from Jogi Dera, wants the government to recognise his tribe as Dalits and give snake charmers a fixed quota in universities and government jobs.

Dr Singh says, “Snake charmers will change, gradually. But till then, the two Indias—old and new—can co-exist.”

Rohit Ghosh is an independent journalist based in Kanpur.