Why Brexit needs to be put to a second vote

Almost two years after the UK voted to quit the EU, an all but leaderless Britain is fumbling its way to disaster. 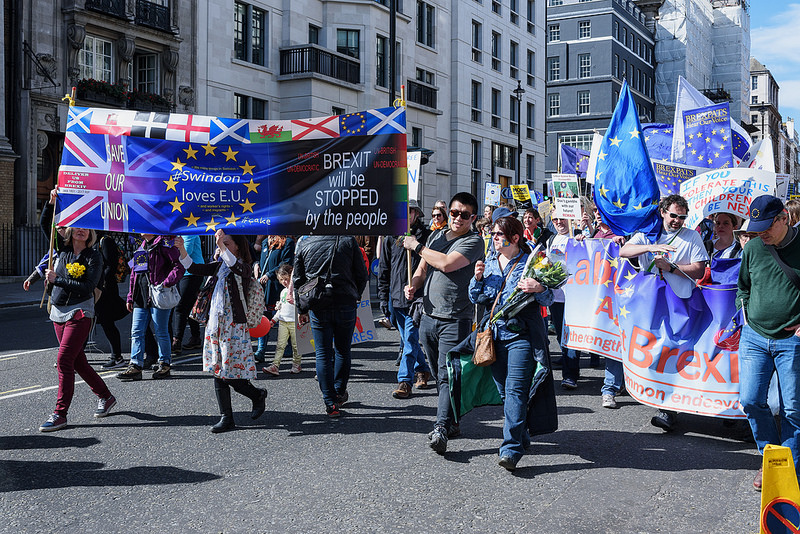 Almost two years after the U.K. voted to quit the European Union, and barely more than a year before the actual exit is scheduled to happen, an all but leaderless Britain is fumbling its way to disaster. The country needs to find a way to change course. There should be a second referendum as soon as possible.

It was a huge error to call the first referendum, not least because the choice put before the country was so unclear. Nobody bothered to say what Brexit would actually mean. Acting on a mixture of no information and outright misinformation, a narrow majority of voters nonetheless chose to leave the EU. Nullifying that choice, misguided as it was, requires another popular vote — this time, informed by what’s been learned.

After two years of thinking about it, Prime Minister Theresa May’s government is still split over what it wants — and an upcoming series of speeches intended to lay out its vision is unlikely to help. Negotiating a tolerably successful Brexit might have been impossible in any case, but the protracted failure to set goals and develop a strategy for advancing them is making the worst possible Brexit ever more likely.

If Britain leaves the EU in March 2019 without even any transitional arrangements, its trade in goods and services — not just with the EU but with much of the rest of the world — will collapse into chaos. Disentangling the U.K. from its partnership with Europe is proving to be vastly more complex and difficult than Brexit supporters believed. And as the enormous short-term costs of an abrupt divorce come more clearly into view, the long-term goals that were supposed to justify them are ever more obscure.

Consider one small but especially sensitive part of the overall negotiation: the Irish dilemma. May has promised not to impose a hard border between Ireland, which will remain in the EU, and Northern Ireland, which is part of the U.K. What she hasn’t said is how such a border, which could unsettle the peace the island has enjoyed for two decades, can be avoided. Last week, Foreign Minister Boris Johnson gave the first of those speeches intended to clarify Britain’s position on life after Brexit — and failed to so much as mention Northern Ireland.

To be sure, it’s unlikely that May could reverse herself, propose a second referendum, and survive as leader of the Conservative Party. With so much at stake, she should recognize that this is a minor consideration. The Labour opposition, itself divided over Brexit, has also said the first vote must stand. That position also has to change. Remember, Remain supporters in both parties constitute a comfortable majority in parliament — even as they insist that the previous referendum must be honored. On this surpassingly important issue, they need to come together across party lines and press for another vote.

Can it be taken for granted that a second referendum would in fact reverse the country’s choice? Of course not. Opinion is wobbling but hasn’t shifted decisively: The country remains split down the middle. But this is less surprising when you recall that so few of the country’s politicians are calling on Britain to reconsider. Again, they should do their jobs — and stand up for what they believe to be their voters’ best interests.

One more thing might be needed to make the difference: the involvement of the European Union. Up to now, it has emphasized the difficulties Britain is bringing upon itself and made it clear that Europe isn’t going to help Brexit sting less. That’s fine — but it ought now to join the debate in a more positive way, calling on Britain to change its mind. It should say, among other things, that if Britain acts promptly, the EU would make reversing the Brexit decision as straightforward as possible.

Extracting Britain from this mess of its own making won’t be easy. A second referendum would certainly arouse furious protests, and quite possibly a political crisis, new elections, and all the dangers and uncertainties that go with that. Yet the alternative — the chaotic Brexit toward which a rudderless Britain is now heading — would be worse.