Breaking free like Freddie: you can never take the baug out of a bawa

Freddie’s life certainly contained majja… just at the scale of a rockstar. 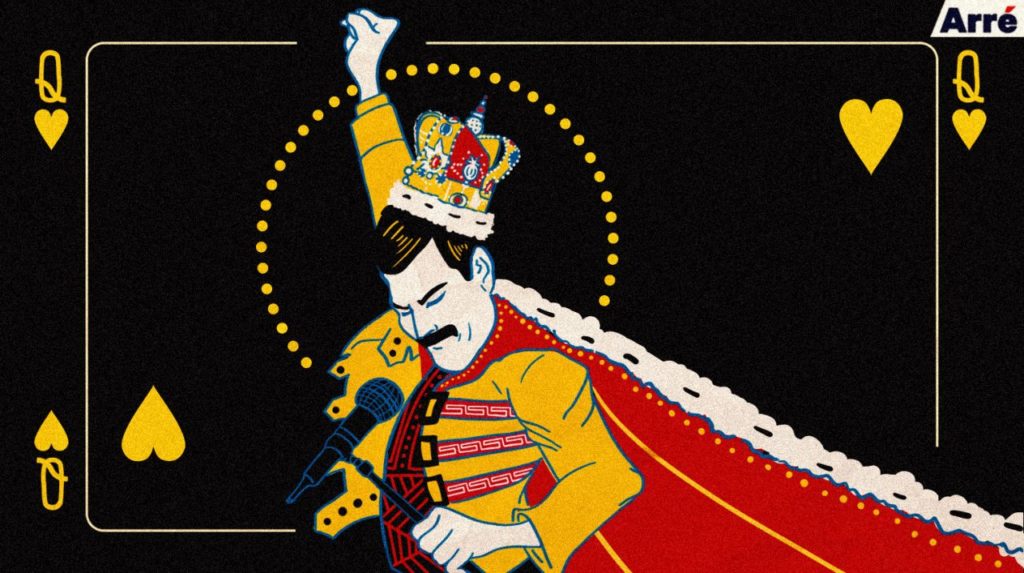 Being Parsi is what Freddie Mercury did best. His entire existence is the embodiment of the quintessential Parsi doctrine of “khavanu, pivanu, majja ni life!”

The recently released teaser for Bohemian Rhapsody starring Rami Malek is breaking the internet for all the right reasons. It shoves a hot, heavy, heaping dose of ’70s’ nostalgia down our throats, backed by a mashup of some of the best of Queen, and features a charmingly buck-toothed Freddie Mercury: The man whose music has served as a backing track for everything from drunken nights out to long drives.

And then there is the promise of peeking into the crazy life of legendary excess led by the former Farrokh Bulsara.

“Excess is a part of my nature,” Mercury once said. That an odd-looking, queer, Parsi immigrant kid went on to become one of the titans of the burgeoning British rock scene is testament to how far this “nature” got him.

As the frontman of Queen, he witnessed the heyday of rockstar hedonism in the ’70s. “To me, dullness is a disease. I need danger and excitement. Straight people bore me stiff. I love freaky people.” Which is why his parties were rumoured to feature topless waitresses holding magnums of champagne, midgets with trays of cocaine strapped to their heads, and aquarium-sized fish tanks filled with nude models painted to look like rocks and reptiles, lying on top of each other. Queen legend speaks of a five-day bender featuring 30,000 pounds of vintage champagne and birthday cakes the size of baby pianos.

The gigs that led to these parties were no less striking – with Freddie wearing everything from spandex, animal-print leotards, and feather boas, performing atop actors dressed like Darth Vader or Superman. Mercury would pout, strut, and gyrate like a manic ball of coked-up energy. When he was on stage, it was like experiencing an audio-visual orgasm. Your eyeballs had no choice but to freeze front-and-centre, while your ears took in the ethereal angelic crooning that could delve into a throathy baritone at the drop of a hat.

Some Mercury fans put these manic eccentricities down to a desire to transform himself into a mythical figure, distanced as much as possible from his ethnicity. Being Parsi in the English rock scene of the ’70s was like being Michael Jackson at a KKK rally; you’d probably get burned even though you looked white. With his uniquely Parsi features like the trademark hooked nose, prominent “bakra na kaan”, and strong jawline, the question of his ethnicity always hovered in the background.

Freddie’s life certainly contained majja… just at the scale of a rockstar.

But despite his own misgivings, being Parsi is what Freddie did best.

Parsis, if my unscientific analysis premised on having grown up in Mumbai is any indication, live life to the absolute fullest. For example, our dear family friend Aunty Freni. She’s pushing 70, has not one but two titanium hips, and a cataract to boot. She strolls through the sylvan gardens in the baug where she lives, ogling anything with a penis, including doodhwalas, delivery boys, Uber drivers, and the occasional Parsi dikra. Despite causing her daughter much embarrassment, Freni has made it her life’s mission to “try till she dies”, as she succinctly puts it. It’s a typically Parsi way of summing up a typically Parsi attitude.

If you have the opportunity, visit any Parsi baug. You’ll witness some of its oldest, borderline decrepit inhabitants walking around with a spark in their eyes and a smile on their lips. They might come across as private, reserved, and solemn, but scratch the surface and the most serious-looking uncle in a sudra sitting in his rocking chair will pour you a Scotch, put on some rock’n’roll on his immaculately maintained record player, and affectionately call you “banechod” within the first 10 minutes.

This philosophy is unique to the Parsis. Their joie de vivre isn’t only for occasions like weddings and navjotes, where the bhonu will be the end of you, but for everyday life in general. This gusto stems from an ingrained, almost genetic need to make the most of everyday and have fun along the way.

There is no middle ground, no holding back, and no stopping after the first helping; you go back for more and don’t stop till you’re about to burst, just like Freddie on stage.

“There’s no half measures with me,” said the man with the three-octave baritone, embodying the quintessential Parsi doctrine of “khavanu, pivanu, majja ni life!” Except, on a grander stage. Freddie’s life certainly contained majja… just at the scale of a rockstar. He might have been loath to admit it, but you can take a Bawa out of the baug, but there’s no taking the baug out of the Bawa.