Are spiders the most ‘stylish’ of the arthropods??

Punk hairstyles and pirouettes: why there’s more to spiders than people think 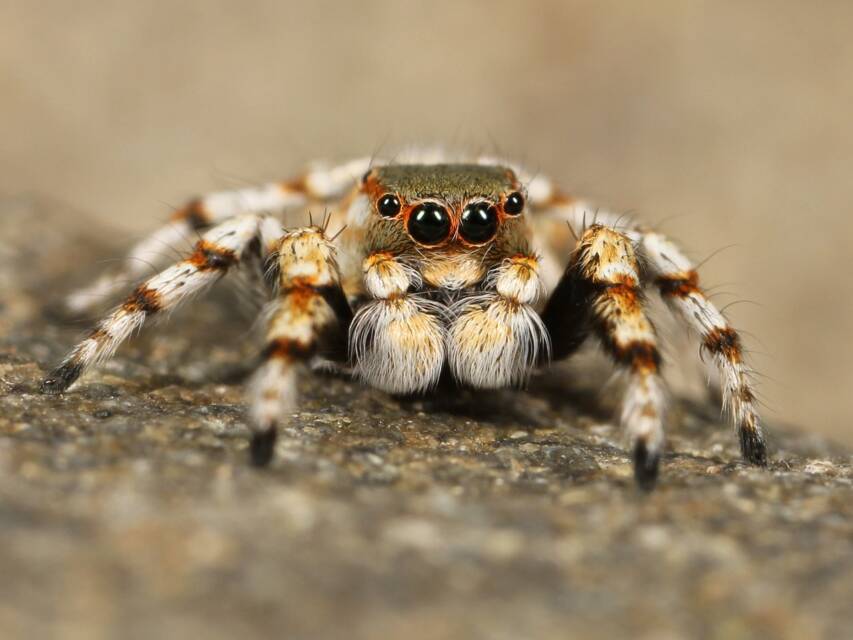 Spider scientists are an optimistic crowd. Perhaps it’s just that we see things from a different angle to arachnophobes. If you don’t believe me, look up Theridion grallator. Researchers from my field call this Hawaiian species the happy-face spider because of the smile-like curves on its back.

Spiders have a reputation for inspiring fear. But working with them puts me in a good mood, given how much scientists have learned from their study.

Spider research has given us insights into evolution, such as why there is so much diversity within a single species. For example, why do happy face spiders, or their colourful European counterparts, the candy-striped spider, come in so many different colours? Under some conditions one candy-stripe colour is more beneficial to spiders, but in other conditions the colour doesn’t seem to matter. For example, deeper-coloured spiders warm up more readily in the sunshine. Also, predators detect some colours more easily than others.

Fellow spiders from other parts of this 400 million-year-old family tree have provided blueprints for useful materials such as silk. Synthetic silks inspired by spiders have medical uses. They can be chemically decorated with antibiotics, designed to detach from the silk only when bacteria are active. In the future, antibiotic silk could be used for wound healing. Other useful substances that can be bolted on to the silk include proteins that direct human cells to grow, a bit like molecular traffic lights, directing cell growth and guiding repair.

Spiders are also natural pest controllers because of the imaginative techniques they use to catch their prey. Some of them ensnare their prey using webs, others lie in wait or stalk their targets. Some are active during the day while others do the night shift.

Small spiders spin a silken line that acts as a sail to catch the wind and fly, so they can quickly travel to pest hot spots. These strategies help them control populations of unwelcome visitors to our homes such as houseflies, which can carry disease.

Only a small number of spiders on the planet have venom that hurts humans. Brazilian wandering spiders and Australian black widows, commonly known as redbacks, are two examples, but the scale of the threat they pose is far smaller than people expect. In Australia between 2000 and 2013, hornets and other stinging species were reportedly responsible for 27 human deaths, while 74 people died in incidents involving horses. Yet the figure for scorpions and spiders was zero.

Miscommunication fuels the anxiety we feel about spiders, particularly the ones that live in urban environments – places like under the sofa and above the bathroom cabinet. News articles that play on arachnophobes’ worst fears may appear highly researched. But they are sometimes littered with mistakes and may even be accompanied by pictures of the wrong animal, such as the harmless harvestman – which isn’t even a spider.

One of the creatures commonly found in our homes is the spindly-legged daddy long legs spider, Pholcus phalangioides, which eats house flies and can’t hurt humans. It just needs a warm environment and a few insects to catch, which it wraps firmly in silk for eating later.

Our homes are safe spaces for Pholcus as they are largely free from predators and chemical threats such as insecticides. We often notice this spider when it matures in the autumn. Once the mother spider has produced her eggsac, she holds on to it tightly until her spiderlings are ready to occupy the web beside her.

While Pholcus may not be as colourful as happy face or candy-striped spiders, the species more than makes up for this in personality. There are brave and shy Pholcus that differ in their tendency to pirouette around in their webs (a behaviour known as whirling). Scientists don’t fully understand whirling but it’s probably a defence against predators such as jumping spiders, which rely on their excellent eyesight to hunt. Jumping spiders struggle to attack these dancing targets.

Our bathroom daddy long legs is a relative of another species of Pholcus first identified in caves in Manila, capital of the Philippines, in the late 1890s by naturalist Eugène Simon. It’s called Pholcus bicornutus and has what were originally thought to be horns on its head.

In fact, studies in 2016 showed they are not horns but waxed hairs, which the spider crafts into points that would not look out of place in an exhibition of 1970s punk fashion. It is not clear what the purpose of this unusual hairstyling is, but it shows how much there is left to discover about spiders.

Many of us have lifestyles disconnected from nature, buying food without going near a farm and spending much of our time glued to screens. So it’s no wonder people react with alarm when a tiny form of wildlife manages to wiggle into their homes. But spiders’ presence are a reminder of the amazing pest control services they provide us for free.

Next time you spot a spider’s web on your windowsill, take a moment to marvel over the intricate, delicate construction that might inspire future treatments to repair our own bodies. If you find yourself playing host to a dancing Pholcus, leave it to pirouette in peace.