Young ‘uns to the rescue: How youth are taking over the climate movement around the world

Action, to them, doesn’t merely include protests or speaking at international forums or trying to rally pockets of the youth in different parts of the world . 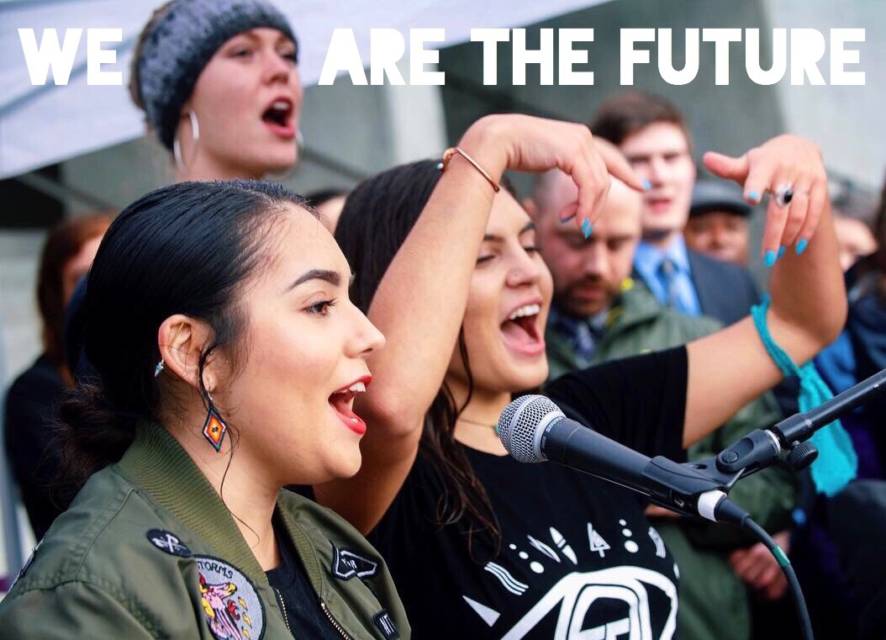 Mia Eastman, a youth climate activist and leader with Earth Guardians, at a rally. Credits to source.

Editor’s note: On March 15, 2019, over one million students from around the world, skipped school as an act of protest against government inaction and apathy towards dealing with climate change. More than 2,000 protests were organised in 125 countries, and this movement was inspired by teen eco-warrior Greta Thunberg’s crusade, for which she has now been nominated by three Norwegian MPs for the Nobel Peace Prize.

This is the second part of a two-part piece that touches upon climate policy and how the global youth are pushing for innovative policy approaches. Read part one, an explainer on the Green New Deal.

Activism on the environmental front has slowly transformed to include the new generation and new media tools for the big fight.

Fighting for climate action is a long, arduous journey into politics, policy, and compromising on policy matters to achieve any progress, even if it is on paper only. For instance, the Green New Deal, which was released in the USA in December 2018, and was debated in the Parliament point by point, before being redrafted by the Democratic Party to reflect as less extreme. The initial proposal was merely to set up a committee to investigate and draft a new economic plan to sustain a green development outcome for the future of the US.

Politicians and policymakers of today have a long fight ahead, and the youth aren’t satisfied being by-standers. They realise that current political trends and ideological lines are bound to ensure that their futures are compromised and shortchanged in the worst ways possible. This is making them come together and organise themselves using tools that are idiosyncratic to their generation.

Youth activists for climate change have been around for some time. However, of late, they have began making headlines with aggressive stances, as they lobby for their future. Climate change is not a headline-worthy cause just yet, although it affects tens of millions of lives directly or indirectly every year. And this is just human lives we’re counting.

The Green New Deal was catalysed by The Sunrise Movement, who lobbied and protested to get their plan heard. Their efforts to get sponsors for the modified Green New Deal seems like a national album tour, with thousands of local, mostly millennial, supporters fighting to get a message through to their political leaders—that the people care, and the youth has no choice but to care because their futures are at stake.

As put by 18-year-old Mia from Earth Guardians: “It isn’t that the planet needs saving, the human race does, from itself. We produce and consume with little regard for the effects that it has on our environment and ourselves. As time progresses it will only become increasingly more clear that our collective contribution to the health this planet has been more negative than positive.”

That the youth is pushed to be a moral compass for humans is unsettling, but also hopeful.

Beyond feel good sloganism is an entire worldwide movement led by teens and 20-somethings to restrict emissions & cap the greenhouse effect to 1.5 degrees by 2030.

Greta Thunberg, a 16-year-old Swedish activist is alarmed enough to act right now for a number of reasons such as the sixth mass extinction & climate justice. Walking out of class one day to protest the silence on climate change and emissions in Sweden, she created global headlines by demonstrating in from of the Swedish Parliament. Greta mostly communicates her vision online and her youth movement for school protests ( #FridaysForFuture ) grew to a world level rapidly.

Basel in Switzerland announced a state of climate emergency after a protest one Friday based on Greta’s vision. She has chosen to step beyond education, and fight the forces that continually push climate change under the carpet, explaining how learning facts and figures is redundant in a time when action is the only recourse, and that the tools to fight climate change are already available. She works by using her blunt speeches to tell it like it is, to stress on how children will take the fight forward. So far, her work is inspiring many and mobilising a world army.

Kehkashan Basu, a teenager from Canada is a global crusader making the case for children in climate change policymaking. Founder of Green Hope and youth ambassador for the World Future Council, her eloquence at international forums is notable and she sent me her opinions from Suriname, while speaking at the High Level Conference of High Forest cover, Low Deforestation (HFLD) countries in February. She has always seen the climate change fight as her calling in life and is now looking to building a world army as well as ace college, while attending other international conferences to get everyone to listen to the kids.

Her tool for amassing a world force is social media. She says, “social media is the most powerful tool available to surmount geographical and cultural barriers. I have used it extensively to build outreach for Green Hope . In the six years since, I established Green Hope with a handful of friends after returning from Rio+20 ( Earth Summit in Brazil), it has become a global movement with a presence in 12 countries and impacts in over 20 .Like every tool , one needs to use it with prudence and civility and within the laws of the land. I strongly feel , that the benefits far outweigh the cons” .

Like many of her age, she uses her voice & platform to raise issues larger than herself.

While Kehkashan doesn’t focus on making and reinventing public policy for climate change, she does believe that no Green New Deal is likely to succeed without the people backing them. “The movement has to be “bottom-up” . Legislation or deals between nations will not be effective unless civil society is in sync. The 2018 IPCC report is a case in point . It has clearly stated that global warming and climate change mitigation cannot be effective without the participation of every member of civil society”, she argues her case.

“It is today’s youth who risk inheriting a hot planet brought about the mindless apathy of current policy makers. Our generation, is therefore, the last one that has the opportunity of taking actions before it is too late”, she says, with a determination that many of her generation seem to share.

Others believe in affecting top-down policy change. Action, to them, doesn’t merely include protests or speaking at international forums or trying to rally pockets of the youth in different parts of the world either. A leader from Earth Guardians, Mia Eastman describes their efforts in the USA.

“As a youth leader myself, I know for a fact that my generations involvement in the environmental movement is both vital and effective. There’s a federal lawsuit in the United States currently called Juliana v. United States, but is commonly known as Youth v. Gov. In this case, 21 youth plaintiffs spanning our entire nation are suing the US government for depriving us of our constitutional rights to life, liberty and property considering they have ignored climate change for decades.” She calls the youth’s role in this movement “vital and effective”.

The Earth Guardians’ tool are followed by many “climate kids” around the world—these children are using judicial power to contest governmental policy most effectively and get eyes for their cause. They were an Organizational plaintiff in the groundbreaking JULIANA v. UNITED STATES (Youth Climate Lawsuit) awarded to 21 youth activists in 2018. Though highly contested, the Federal Court still upholds the verdict which included

“Exercising my ‘reasoned judgment,’ I have no doubt that the right to a climate system capable of sustaining human life is fundamental to a free and ordered society,” by U.S. District Judge Ann Aiken.

This tactic seems to be working as well. Dutch appeal court judges ruled against its Government in a case filed by the Greens(a Dutch ecological party) that the severity and scope of the climate crisis demanded greenhouse gas reductions of at least 25% by 2020 when measured against 1990 levels. The target itself seems infeasible, but is forcing the government into action and they have promised to deliver on this penalty.

Ruchi Jain, a 23-year-old ex- marketer in Mumbai, left her job to become a full-time climate activist in India. Working  with the Indian Youth Climate Network and 350.org, and she traveled to Copenhagen in December 2009 to participate in the climate talks.

Indian Youth Climate Network is working on ground level initiatives to improve accessibility to energy while trying to factor in the green goals for a country like India which faces severe ecological degradation to sustain a burgeoning population.

In 2017, 9-year-old climate activist Ridhima Pandey filed a case against the Indian government on failing to take sufficient action on meeting their climate change goals. The country faced devastating floods in Uttarakhand in 2013, caused out of rainstorms owing to climate change changing weather patterns. Ridhima and other youth activists are taking a step to making the country’s legislation stronger and these policies enforced better.

Kehkashan Basu opines on why many youth voices aren’t taken as seriously, especially in India “ Youth engagement is absolutely critical in defining climate change policy but we continue to be ignored especially in developing and third world countries.  Youth voices are much stronger and effective in developed nations for two reasons—greater access to education and greater representation/ inclusivity . The same needs to happen in developing nations , especially with regard to climate change policy.”

According to Mia of Earth Guardians, “Young people have the power to completely shift our society from the course we are on now. I personally believe that recognizing that power is one of the first tasks we must do as a generation to truly create change. ” She also urges Indians to organize and collectivize for the Earth Guardians across the globe.

While American groups argue and lobby for a Green New Deal, she believes it’s hardly a one-size-fits-all policy for a world stage. The hope, though, is that “ all nations laws reflect our respect for the environment”.

Suradha Iyer is a writing analyst at Qrius