Will Trump and Kim really ‘work towards’ denuclearisation: all you need to know about the Singapore summit 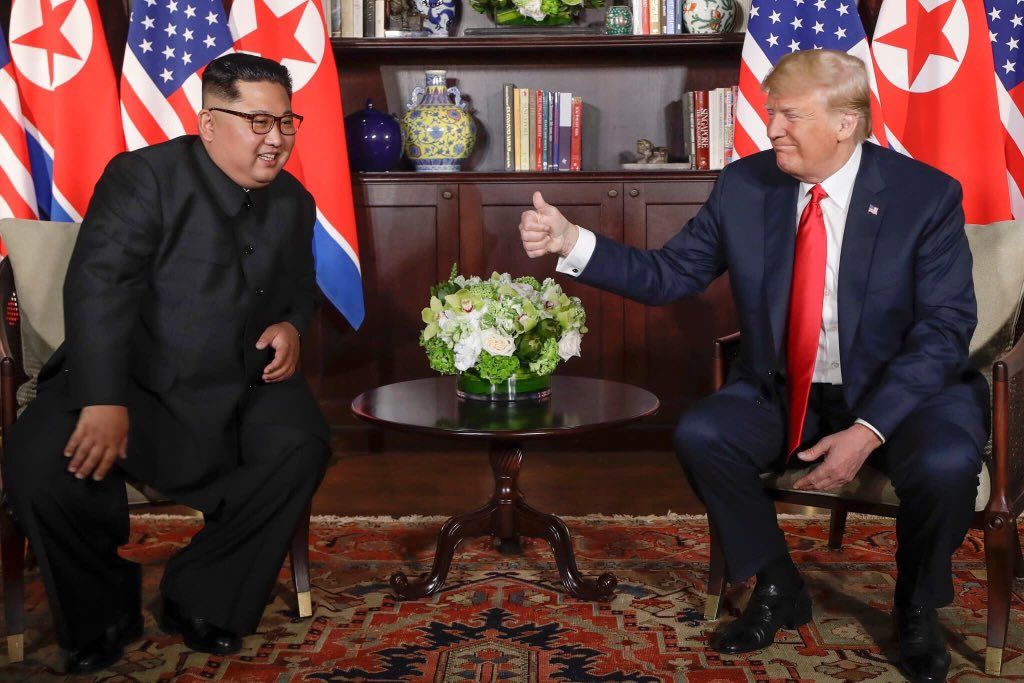 The first ever summit between US President Donald Trump and North Korean leader Kim Jong-un concluded on a positive note. Credit: Twitter/@SecPompeo

US President Donald Trump and North Korean leader Kim Jong-un ended their historic summit on a hugely positive note after Kim pledged towards denuclearization of the Korean peninsula, while Washington promised to provide security guarantees for the North.

The two leaders signed a joint statement towards the end of the summit held in Singapore. The statement mentioned, “President Trump committed to provide security guarantees to the DPRK and Chairman Kim Jong Un reaffirmed his firm and unwavering commitment to complete denuclearization of the Korean Peninsula.”

It further added that North Korean officials and US Secretary of State Mike Pompeo would be conducting follow-up negotiations “at the earliest possible date.” Trump was also optimistic about the denuclearization process and expected it to start “very, very quickly”.

The full text of the statement can be read here.

Photographs of the document signed by Trump and Kim indicate the leaders agreed to "work toward complete denuclearization of the Korean Peninsula" https://t.co/u4m8VitwED #TrumpKimSummit pic.twitter.com/tisysiTaS1

Although Trump and Kim signed an agreement to “work towards” complete denuclearization, the US president did not mention his previous aim of “complete, verifiable and irreversible denuclearization.” Moreover, Kim’s commitments were the same as given to South Korean President Moon Jae-in when they met in April.

However, Trump marked the talks as a historic and personal achievement. He added that he would “absolutely” offer an invitation to the White House to Kim.

What we know so far

Trump and Kim’s handshake lasted approximately for 12 seconds. The two leaders then held a one on one talk, which lasted for roughly 40 minutes and after this, the pair spoke about bilateral discussions. After having lunch with their aides, Trump mentioned that the talks had been “fantastic.” Kim said that both of the leaders had overcome many “obstacles” to make it to the summit. Speaking with the help of an interpreter, Kim said, “Many people in the world will think of this as a form of fantasy from a science fiction movie.”

Apart from pledging towards nuclear disarmament, the US and North Korea also agreed to recover the remains of prisoners of war from the North-South Korea conflict. Immediate repatriation will also be given to those prisoners who have been identified.

Key takeaways from the meeting

Robert Kelly, professor of political science at Pusan National University, seemed disappointed with the agreement signed by both leaders as it did not provide specifics of what the leaders aimed to do. Kelly said in an interview with The Guardian that the text was “even thinner than most sceptics anticipated”.

Prior to the summit, Trump’s statements made the meet look more like a simple introductory gathering rather than a place to discuss detailed policies and in fact, a CNN report argues that’s exactly what the summit was. The report claims that the American and North Korean diplomats might have agreed to some sort of a deal, or at least “a tangible takeaway,” and both leaders simply consented to this deal.

Furthermore, the report talks about how both Trump and Kim love political theatre and since global eyes were on the summit, the two leaders merely aimed to make it look good for the pictures.