What our obsession with over-celebrating weddings, birthdays, and now even divorces says about us

As December draws to a close, I’m certain most of us have been subjected to similar ungodly, and painfully boring, number of pre-wedding and save-the-date videos. 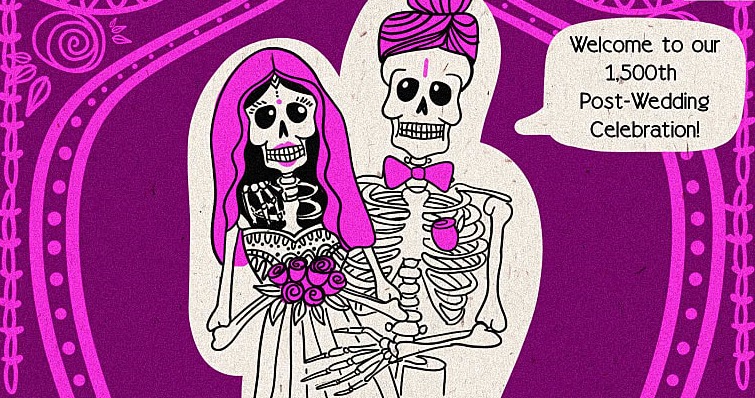 Last week, I had the misfortune of attending a wedding where the seven-minute-long monstrosity that was the pre-wedding video played three times. At each one of the five parties. On giant 12X12 feet screens stationed strategically across the venue. You could run, but there was nowhere to hide from the couple’s many walks into the sunset, pillow fights, and food fights while making what looked like Rachel’s beef trifle. By the 15th viewing, I was prepared to fake a pregnancy (I’m unmarried) just so I’d be forever banished from every future family celebration.

As December draws to a close, I’m certain most of us have been subjected to similar ungodly, and painfully boring, number of pre-wedding and save-the-date videos. In addition to being forced to smile at the vulgar display of wealth that these multiple reminders of a couple’s everlasting love are, one is expected to violently appreciate the minutest details — whether the bride’s lehenga is a Sabya or a Tahiliani knockoff, and if the groom has, at the very least, learned how to strum a few chords for that customary campfire shot.

Never mind that reality looked something like a variation of this: The bewildered girl stumbles her way into the living room, feeling a bit ridiculous about being decorated like a Christmas tree, balancing a tray loaded with cups of chai and samosas, while the boy’s mother gave her a piercing Mean Girls-like once-over, sizing her up to see if she had child-bearing hips or not.

But people don’t need to know that. Reality can be anything one wants it to be, provided one has the money to hire a wedding studio with a clever scriptwriter and an even better video editor. Aforementioned videos will then be shared on Instagram, Facebook, and Twitter, circulated on WhatsApp, be widely dissected on the various messenger groups that include anywhere between 100 to 1,000 of the couple’s “closest buddies”.

Today there is no escaping the multiple tawdry parties to celebrate a solitary life event for the sake of social media pageantry. Now, unless you’re winners of the genetic jackpot like Deepika Padukone and Ranveer Singh and want the world to very keenly feel its misery while sighing over your combined gorgeousness; or your wedding is practically paying for itself with all the endorsement deals your brilliant PR team managed to secure like Nickyanka; or you’re the Ambani and Piramal spawn, and at least one of your mothers is trying to use your award function-like spectacle of a wedding as a launchpad for an image makeover, there’s really no good reason to squeeze celebration out of marriage like a nimbu-pani waala squeezes every last drop of juice from a lemon rind. Because here’s the truth most people stuffing their faces with your ₹2,500-per-plate aren’t telling you: No. One. Cares.

No one really wants to see your second cousin’s precocious tween gyrating to a grossly inappropriate song at your sangeet. And no one is entertained by that weird uncle who gets far too drunk far too quickly at the cocktail party and insists on dancing with the bride’s bestie. And absolutely no one wants a drone hovering over their heads as they slip a little vodka into their orange juice to survive the ceremony.

Wretchedly, it’s not even just weddings anymore. Our gluttony for celebration, and an overinflated sense of self that insists that no milestone goes unacknowledged in as gaudy a way as money can buy, extends to “landmark” moments that until this craze for self-celebration took over us, were pretty standard rites of passage from one stage of life to another. Everything, from graduating college to showing the world that reproductive organs are functioning as expected, is an achievement in the world we currently inhabit.

Reality can be anything one wants it to be, provided one has the money to hire a wedding studio with a clever scriptwriter and an even better video editor.

Over the last couple of years, I’ve watched in amazement as heavily pregnant women orchestrate their “surprise” baby showers. From the exact shade of ivory in which she and the father of her child will be photographed in, to the makeup artist who will strobe her pregnancy glow to perfection, and even the tower of cupcakes against which a tasteful number of guests will pose for Instagram purposes, nothing is left to chance. The baby might be an accident, but nothing that follows, is.

I’ve also been part of kiddy birthday parties where mini-Disneylands are erected in the giant halls of five-star hotels in honour of the first birthday of a child who spent roughly 96 per cent of the party wailing. I’ve been forced to get out of my pyjamas and participate in multiple birthday parties for the same person because apparently birthday is no longer sufficient, we need birth week and birth month to recognise our existence on, what Carl Sagan labelled, “a mote of dust, suspended on a sunbeam”. Oddly, the more we learn about the awe-inspiring, jaw-dropping vastness of the universe, and how we’re less than a blip in the space time fabric, the more we insist on celebrating ourselves and our inconsequential lives.

In an essay titled “The Over-celebration of Life Events”, writer Alia Wong explains, “One of the biggest — if not the biggest — factors driving this phenomenon [of over-celebration] is social media. These parties wouldn’t be so popular if it weren’t for the exposure they get on platforms like Facebook and Instagram, where others see them and, perhaps, then feel inclined to throw their own.”

In this race to make a public production of our lives, do we no longer know have to have a private and intimate moment — with ourselves and our loved ones?

I’m told that celebrations serve a social purpose. They force people to show up and rally around those that they claim to care — in times of happiness and in times of pain. So maybe it’s time to take a step back, and instead of thinking of newer, increasingly ridiculous ways to torch money by making up events that force human interaction, let’s try this radical new thing called showing up for each other. You know, just because?

Sonali Kokra is a journalist, writer, editor and media consultant from Mumbai. She writes on feminism, gender rights, sexuality, relationships, and lifestyle.

The article was published in Arre.