The deal may be valued between $4 billion and $6 billion, the report said. Berkshire is looking to buy promoter stake via a preferential allotment, the report added. Shares of Uday Kotak-led Kotak Mahindra Bank Ltd. surged the most in over four years, after CNBC-TV18 reported, quoting unidentified people, that Warren Buffett’s Berkshire Hathaway Inc. is in talks to buy a 10 percent stake in the private sector lender.

The deal may be valued between $4 billion and $6 billion, the report said. Berkshire is looking to buy promoter stake via a preferential allotment, the report added.

BloombergQuint could not independently verify the news. Uday Kotak declined to comment on the matter on the sidelines of an event. In a response to queries from the stock exchanges, Kotak Mahindra Bank said it was unaware of any plans by Berkshire Hathaway to buy a stake. 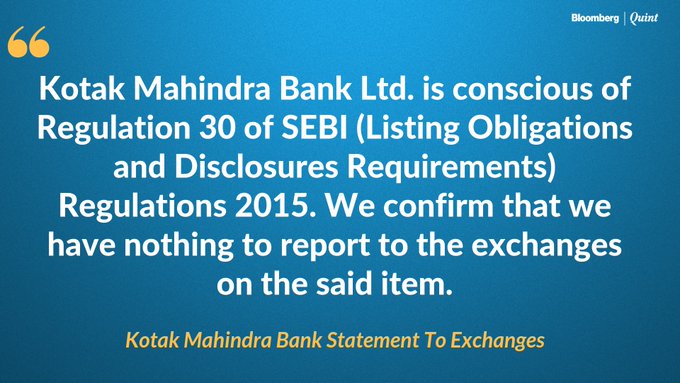 Kotak Mahindra Bank says it is unaware of any plans by Berkshire Hathaway to buy stake in the bank.Read: https://goo.gl/rQ3DAS
1:11 PM – Dec 7, 2018

See BloombergQuint’s other Tweets
Twitter Ads info and privacy
Kotak Mahindra Bank shares, which had risen as much as 14 percent to Rs 1,345 apiece, pared gains after the clarification.

The report of a stake sale comes just ahead of a deadline given to billionaire promoter Uday Kotak to reduce his promoter stake in Kotak Mahindra Bank.

As per the Reserve Bank of India guidelines, Uday Kotak needs to bring down his stake in the bank below 20 percent from the current 29.73 percent by December 2018. Promoter shareholding needs to be further brought down to 15 percent by March 2020.

In August, Uday Kotak proposed to reduce his promoter holding in the bank using preference shares rather than bringing down his share of common equity. Within 10 days of the proposal, the RBI told Kotak that the non-convertible perpetual non-cumulative preference share route to dilute promoter shareholding was not acceptable.

While the bank maintained that they are in discussions with the regulator on their chosen route to reduce promoter shareholding, time is now running out.

If the deal goes through, it will be Buffett’s second big investment in India after the Oklahoma-based company agreed to acquire a stake in Paytm’s parent company One97 Communications Ltd.

This article has previously been published on the Bloomberg Quint.