A huge salute to the entrepreneurial spirit of the Bansal Boys (Sachin and Binny) and their team of Flipsters for miraculously succeeding against a hostile government which handcuffed and threw them to the wolves of competition. 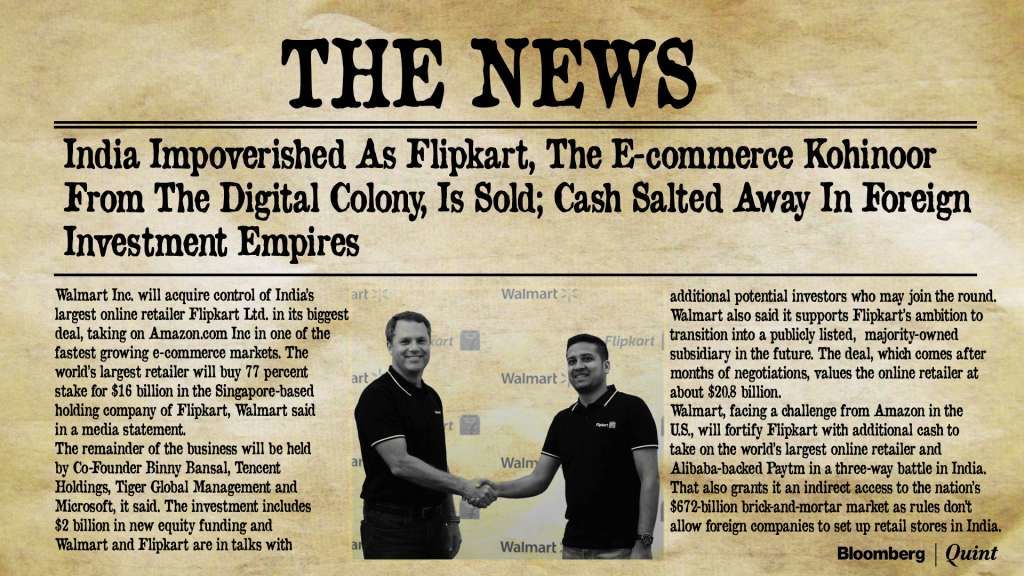 As with anger, so with euphoria; both cloud reason. So I was waiting for the congratulatory din to subside before giving my assessment. Honestly, it’s very mixed.

But first things first: a huge salute to the entrepreneurial spirit of the Bansal Boys (Sachin and Binny) and their team of Flipsters for miraculously succeeding against a hostile government which handcuffed and threw them to the wolves of competition. I will dive into that regulatory perfidy a bit later.

To begin with, I will deconstruct this lie which is being peddled aggressively:
Walmart’s acquisition of Flipkart has triggered $16 billion as the largest foreign direct investment in India.

I have used the italics to highlight the lies.

Yes, it’s ‘foreign’ because the asset being sold is a Singapore company, not an Indian one.

No, it’s not ‘direct’, because cash is not coming into the company, but going out to shareholders. In classic stock market terminology, it’s not a primary (FDI), but an indirect, secondary (FII) market transaction.

Heck, it’s not even an ‘investment’, because the dollars are not creating any new asset; instead, these are being used to purchase the old shares of existing investors.

And now to the biggest untruth, i.e. that all of this moolah is coming ‘to India’.

No sir, close to $14 billion out of the $16 billion could be flowing out to Japan, America, China and South Africa.

Only a measly couple of billion dollars could be working their way back into India. And yet we are the fools who are dancing!

The brutally honest headline should be this:

Two bright-eyed young engineers met in IIT-Delhi in 2005. They knew how Jeff Bezos had created Amazon by selling books online. In October 2007, they launched Flipkart, a simple website of book titles, and started delivering to buyers, going door to door on two-wheelers. They shipped 20 orders in their first year. Before long, a private equity fund knocked with a $1 million investment.

Restless and young, they wanted to grab the growth capital with both hands, but there was a problem. India had banned FDI in online retail (and the sale of a few books on a computer attracted the intimidating label of ‘e-commerce’!). It was a foolish, outdated policy, but it was the law.

So two perfectly law-abiding citizens were forced to invent a subterfuge.

An utterly unnecessary new company, WS Retail, owned by the same shareholders, was created. It was a regulatory red herring. Under those ridiculous rules, the website got positioned as a ‘technology platform’ and WS Retail became the ‘offline book-seller’. The ‘e’ was yanked away from the ‘commerce’ to create a fictional structure which passed muster with a bunch of clueless bureaucrats.

That was the Original Sin, born out of a stupid, self-destructive policy.

And you know what they say about the first lie, right? To cover it, you have to endlessly tell newer and more potent lies. So it was with Flipkart, as more investors came sniffing, with a $20 million goody bag.

Now the Bengaluru boys thought it best to abort their local offspring. They knew that if the ownership stayed ‘Indian’, they would have to rig a new ruse every day to dodge the bureaucrats. In October 2011, they flipped the shareholding into a new Singapore company called Flipkart Pvt Ltd.

In one swift hack, India’s policymakers had outlawed their most promising tech-and-commerce start-up.
Indian capital could no longer invest in an asset which would derive its entire value from India! If any Indian resident dared to put money in the Singapore holding company, he would be imprisoned under ‘round-tripping’ rules. So here was an asset built on the potential of India’s e-commerce space, but resident Indians could not invest in it. Now tell me, have you ever encountered a more absurd, value-destroying policy architecture?

But Wait, There Is More To This Regulatory Pantomime…

Since vague rules kept on changing, Flipkart had to set up eight different entities, three in Singapore and five in India, for separate wholesale cash-and-carry operations, one that provided the technology platform, another for payment gateway services, with a few lying dormant in a horrendously complicated structure, designed to obfuscate.

Meanwhile, in India, WS Retail was ‘sold’ to an Indian investor just as the dreaded Enforcement Directorate swooped down in 2012. Two of Flipkart’s ex-employees now ‘owned’ nearly half of WS Retail, even as the Bansals and their relatives resigned from the board.

The umbilical chord was apparent to everybody except the blind law-makers, as Flipkart and WS Retail shared offices and warehouses. It was a sham that was forced on a hapless Indian startup. It was cruel.
Before long, Flipkart’s woes spilled over into the courts. Traditional trade associations sued the government, alleging “circumvention of FDI rules”. The Delhi High Court ordered another investigation into 21 e-commerce companies, with Flipkart its prime target.

Hey, You Buy From Ram Lal Abdul Qadir & Sons, Not From Flipkart!

Eventually, everybody got a clean chit; but the government came up with another sham structure called an ‘online marketplace’, which continues to operate even today.

That means Flipkart and Amazon cannot sell anything directly to you.

Believe it or not, but Amazon and Flipkart are still banned from keeping any inventory.

They can only enable sales of mobile phones, wallets, shoes, and what-have-you to buyers. Of course, it’s another matter that Amazon and Flipkart do everything from taking the order, delivering the packet, and picking up the payment; yet the invoice is raised by Ram Lal Abdul Qadir & Sons!

Yes, This Transparent Chicanery Passes For ‘Public Policy’ In India

But worse, see how it kills Indian entrepreneurship. A few years before the Bansal Boys launched Flipkart, other first-generation founders were springing up in Silicon Valley and Shanghai. A chap called Mark Zuckerberg started Facebook; Jeff Bezos began tiny new adventures at Amazon; Jack Ma launched a quaintly named operation called Alibaba; and Pony Ma got Tencent off the ground.

Our Bansal Boys sweated under the dreaded midnight knock, ceding control with every chunk of equity that was sold to the foreigners. Ultimately, they raised $6 billion but sold their dream for only 3.5 times that capital infusion, for a mere $21 billion.

Now, look at what their American and Chinese peers pulled off. Jeff, Mark, Jack, and Pony are each running half a trillion dollars plus of market value today; ironically, their individual shareholding is about equal to what the Bansal Boys owned in Flipkart!

So here’s the tragedy:

It simply need not have ended in one of the Bansal Boys walking away “sadly” from what he founded, while the other became a ‘salaried manager’ for an American behemoth. It’s sad. Awfully sad.
Imagine if our policymakers had taken a different track:

Today, Flipkart’s founders would have been in substantial control of their brave enterprise. Their eyes would be fastened on creating a half-trillion-dollar company by 2025. And their names may have been taken in the same breath as Jeff, Mark, Jack, and Pony. Alas!
Shame on you, Government of India (both UPA and NDA).

Raghav Bahl is the co-founder and chairman of Quintillion Media, including BloombergQuint. He is the author of two books, viz ‘Superpower?: The Amazing Race Between China’s Hare and India’s Tortoise’, and ‘SuperEconomies: America, India, China & The Future Of The World’.