Up and away: A low-down on Amazon CEO Jeff Bezos’s grand moon plans

Blue Moon lander will be powered by a BE-7 engine that works on liquid hydrogen; Bezos hopes to refuel it from the hydrogen on the lunar surface 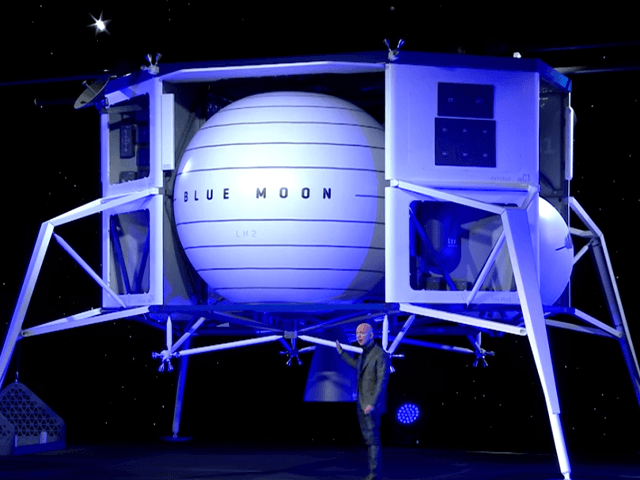 On Thursday, May 9, Amazon CEO and founder Jeff Bezos unveiled his plan to take humans to the moon. At his presentation for Blue Origin, a rocket company he founded in 2000, Bezos showed a mock-up of a landing vehicle called Blue Moon that he designed. He said that this was the first step in building colonies for humans in space.

Bezos explained his fundamental ideology—that Earth is finite and the human population’s needs are too vast for the planet’s limited resources. Hence, Bezos believes we should turn our sights to space.

“We get to choose… Do we want stasis and rationing or do we want dynamism and growth? This is an easy choice. We know what we want. We just have to get busy,” said Bezos. “… This is going to take a long time, this is a big vision.”

All about the Blue Moon lander

Unveiling the Blue Moon lander, Bezos said he has been working on its design for three years.

The lander will be powered by a BE-7 engine that works on liquid hydrogen because it is a high performing fuel. Bezos also hopes to refuel the lander from the hydrogen on the lunar surface itself.

The engine also has 1,000 pounds of thrust and “deep throttling capability”, which is critical for a moon landing, says Bezos. It will be hot-fired for the first time this summer.

The Blue Moon lander will “soft land in a precise way” on the moon’s surface, said Bezos. It can carry up to 3.6 metric tons on the moon. The lander’s outer, stretched appendages can also support 6.5 metric tons on the lunar surface and help the main body of the vehicle land at an incline of up to 15 degrees.

The Blue Moon lander can land within 75 feet of its target, Bezos added.

He further said that the deck of the Blue Moon lander has been designed to ensure it can carry and deliver a variety of payloads for research. This deck also has a star tracker that allows the vehicle to navigate autonomously and an optical communications system that can transmit data back to Earth. The vehicle itself can terrain map, as well.

Bezos also unveiled the New Shepard rocket, a reusable rocket that is planning to ferry tourists in space.

“New Shepard is a suborbital vehicle designed for space tourism,” he said. The New Shepard has already had three successful launch tests and will land vertically.

New Shepard is also fueled by liquid hydrogen and has human-rated mechanisms, like safety exits.

Bezos is not the only one attempting to make recreational, manned space travel a reality.

In fact, Musk teased Bezos on Twitter by altering the “Blue Moon” lettering on his prototype and saying, “Oh stop teasing, Jeff”.

Musk is attempting to craft Space X’s Big Falcon Rocket (BFR) as an ideal vehicle for space travel to Mars. The rocket will be able to carry 150 tons or 150,000 kg of payload. Musk also wants to make BFR reusable, like Bezos wants to make his.

Moreover, Musk is planning to make BFR as safe as commercial airlines with 40 cabins, storage areas, and an entertainment zone.

Sending humans to the moon is a difficult enough task, so a Mars landing makes for a seemingly unfathomable challenge.

Vox says we neither have powerful enough rockets to carry supplies and travellers to Mars nor the technology to safely land a human crew on the red planet, yet. Moreover, such missions and the research that precedes it is wildly expensive.

Sending humans to the moon is comparatively less difficult, considering the US and Russia have done it before.

India will join the ranks of the elite space-going countries by sending Gaganyaan, its first manned flight, to the moon. Three Indian astronauts will be sent to orbit the Earth at a 400-km distance for about a week as they conduct various tests on microgravity.

India is also planning to launch Chandrayaan 2, a moon lander, by mid-July. Chandrayaan 2 will be made of an orbiter, moon rover, and lander that will conduct tests on the lunar surface and send payloads of data back to ISRO.

A journey to Mars will take about six months. So another issue is that scientists do not fully know the impact of long-term space travel on humans.

A giant leap for mankind

NASA conducted an experiment, the ‘Twins Study’, where two astronauts, who are twin brothers, were observed for the biological impact of space travel.

One of the twins, Mark Kelly, spent 340 days in space and conducted around 400 experiments to see how his body reacted while subjected to extreme conditions on the International Space Station. His twin brother, Scott Kelly, remained on Earth and served as the control subject who Mark could be compared to.

NASA found interesting results in Mark’s gene expression and immune system—he aged slower than his brother and was able to maintain his immunity through normal vaccinations. Mark’s genes also behaved differently in space but reverted to normal levels within six months back on Earth.

To send people to Mars or the moon or simply to keep them in space-like conditions for long periods of time, space research needs to be thoroughly funded. Moreover, to ensure extraterrestrial travel is a reality, companies like SpaceX and Blue Moon need to do their due diligence with safety tests.