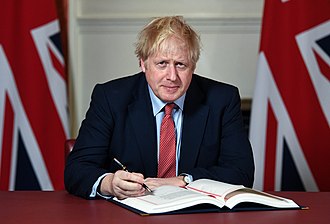 Johnson signing the Brexit Withdrawal Agreement. Free trade with India is a priority for post-Brexit Britain

Interestingly, half the British-Indian population in the UK hails from this state.

The UK PM is expected to announce a slew of commercial agreements and hold bilateral discussions with a focus on the UK and India’s trade, investment and technology partnership, particularly focusing on strategic cooperation in the Indo-Pacific.

Britain has made getting a trade deal with India one of its post-Brexit priorities, and India forms a significant part of its foreign trade policy as one of the fastest-growing economies in the world.

India on the other hand wants greater opportunities for Indians to live and work in Britain.

Any trade deal will likely be contingent on relaxing stringent visa rules and lowering of fees for Indian students and professionals emigrating to the UK.