Taking inspiration from Watson, Delhiite Shruti Sharma decided to do the same on the Delhi Metro. 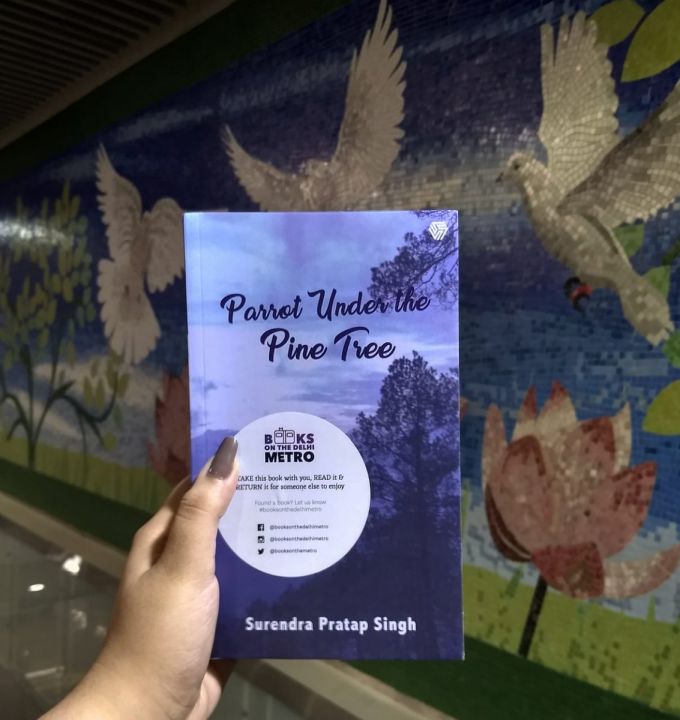 Next time you are making your daily commute on the Delhi Metro, try to look around the corners of the train, underneath the seats, between banisters and you may find a pleasant surprise: a book to read. Started by Delhiite Shruti Sharma, Books on the Delhi Metro is a mobile library of sorts which aims to promote a reading culture where passengers can pick up, read, and drop the book again so that someone else can do the same and maintain the cycle.

From London to Delhi

Sharma’s admiration for Watson is what compelled her to emulate the latter’s move. Speaking to Qrius, Sharma says, “I was checking her Instagram (Watson’s) profile, and I got to know that she’s dropping books around the London Underground. That moved me because she’s a person whom I really admire. Someone like her distributing books and becoming a book fairy really caught my attention. After a little research, I stumbled upon Books on the Move – and that is how Books on the Delhi Metro began.”

Books on the Move is a global book sharing initiative with an aim to get passengers to read on their commute. The initiative began in London in 2012, and currently has 20 branches across 14 countries. Through the initiative, hundreds of books are left on public transport around cities worldwide. The books are left to be picked up, read, and returned. Books on the Delhi Metro functions in the same way. But what would happen if anyone discontinued this cycle or never returned a book? Sharma says, “It may happen that a person picked a book up for the sake of it, and the book is probably rotating or simply stored in some place where it’s not being used. We like to believe that someday the person might begin reading the book, or at least pass it on to a person who likes reading.”

Sharma rules out the possibility of the books being stolen. She says that theft cannot be defined in such an instance as the resale value of a book is generally low.

The Delhi Metro is the lifeline of Delhiites commuting by public transport, and it sees an estimate of 27 lakh passengers daily. When it comes to the Mumbai suburban rail network, the lifeline of Mumbaikars, there’s barely space to move, let alone read while travelling. Overcrowding on Mumbai’s local trains has led to the death of 2,300 people in 2017 alone. Will Books on the Delhi Metro be able to survive in Mumbai? Sharma seems confident, “I wholeheartedly believe that it will flourish. I know how much heart the city has, and there are book lovers as well. So Books on the Delhi Metro will definitely function, but Mumbai seems to have infrastructural issues.”

Sharma spoke about some of the challenges her friends faced when they tried the initiative on the Mumbai suburban rail network, “The authorities did not allow the initiative because they thought it would turn into a security issue.” In addition to security issues, connectivity in the Mumbai Metro is still gaining ground, which could be the reason why a mobile library might not be feasible yet.

At a time when technology is gradually taking on a ubiquitous role, promoting the reading of physical books might be an uphill task. However, the growing role of technology was never something that Sharma paid much attention to. Would something like a Kindle dominate the need for physical books? Sharma says, “I think that a Kindle might be a bit pricey as compared to books. I feel that a Kindle is meant for a more engrossed reader – someone who can’t afford to spend time doing anything else.”

Sharma then goes on to say that she has received requests to distribute e-books, but maintains that taking the digital route could be an extremely tricky task.

Books on the Delhi Metro may not yet be ready to go digital, but the initiative is sure to tap into the benefits of social media. Sharma was of the opinion that social media keeps us afloat. She added, “It is the reason why we are here – I totally credit social media for our current position. I feel that we found the correct medium to promote the initiative. Facebook, Instagram, and Twitter are hugely popular, and these are crucial channels to us. Our traffic also comes through social media. It connects us with people; it connects us with authors and publishers – so I think it’s the right place to be.”

Social media truly is an effective space to promote an initiative. The presence of Books on the Delhi Metro has been amplified on social media, and various other book-related initiatives have cropped up in India.

Similar to booksellers on Mumbai’s streets, Himanshu S gathers books from his friends’ houses and sells them in suburban Bandra at throwaway prices. 24-year-old bibliophile Priyesh Thakkar introduced Sip and Swap in Bengaluru in November 2017 which allows strangers to exchange their views on various books. Harnessing the power of social media, Delhiite Saurabh Hooda launched Lenro – a type of social network where people can meet and then exchange books.

All these initiatives indicate the importance given to reading and books. Reading, in its practical sense, is rarely promoted within the Indian education system and initiatives such as Books on the Delhi Metro are just what is needed to help revive the reading culture in India.