A report by the WWF published on October 30 reveals how our actions are degrading the natural world – the very basis on which our livelihood depends. 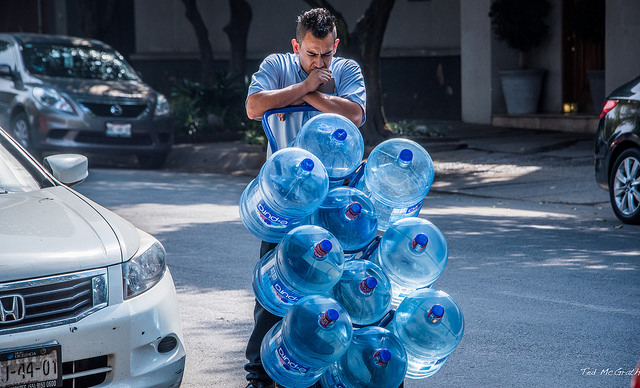 Cape Town’s recent drought brought into sharp relief how people behave and the choices that they make when resources become scarce. The South African city was teetering on the brink: a sustained dry spell meant that residents were faced with “day zero” – the very real possibility that water supplies could be turned off, leaving them queuing for access to this most important of natural resources.

Day zero was averted in large part by people’s willingness to use dramatically less water than normal, while waiting for rain to fall. This was at once a worrying story about the impact of these “mega droughts”, which, according to top scientists from around the world, have become substantially more likely due to climate change. At the same time, Cape Town told an optimistic tale of a society pulling together in a crisis.

My research, recently published with colleagues Oliver Vitouch and Judith Glück from the University of Klagenfurt, shows that we perhaps shouldn’t be so surprised by the way that the people of Cape Town responded to water scarcity. In fact, people may be more willing to share scarce resources they really need than apocalyptic Hollywood movies may suggest. As such, the results offer hope that, in a world facing a dramatic population increase and a potentially greater struggle for resources, it will not be every person for themselves.

Our research asked how a crucial resource is shared by individuals when it is critical to their physical needs and well-being. The premise was simple: are people more or less generous with a “primary” resource such as water than with a “secondary” one like money, where needs may strongly vary across individuals and which is also more abstract?

The results revealed that even when people themselves were in need of water, they still acted in an altruistic way by sharing the very valuable and very limited supply of water they had equally with others. This was true even when they didn’t know who they were sharing their water with. This also contrasted with how they shared money.

In our study, participants were invited into the lab in pairs (but they did not have a chance to meet or get to know each other). In separate rooms, they were asked to ride a stationary bike for half an hour to work up a thirst. They did not have access to a drink for an hour before, during or after the study.

We then used a used a common experiment that’s used in experimental economics research called the “Dictator Game”. One person was made an “allocator”, in control of giving out money and water. The other was the “recipient”.

The pairs were placed in two experimental conditions. In one condition, allocators received water and money as a windfall to give anonymously to recipients. In the other, those doing the allocating were informed that they had “earned” the water and money during the training session. Recipients in both conditions indicated how much they expected to receive. This was designed to test if their expectations were linked to whether or not allocators had “earned” the resource.

The results were intriguing: the allocators who earned the small amounts of water gave about the same as those who hadn’t earned it. In both groups, they were willing to share water more generously than money. Similarly, recipients expected to receive more water than money.

This goes against the idea that people are purely self-interested. One may argue that thirsty allocators were less generous because water simply had less value compared to money. But findings from other research suggest that what we observed may be guided by increased empathy towards others with a similar need which makes altruistic behaviour more likely. This may also explain why a related study conducted at UCL showed that when thirsty recipients were allowed to reject water offers, they were less likely to accept the ones that were very small and may thus have been perceived as unfair.

Perhaps such a strong sense for fairness also speaks to the age-old wisdom that despite money’s value, we know deep down that it’s no substitute for the basics we and others need day to day. Ultimately, a thirsty man knows he can’t drink the money in his pocket; and others can’t either.

Research such as ours aims to better understand what drives people’s behaviour – and how likely they are to cooperate – when resources are scarce. This may allow us to predict how individuals will behave before they run out of a resource.

We now need to learn how sharing varies in different contexts, with different resources, when scarcity occurs in the real world and over long periods of time, like during the drought in Cape Town. The events in Cape Town are another warning about the consequences of climate change and the increasing need to preserve the world’s natural resources. But our results may also indicate that it is when crises are at hand and resources are scarce that our shared humanity is more likely to show.

Astrid Kause is Research Fellow, Management at the University of Leeds.