This potentially dangerous missing leg of mine

Public infrastructure in India is geared to be most comfortable for the young, heterosexual, able-bodied, middle/upper class, male adult. 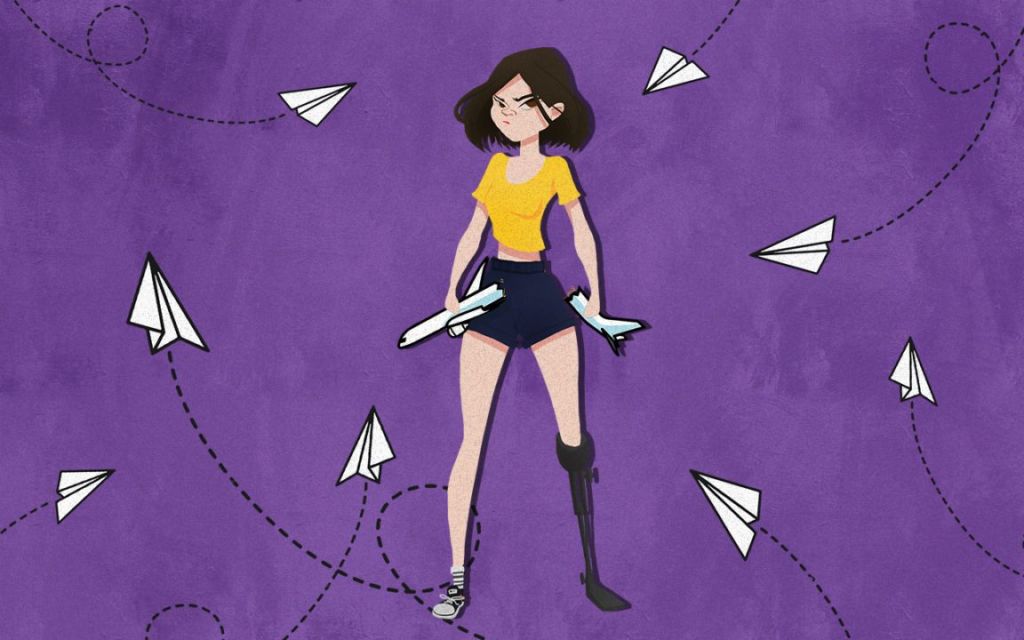 I have a prosthetic leg, which makes me a security threat. Every time I go through an airport scanner, it beeps maniacally, like I’m a ticking 9/11 waiting to happen.

If I was filmy, I’d say my life is like a bad Bollywood movie. Since I am, in fact, quite filmy, I’ll reiterate that my life is indeed like a bad Bollywood movie. I am the bumbling but intelligent, short-term unfortunate but long-term lucky, not-exactly-Deepika-Padukone but pretty-damn-close kind of a heroine of my life, with several villains, including the financial gods, chauvinist internet trolls, and airport security officials stacked against me. While the financial gods and chauvinist internet trolls are the common denominator villains, my pet villains are airport security officials.

Don’t get me wrong. I don’t have a huge problem with being occasionally felt up on my way to a holiday but you see, going through airport security for me is more traumatic than a lingering touch on my butt. I have a prosthetic leg, which makes me a security threat. It means that every time I go through a scanner, it beeps maniacally like I’m a ticking 9/11 waiting to happen.

Here’s what inevitably goes down – the security officer on duty worriedly summonses her superior on the walkie-talkie. The superior arrives. Superior and said official survey me suspiciously, hands on hips. Occasionally, they share short anecdotes with each other (apparently under the impression that my eardrums are also amputated) about how a woman in China recently smuggled a two-foot-long gun in her prosthetic arm or how an Afghani man hid ₹2 crore worth of cocaine in his artificial leg. They dust their hands and exchange looks of finality. And then they ask me to take it off. The events that unfold after this may take any of the following paths:

Scenario Numero Uno: I challenge them and ask them to use an ETD (Explosives Trace Detector) machine or a pat-down check in a private room – standard practices at international airports when it comes to fliers who wear artificial limbs.

In this case, they usually give me a death stare and start quizzing me. Who told me about this ETD machine, huh? Can I tell them the full form of ETD? Do I know how to do their job better than them? Should they take this as a sign that I’m more suspicious than I look? (FYI, I am 4’11”, skinny, and look like I need ID to grab a drink. So yeah, I look pretty damn suspicious by conventional standards.)

They then proceed to tell me how they’re doing me such a huge favor by giving me a “private room” (i.e. converted storeroom) and “agreeing to let me on the flight” despite me being “uncooperative”.

Forty minutes later, I have no choice but to be bullied into taking off my prosthetic leg. By the way, this also involves me taking off my pants. My leg is then passed through the baggage scanner along with other people’s phones, bags, and laptops as the above mentioned “other people” try not to stare at the smoothly sliding leg but utterly fail at it.

Public infrastructure in India, is geared to be most comfortable for the young, heterosexual, able-bodied, middle/upper class, male adult.

Post this, it is handed back to me, and as I walk back to pick up my stuff from the scanner, I can feel everyone’s eyes boring into me as they probably think, “Poor girl. But kudos to our security officials. Who knows a potential terrorist could have hidden inside that leg. Now come beta, puke out those drug bags you’d swallowed earlier.”

I tweet about it angrily. It gets retweeted, a few media houses pick up on it and blow it up into a grouse with the airline, which has nothing to do with the security procedure at all. I write to about ten CISF and BCAS email IDs, and get a reply three months later. The “reply” comes in an unmarked mail, and is a cold-hearted, scanned copy of a section of the Aviation Law. It is a gazillion miles from an apology. Operation Ruined Trip has been successfully executed.

Scenario Numero Dos: I make puppy eyes at the security officials on duty. I tell them about how I face this kind of discrimination everywhere, and how other airports have provisions for this kind of thing, how humiliated I feel when a part of my body is passed through a place along with belts and purses. See them look guilty, push a little harder. I’m made to hear stories about how this is not in their hands, it’s just airport policy, how bad they feel about it too, how I should write a complaint in their flowery pink feedback book.

Fifteen minutes later, I still have to take off my pants and watch my leg being lumped with ugly purses. It is the same scenario minus the animosity and furious tweeting, but at least Operatin Ruined Trip is stopped firmly in its tracks, even though I feel awful at not having stood up for myself.

I’ve learnt to wear shorts in preparation now. This means more stares through the queues at entry, through check in, and all the way till security. At first request, I take off the leg in public and obstinately stand on the other leg as it goes through the scanner, declining a chair. It’s my form of protest, but I’m fairly sure nobody gets it. I still get pitiful glances at every stage, but my savage glares in return are the kind of thing that probably makes atheists turn to higher powers for help.

I don’t mean to vent at random airline passengers who are more or less sympathetic bystanders, but there are always people who call me an “attention seeker” and a “cry baby”, in addition to those who give me a rap on the knuckles for expecting “special” treatment. I have gone hoarse repeating this, and I’ll say it a million times more – I do not think I am above security checks. I also understand that I come with a whole different set of potential security risks that “normal” people might not. But when provisions for amputees wearing prosthetic limbs do exist, can we please, pretty please, just fucking use them? And would it be too much for the airport gods to invest in a civilised full-body scanner instead of the endless fucking re-carpeting?

Public infrastructure in India, is geared to be most comfortable for the young, heterosexual, able-bodied, middle/upper class, male adult. Cross off any one of those adjectives, and you have a bit of a problem. Cross out more, and even the simplest of procedures become Hercluean tasks with a nice side helping of trauma. Right now, this is not a great country to be any kind of disabled.

Until that changes, I leave little notes to the CISF (in one of their flowery pink complaint books that I’ve come to regard fondly): Dear CISF, as much as I would like it to be, stripping down in a dusty room in front of a bulky security guard is not my idea of vacay action. Even a lingering touch on my butt is preferable to that.

Antara Telang is the Content Director at LaughGuru, an e-learning platform for kids.