Women might be heli-dropped to Sabarimala: All you need to know 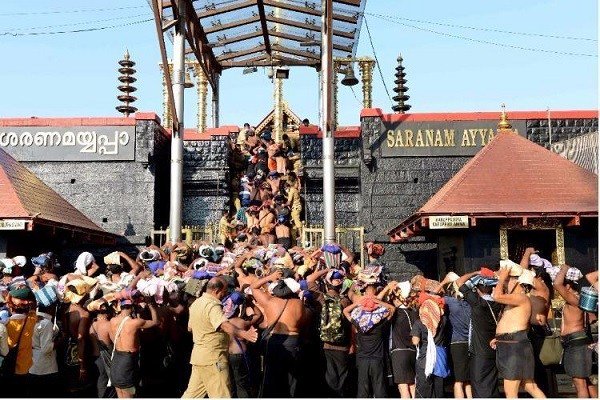 The Kerala police are considering the use of military helicopters to airlift women devotees to Sabarimala from Thiruvananthapuram or Kochi as a last and drastic measure to save them from the ‘Save Sabarimala’ protesters.

As many as 560 women between the ages of 10 and 50 have shown interest in visiting the temple when it opens for the 41-day Mandalam-Makaravilakku period on November 17.

Three days back, the Kerala police had launched the portal sabarimalaq.com to control pilgrims during the three-month season. The website saw more than 3.5 lakh registrations, of which 560 are women in the reproductive age. The safety of these 560 women rests in the hands of enforcement agencies in Kerala. The state’s law enforcement agencies have been tasked with providing a safe passage to devotees.

The temple gates were opened weeks after devotees protested against the Supreme Court verdict allowing women of menstruating age to enter the temple premises. To avoid such violent incidents, the Kerala government deployed more than 2,000 police personnel at the shrine.

In addition, a 20-member commando team and 100 women personnel were also stationed to ensure that no harm is inflicted upon devotees and a law and order situation is maintained. Furthermore, the police said that prohibitory orders banning gathering of four or more people have been issued for Sabarimala, as well the base towns of Pamba, Nilakkal, Erumeli, and Elavunkal, the Indian Express reported.

On November 7, a case was registered against 200 people after a woman above menstrual age was allegedly manhandled at the Sabarimala shrine.

Members of the Sangh Parivar protested when a few young women reportedly approached the steps near the sanctum sanctorum of the hill shrine. The Sangh Parivar members suspected the women to be of “traditionally barred” age group of 10-50 years. The protesters reportedly targeted camerapersons trying to report visuals of the protest.

Chief Minister Pinarayi Vijayan targetted the BJP, and said that the Narendra Modi government had no intention to protect Sabarimala’s rituals. “Even Sangh Parivar leaders are violating the rituals and traditions. BJP’s intention is to create violence. I don’t go to temples. But, recently I had gone to Sabarimala temple without climbing the sacred steps. That is how we respect the traditions,” he said in Kozhikode, the Indian Express reported.

The Kerala High Court, on Thursday, rejected a plea seeking to direct the Travancore Devaswom Board to file a review petition in the Supreme Court opposing the apex court’s verdict allowing women of all ages to enter the Sabarimala temple, Live Law reported.

Petitioner M.K. Gopinath maintained that the Devaswom Board, which runs the Sabarimala shrine, is a trustee of Lord Ayyappa, and hence had to act in accord with the deity’s wishes. The petitioner urged the Kerala High Court to direct the state government to file an affidavit in the case, taking into consideration the desire of several Ayyappa devotees to preserve existing traditions.

However, Justices P.R. Ramachandra Menon and N. Anilkumar said the government’s decision to not seek a review should not be regarded as dereliction of statutory duty and that such a decision does not warrant judicial interference.

The Supreme Court, in September, ruled that women will be allowed entry into Lord Ayyappa’s Sabarimala temple in Kerala. The constitutional bench headed by then Chief Justice of India Dipak Misra said that the rules put in place by the temple administration were in violation of Articles 14 and 25 of the Constitution.

After the Supreme Court’s verdict gave women access to the Sabarimala Temple, the Travancore Devaswom Board was “disappointed”. But the board maintained that they will accept the verdict. The body informed the court that they wished to continue with existing practices, but nothing could be done now. However, the board contemplated the filing of a review petition, president A. Padmakumar said.

Rahul Easwar, president of the Ayyappa Dharma Sena and one of the main activists who supported the ban on the entry of women into the temple, was also planning to file a review petition.