The unwitting victims of BSNL’s debt, dues and delay fight back

The state-owned loss-making telecom firm hasn’t released the salary for 1.76 lakh employees for the month of February due to financial constraints. 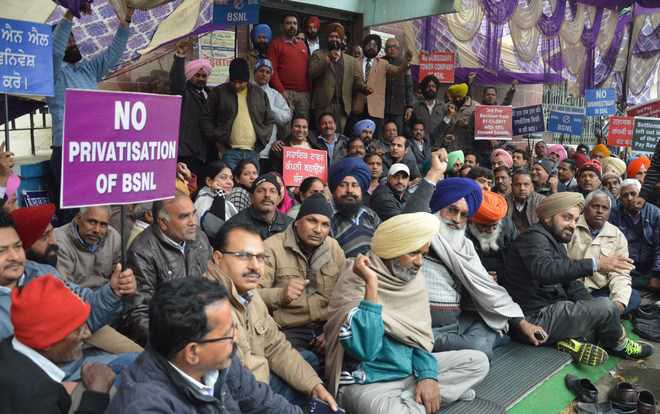 BSNL employees stage a dharna in 2017 for wage revision and against privatisation. Credit: Twitter/@ANI

Earlier this month, news reports claimed that the state-owned telecom firm, in the red for more than five years, had not released February salaries due to financial constraints. After facing outrage from many fronts, BSNL claims to have cleared the February dues of 1.76 lakh employees.

With a sustained stagnancy in BSNL’s revenues, 55% of which goes towards payment of wages, salary delays have been in the fray for some time. PTI reported that BSNL planned to approach the National Company Law Tribunal to recover dues of about Rs 700 crore from Anil Ambani’s Reliance Communication (RComm).

“BSNL has already invoked bank guarantee of around Rs 100 crore submitted by RCom for default on payments. Decision was taken on January 4 by BSNL Chairman and Managing Director Anupam Shrivastava to start legal proceedings against RCom for recovery of dues of around Rs 700 crore,” sources told PTI.

Financial troubles for the erstwhile telecom giant began around the time that Reliance Jio disrupted the telecom landscape with predatory pricing. “Financial crisis is being faced by other operators also but they are managing the situation by infusing huge amounts,” a letter by All Unions and Associations of BSNL said.

The government’s open endorsement of such private telecom companies comes at the cost of neglecting the public sector ones. The Opposition has been quick to politicise the matter, but the disintegration of public sector units in India, like HAL, MTNL and LIC, began long back.

However, a BSNL official did not beat around the bush in telling Financial Express, “As the government has not given any financial support, the salaries are being delayed.” Some sources also claim that the BSNL board has tendered a proposal to avail a bank loan but the department of telecommunications has not approved it yet.

The employees’ union subsequently wrote to telecom minister Manoj Sinha urging the government to disburse funds to the company not only for payment of salaries but also to revive the ailing firm. They are also taking to social media to voice their woes and holding demonstrations to that effect.

In a viral video on Twitter, Binu Pandey, a single parent and clerk at BSNL’s head office at Rajnagar, Ghaziabad, presented the stark aftermath of wage non-payment.

Admitting to not being able to feed her children or pay their school fees or auto fares, Pandey breaks down in the video claiming that her salary is her only source of income and that she did not even have relatives in or around Ghaziabad to help her financially. She said she’s making do with borrowing Rs 500 or Rs 1000 from people.

“I have not been able to pay my milkman or my maid. I tell my daughter’s friends to pick her up on the way to school because it is a little far and the auto also has to be paid. I have not recharged my phone either, because my salary is limited and I have to prioritize. At this moment, basic food is more important to me,” Pandey told The Quint, adding she had not received any financial support from any seniors in office, who are paying off their own loans.

But this is not the first time BSNL has denied its employees their dues. After 25 years, another single parent—a 70-year-old widow employed in clerical service by the state-run BSNL in 1971—is still awaiting compensation and justice.

Chinmayee Moitra is a trailblazer for all women fighting tirelessly against the abuse of power and gender wage gap at the workplace today. Yet, in many ways, her ordeal has been unimaginable and her story, unique.

With a family of six to support, sole wage-earner Moitra sued the senior management at BSNL (then known as the Department of Telecom) in 1993, who first denied her equal and commensurate pay, a deserved promotion, and later manufactured a situation where she could neither work nor withdraw salary and allowance rightfully owed to her.

Denied her dues for over two decades, the widowed septuagenarian was, until recently, engaged in a long-running court battle. However, despite winning the 24-year-long trial last year, she is still not within stone’s throw of real justice.

Employed as a telephone operator in 1971, Moitra was soon appointed as a stenographer (Grade 3) at the telephone exchange office in Kanpur (Saket Nagar), and later as the personal assistant to then Deputy General Manager (P) A.N. Rai.

View: Submission of complaint to District Magistrate and Superintendent of police, Kanpur

After her protests against this move went unheard within the office, she appealed to the Central Administrative Tribunal (CAT) Allahabad about the injustice, following which the bench took stock of the evidence and asked the Kanpur office to maintain status quo while reconsidering her application for promotion.

This was the turning point. Soon after CAT issued the order, members of the senior management prohibited her from signing the attendance register, and later denied her the right to enter the office premises. Speaking to Qrius, Moitra said this was used later to allege that she had been negligent and absent from work.

“None of my former colleagues came forward to support me,” she says, recalling the humiliation she faced on her last day of work. “The few who did were threatened with termination of their jobs.”

As punishment for exercising her right to approach and demand the she deserved, in February 1994, BSNL ordered the foreclosure of all payments without any notice or indication of when they will be released, according to reports and court documents now in Qrius’s possession.

Even when she received her promotion order to Lucknow (to serve as Grade 2 stenographer), her controlling officer AN Rai did not issue the relieving order for her to be able to join her new post, her son Tanmay told Qrius. At this point, it was six months since her salary and allowances had been suspended.

Despite running from pillar to post, Moitra has still not received a penny to this day, but she remains firm and resilient in her struggle for justice. At the time, however, she was under immense financial and emotional duress, caring very little for enforcing the CAT judgement, worrying instead about the mouths she had to feed.

With her request for travel allowance denied, Moitra had no way of relocating and taking up the new assignment in Lucknow, for which she faced constant derision, humiliation warnings of strong disciplinary action if she failed to assume her office in Lucknow.

During the intervening period, she lost her ailing and unemployed husband, and managed to raise four children with loans from relatives, meagre earnings from tuition to afford a hand-to-mouth existence, while knocking on BSNL officials’ doors for her dues.

A new battle began for Moitra in 1999 when she was coerced into accepting compulsory retirement Not only was the mandatory pension (due to all retired employees) was never disbursed to her, Moitra also claims she was served multiple letters of eviction from the government service quarters her family was occupying then. This was when she moved the tribunal.

RTI’s claiming that BSNL did not offer her subsistence or travel allowance during the enquiry of compulsory retirement are in Qrius‘s possession; even the CAT deemed this inhuman. Yet, the National Human Rights Commission later dismissed Moitra’s complaints.

In 2003, she approached Allahabad High Court which delivered its final verdict in 2014, asking for the case to be transferred back to CAT Allahabad. Finally, in 2018, the compulsory retirement was rendered null and void, upholding that the maltreatment meted out to Moitra was nothing short of inhuman injustice and constituted the worst form of harassment.

BSNL was directed to compensate for the period preceding her wrongful termination, and give Moitra her due arrears and pensions thereafter.

Despite losing their subsequent appeal to Allahabad High Court in August last year, and another application in November, BSNL is still culpable of keeping the 70-year old waiting for her dues.

In refusing to execute the court’s and tribunal’s orders, BSNL is not only transgressing the legal system but prolonging the fallout Moitra has lived with for so long—for protesting against workplace injustice and violation of her rights.

Moitra intends to move Supreme Court against this act of blatant contempt, not only to ensure that BSNL pays its dues but also pays for violating her right to earn since 1994.

With growing solidarity from her lawyers, media and her family, she believes, justice can no longer be denied or delayed. With the employee associations and unions of BSNL now joining the struggle against similar institutional failure and abuse of power in the government-run company, it is voices like Pandey’s and Moitra’s that ring the loudest.