The idea of many religions

The Japanese emperor also believed there was one truth. His truth was the religion of Shinto and Buddhism. 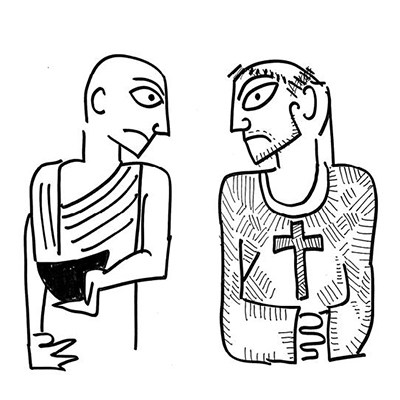 Two hundred years ago, the Europeans did not believe in the existence of multiple religions. They believed there was only one truth in the world and, therefore, only one religion. The Europeans believed the only truth was Christianity.

For them, Jews and Muslims were heretics, who had misinterpreted the scripture, while the people of Africa, America, Australia, China and India, who followed polytheistic traditions, were infidels and idolaters who had to be converted to the truth of monotheism.

It is only 150 years ago that the idea of multiple truths emerged. This was following an engagement of these monotheistic beliefs with the beliefs prevalent in Japan. The Japanese emperor also believed there was one truth. His truth was the religion of Shinto and Buddhism. He refused to allow churches to be built on Japanese soil. This led to violent confrontations and negotiations with European powers. This tumult ended with a contract being written between the emperor of Japan and the colonial powers, in which the latter had to acknowledge the existence of different religions being prevalent in the world. This was primarily done to allow missionaries to build churches in Japan. This ideology of multiple religions and plurality was clearly strategic, born out of the need of the church to penetrate the Far East.

As Christian missionary activities spread across the eastern lands, they faced a lot of resistance. In Thailand, for instance, the Christian missionaries were equated with the followers of Buddha’s evil cousin, or Buddha’s opponent, Devadatta. The story goes that Devadatta opposed Buddha so much that the earth split open and he went to hell or Naraka, where he was impaled by many spears. When the Christian missionaries came to Thailand, the king of Thailand saw the crucifix around their necks. He equated the idea of the man impaled on the crucifix as Devadatta, the opponent of Buddha. So, for him, Christians were Devadatta-followers, hence anti-Buddhist.

Just as the Christians saw people worshipping idols as infidels and idolaters as worshippers of false religions, the king of Japan and Siam saw the Christian missionaries as followers of false doctrines. These tensions, too, were eventually reconciled to the idea of multiple religions and respecting other people’s religions.

Until the 1950s, during WWII, the Jewish tradition was not seen as part of the truth, as anti-Semitism was rife among Christians. Only after the 1950s, after the Holocaust, did phrases such as Judeo-Christianity emerged to indicate commonality between Christian and Jewish faiths. It is only after the Gulf War that people started talking about Judeo-Christian and Islamic traditions as part of an Abrahamic structure. Prior to that, the Christians saw Muslims as heretics and the Muslims saw Christians as followers of an older faith, not up-to-date with the last prophet. Many fundamentalists reject the term Abrahamic faith, arguing that it is too broad, and insisting that each religion is distinct.

So, one must always remind oneself of the notion of multiple religions and plurality being quite a recent phenomenon, born of political compulsion, and not quite of enlightenment.

This article has been previously published in Mid-day. It has been republished with permission from Devdutt.

Devdutt Pattanaik writes on the relevance of mythology in modern times, especially in areas of management, governance, and leadership.