Native to the coastal regions in and around Central America, black sapote is a fruit, related to the persimmon, that tastes like chocolate pudding. 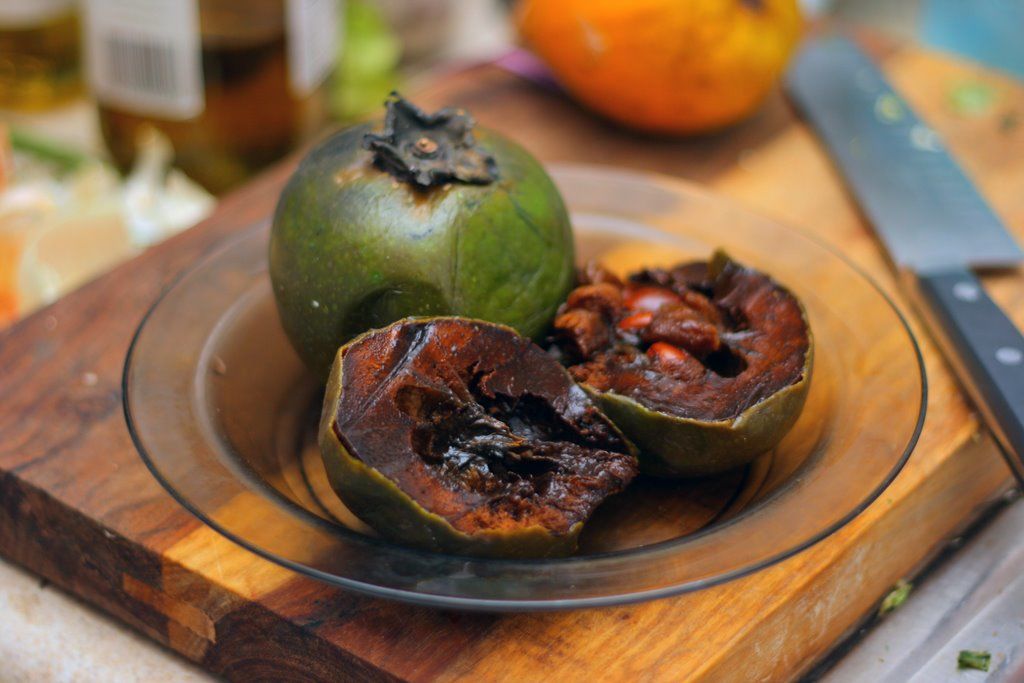 Recent headlines that chocolate supplies could fall short of demand by as much as a million tonnes by 2020 have been alarming. Those in despair over the news can take heart, however, as substitutes are available to get you through the rough times, including one that is actually relatively healthy – black sapote.

Native to the coastal regions in and around Central America, black sapote is a fruit, related to the persimmon, and it is today cultivated primarily across the Caribbean, as well as in Mexico, Australia and the Philippines.

On the tree, the fruit sort-of resembles a green tomato when ready for picking. And it is extremely important that you don’t try to pick it too early or eat it right off the tree.  Unripe black sapotes not only don’t taste like chocolate, but are quite gag-worthy.  Further, if it’s picked too early, the fruit won’t ever ripen and will simply rot, which one imagines doesn’t improve the flavor over the non-rotted, unripe version.

Picked at the right time, though, the black sapote will ripen within about 3 to 6 days after harvest. When this happens, the formerly white pulp turns a deep brown and develops a distinctive taste that, together with its papaya-like texture, have caused many to compare it to chocolate pudding (hence the nickname, “chocolate pudding fruit.”)

The pulp can be eaten as is (but not the skin), but given that it tastes a lot like chocolate pudding, it’s also commonly used in various recipes as a substitute for chocolate.

If you’ve ever wondered what the “M’s” stand for in one of the world’s favorite chocolate-based candies, M&Ms, wonder no more. In 1941, Forrest Mars Sr., of the Mars candy company, struck a deal with Bruce Murrie, son of famed Hershey president William Murrie,  to develop a hard-shelled candy with chocolate at the center.  Mars needed Hershey’s chocolate because he anticipated there would be a chocolate shortage in the pending war, which turned out to be correct. As such, the deal gave Murrie a 20% stake in the newly developed M&M; this stake was later bought out by Mars when chocolate rationing ended at the end of the war, in 1948. The name thus stood for “Mars & Murrie” the co-creators of the candy.

The color orange was named after the fruit, not the other way around.  Before then, the English speaking world referred to the orange color as geoluhread, which literally translates to “yellow-red.” The word orange itself was introduced to English through the Spanish word “naranja,” which came from the Sanskrit word nāraṅga, which literally means “orange tree.”  The English dropped the leading “n” and eventually we got the word “orange.” In the early 16th century, the word orange gradually started being used to not only refer to the fruit, but also what we now know of as the color orange.

In High School, Major League Baseball star pitcher Justin Verlander traded a small percentage of his eventual $3.12 million signing bonus for a 50 cent chocolate milk. This happened while the future MLB superstar was in the 10th grade at Goochland High School in Virginia.  Short 50 cents needed for a chocolate milk that day, he asked his friend Daniel Hicks for the money. “So I said, ‘How about I give you 0.01% [actually it was .001%] of my pro signing bonus if you give me 50 cents now?’ He found a napkin, wrote it up, and I signed it. I forgot about it, but after I signed [with Detroit], he comes over and whips out this old napkin. I’m like, oh my God! My bonus was 3-point-something million.” That worked out to a little over $3K for the industrious Daniel Hicks who turned 50 cents into $3120 in just about five years, when Verlander signed with Detroit in 2004 out of college for a guaranteed contract of $4.5 million (max $5.6 million) with a signing bonus of $3.12 million.

Explaining the impending chocolate shortage can be difficult, although it appears to be centered around ever-increasing demand. Although today chocolate is not the hit in China that it is in the West (in 2013, average Chinese per capita consumption was 100 g compared with 8 kg in the UK), most forecasters feel that younger generations of Chinese consumers will develop a taste for the commodity. Production has fallen in some places, as well, including Indonesia where the 600,000 annual tonnes they were producing just eight years ago have fallen to 490,000 today. This is blamed on the cocoa pod borer (a type of moth), as well as the age of the trees and disease. However, other countries are seeing an increase in production. The Ivory Coast just put up its largest-ever crop at almost 1.8 million tonnes. Regardless of the reason, with the increase in demand, chocolate has become a hot commodity, so much so that one trader, Anthony Ward, purchased £658 million worth, or 7% of all of the cocoa bean supply at the time, in 2010. Noting his insatiable desire for cocoa, this act earned him the nickname “Chocfinger.”