Soviet Union cosmonaut Alexei Leonov was the first man to walk in space, but he, almost, never came back.

Today I found out that the first man to walk in space almost got stuck out there.

That lucky individual was Alexei Leonov, who was born in the Soviet Union on May 30, 1934. He was one of the twenty Soviet Air Force Pilots to be chosen for the first cosmonaut group. Originally, his historic walk was supposed to have happened on the Vostok 11 mission, but as that was cancelled; it was later performed on the Voskhod 2 mission instead. After eighteen long months of training for the event, Leonov was ready to become the first person to walk in space.

The Voskhod 2 launched on March 18, 1965. In addition to Leonov, Pavel Belyayev was on board to man the ship while Leonov attempted the space walk. It was the first trip into space for both of the crew members.

Once in orbit, Leonov strapped on an EVA (extra-vehicular activity) backpack to his spacesuit. It provided him with just 45 minutes of oxygen, which would allow him to breathe and keep cool; meanwhile, heat, moisture, and carbon dioxide would be vented into space via a relief valve. 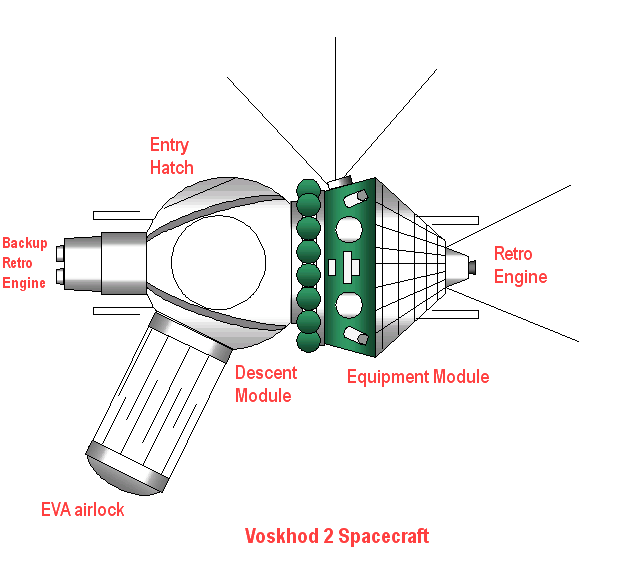 Belyayev pressurized the inflatable airlock, which took seven minutes to fully inflate. Everything went smoothly at first and Leonov spent a total of 12 minutes and 9 seconds out on his space walk. He described the experience by saying he felt “like a seagull with its wings outstretched, soaring high above the Earth.”

Unfortunately, all good things must come to an end, and he needed to get back inside the spacecraft before he ran out of air. But getting back inside proved to be a problem.

He maneuvered himself back to the airlock, but then realized that his suit had become incredibly stiff. Due to the lack of atmospheric pressure, it had bloated with oxygen. His feet and hands had pulled away from his boots and gloves, and he knew it was going to be incredibly difficult to get himself back into the ship safely.

There was only one way to do it: wriggle in head-first while bleeding off the oxygen in his suit.

I knew I might be risking oxygen starvation, but I had no choice. If I did not reenter the craft, within the next 40 minutes my life support would be spent anyway.

Leonov thought about contacting mission control about his predicament and let them know about the risky thing he was about to do, but decided not to. He knew that he was the only one who could do anything about the situation and he didn’t want to worry the people on the ground.

As he released oxygen and exerted himself, his suit began to heat up dangerously with his core body temperature rising 3.2 degrees Fahrenheit (1.8 degrees Celsius), as he slowly clambered into the airlock inch by inch.

Once he was finally in, he had to let even more air out so he could curl his body around to close the hatch, which he eventually accomplished. At last with the hatch sealed, Belyayev was able to pressurize the airlock again and Leonov made it back inside the spacecraft after the heart-stopping few minutes of struggle.

On the ground, people had watched the very first spacewalk, though Leonov’s struggle to get back inside the spacecraft wasn’t televised. At the first sign of trouble, the transmissions shown on televisions on Earth “randomly” stopped with no explanation, with most assuming technical difficulties with the broadcast feed.

Leonov was thankful they didn’t show his re-enty, “My family was therefore spared the anxiety they would have had to endure had they known how close I came to being stranded in space.”

Unfortunately, this was only the start of the problems. Just five minutes before they were scheduled to begin re-entry, the crewmen discovered that the automatic guidance system wasn’t functioning. They would have to land the spacecraft manually and were also dangerously low on fuel to maneuver to boot.

To do the necessary maneuvers, Leonov stated:

Pasha began orienting the craft for reentry. This was no easy task—in order to use the optical device necessary for orientation, he had to lean horizontally across both seats in the spacecraft, while I held him steady in front of the orientation porthole. We then had to maneuver ourselves back into the correct positions in our seats very rapidly so that the spacecraft’s center of gravity was correct during the reentry burn.

The difficulty of the landing was compounded by politics. They had to land on Soviet soil; if they overshot and landed in China, which had very poor relations with Soviet Russia at the time, a potential international incident could have ensued. They also had to choose somewhere without many people. Thus, Leonov chose Perm, a sparsely populated area far from China. It seemed like a safe bet.

However, additional problems started as they entered the Earth’s atmosphere. The craft began spinning uncontrollably.  Why?  The orbital module was still attached to the landing module.  The modules hadn’t fully detached when they were supposed to, due to a thick communication cable connecting the two.

Not only did it throw the landing location off significantly, but the two craft spun around one another, subjecting the cosmonauts to as high as 10 G’s of force.  So much, that Lenov said that the “small blood vessels in our eyes burst”.

At around 62 miles high (100 km), the cable burned up and they were able to stabilize and land successfully… in two meters of snow in Solikamsk on the outskirts of frigid Siberia.

Upon attempting to open the hatch, they further had difficulty after the explosive bolts blew.  Rather than the hatch opening, it was stuck shut:

Looking out of the window, we could see the hatch was jammed against a big birch tree. We had no alternative but to start rocking the hatch violently back and forth, trying to shift it clear of the tree. Then, using all his strength, Pasha managed to push the hatch away from the remains of the bolts, and it slid back and disappeared into the snow.

At this point, Leonov and Belyayev’s families were told that the two had landed safely and were resting before returning to Moscow. However, Soviet officials hadn’t picked up on the rescue signal, and had little idea where they’d landed or even if they were still alive.

Lucky for the cosmonauts, a cargo plane did pick up on the signal and the word of their location spread around.  Initial attempts at rescue were made by civilian aircraft, with helicopter pilots and others throwing the two down supplies, including wolf skin boots and cognac. (Note: contrary to popular belief, drinking alcohol in such a situation would make hypothermia significantly more likely, rather than it heating your body.)

In the end, they ultimately had to spend the night in a place packed with wolves and bears during mating season- when they’re most aggressive- and where the temperature dropped to -22 degrees Fahrenheit (-30 C) according to Leonov. They also had no way to re-seal the landing module, so simply had to hunker down and endure the night.

The temperature problem was compounded by the fact that their suits had sweat sloshing around up to their ankles, along with being soaked through the inner layers.

We had to strip naked, take off our underwear, and wring the moisture out of it. We then had to pour out what liquid had accumulated in our spacesuits. We went on to separate the rigid part of the suit from its softer lining—nine layers of aluminum foil and a synthetic material called dederone—and then put the softer part of the suits back on over our underwear and pull our boots and gloves back on.

The next day, a rescue crew arrived traveling via skis, while another came a day later and chopped down trees, making a log cabin and a huge fire to keep the team and cosmonauts warm.  They then all traveled nine kilometers by ski to a clearing where a helicopter was waiting for them.

Upon arriving in the town of Leninsk, they had one last duty: to report on their mission. Leonov said simply,

Provided with a special suit, man can survive and work in open space. Thank you for your attention.

He didn’t go into detail about his brush with death. It’s possible that he was told not to; details of the harrowing mission weren’t released until much later.

3. The Nightmare of Voskhod 2

This article was previously published in Today I Found Out.