Aurora Station, billed as the “first luxury hotel in space,” may start welcoming guests as early as 2022. 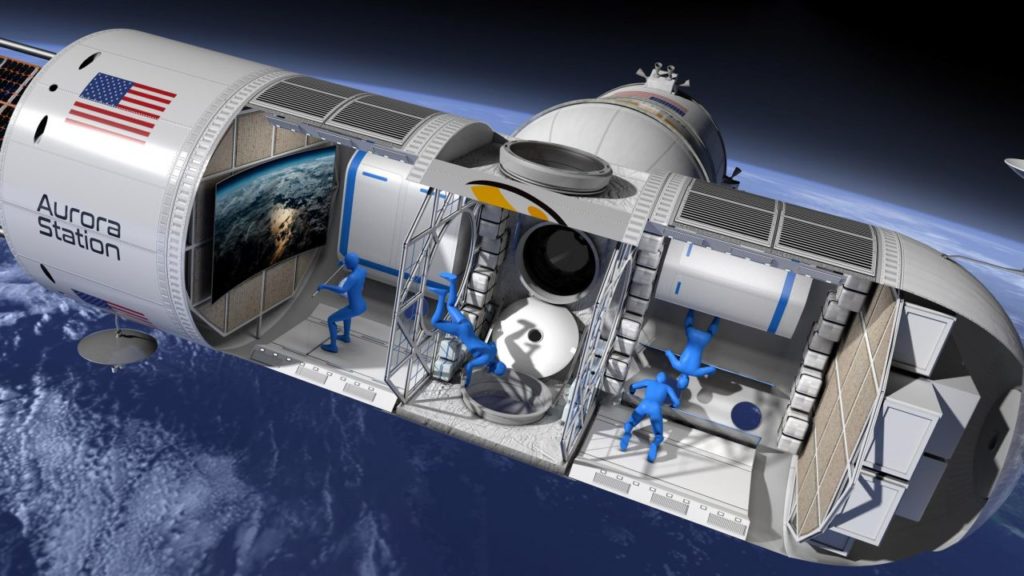 Aboard the International Space Station, an astronaut’s life is typically work, exercise, rest, repeat. But what if your chance of having the right stuff for NASA’s astronaut corps is, to say the least, minimal?

Aurora Station, billed as the “first luxury hotel in space,” may be for you. Houston-based Orion Span Inc. hopes to launch the modular station in late 2021 and welcome its first guests the following year, with two crew members accompanying each excursion. The platform would orbit 200 miles above Earth, offering six guests 384 sunrises and sunsets as they race around the planet for 12 days at incredibly high speeds.

Once, such a thing would have clearly been the stuff of fiction. Now, in the age of SpaceX, Blue Origin, and Virgin Galactic, the idea that a private company would launch an orbiting hotel seems almost pedestrian.

“We want to get people into space because it’s the final frontier for our civilization,” said Orion Span’s founder and chief executive officer, Frank Bunger, a former software engineer. Orion Span’s offering won’t be for everyone, however: Launch and re-entry are not for the faint of heart.

“We’re not selling a hey-let’s-go-to-the-beach equivalent in space,” Bunger said. “We’re selling the experience of being an astronaut. You reckon that there are people who are willing to pay to have that experience.”

Beyond the physical limitations to embarking, there are also the fiscal ones.

The 12-day stay starts at $9.5 million per person, or about $791,666 a night. Aurora Station is planned as a 35-by-14-foot module, or roughly the interior volume of a Gulfstream G550 private jet, according to Bunger. The station would accommodate as many as four guests, plus the two crew. The company requires an $80,000 deposit, which is fully refundable, and began accepting payments on Thursday.

Orion Span is assessing potential funding sources to get the endeavor off the ground, but won’t disclose how much it wants to raise for the project, a spokeswoman said. It reflects the type of commercial venture that’s become more common over the past decade, fueled by decreases in launch costs and an influx of venture capital. Since 2015, startup space companies have attracted $7.9 billion in investment, according to Bryce Space & Technology LLC, a consulting firm.

“The commercialization of LEO (low Earth orbit) is an exciting prospect, but it will be an exercise in determining what ideas are more real than others,” said Phil Larson, a former space policy adviser to President Barack Obama who worked for Elon Musk’s SpaceX, or Space Exploration Technologies Corp. He is now assistant dean and chief of staff at the University of Colorado at Boulder’s College of Engineering and Applied Science.

Orion Span has yet to contract with a launch provider, either for its initial flights to build the station or for customer flights. The startup’s aggressive four-year time frame may be a ploy, Larson said, to assess “what kind of market might be out there for this.” Van Espahbodi, managing partner of Starburst Accelerator LLC, a consulting and venture firm, added that the public-relations push behind Orion Span may be an effective way to help the company attract funding, too.

No word yet on the minibar or turndown service

Orion Span’s chief architect and operating and chief technical officers are former NASA employees. The company said it’s “developed proprietary technology to drive a full order of magnitude of cost out of the design and manufacture of a space station.” Bunger said the firm’s designs would work with most of the current launch configurations, such as Arianespace, SpaceX, and United Launch Alliance. It could also partner with a government space agency, he said.

One reason Orion Span can target a price of less than $10 million per person is because of declining launch prices, Bunger said in an interview. “Everybody’s forecasting that they’re going to fall,” he said. “Almost every week there’s another rocket launch company that’s starting up with a new way to get to orbit cheaper, faster, better.”

Indeed, Orion Span joins a growing list of entrepreneurial firms that see cheaper access to space leading to a demand for more real estate in low Earth orbit. Bigelow Aerospace LLC, founded by lodging billionaire Robert Bigelow, deployed its 8-foot, 3,000-pound inflatable activity module on the ISS in May 2016. In October, NASA extended the two-year service period for the module—which is used for storage—to remain part of the space station until at least 2021.

Axiom Space LLC, a Houston-based company also run by NASA veterans, said it plans to launch habitation modules to complement the ISS. Arizona-based World View Enterprises Inc. is developing a fleet of high-altitude platforms, called stratollites, carried by balloons to the edge of space. The stratollites are used for communications, surveillance, weather forecasting, atmospheric research, and other applications. Last week, World View said it had raised a total of $48.5 million.

But the new world of commercial spaceflight has yet to launch a human into space, let alone civilians and leave them there for two weeks. Prior to launch, Aurora Station travelers would have three months of training, beginning with online courses to understand “basic spaceflight, orbital mechanics, and pressurized environments in space.” Hotel guests will also have required exercises on spacecraft systems and contingency training at the company’s Houston facility.

No word yet on the minibar or turndown service.