The cursed wonders of India

The enraged sage cursed the people and since then the lands of the wonders of India have been deserted. 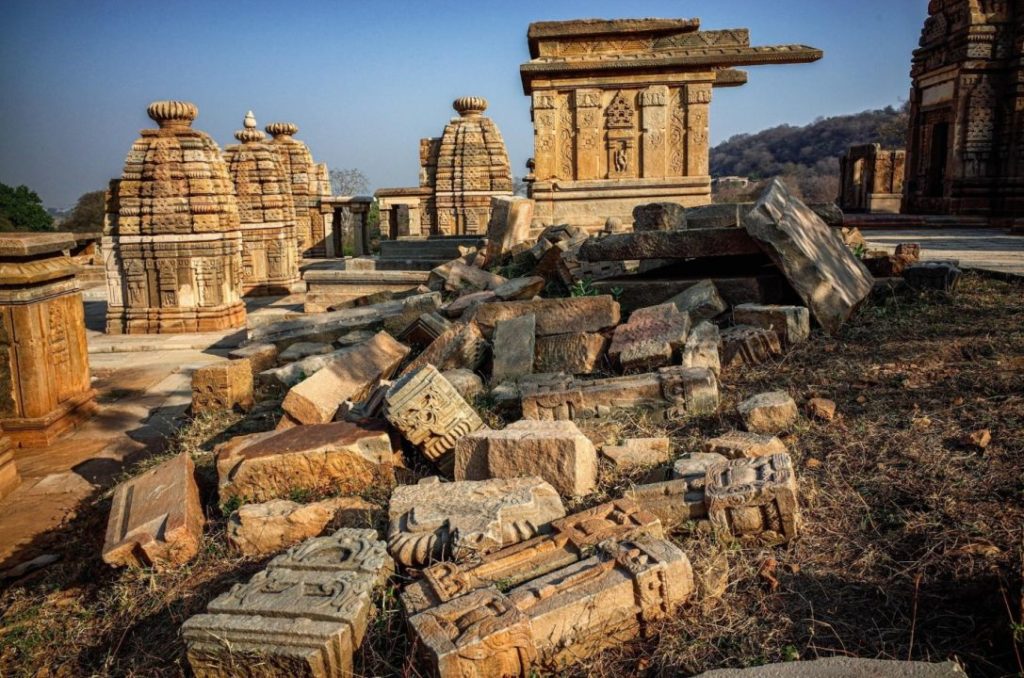 Located near the Indo-Pak border of the Thar desert are the forgotten Kiradu temples of the Chalukya dynasty. The temples, built in the 11th century in the Solanki style, are believed to be cursed. Legend has it that a sage left a disciple in the care of the village of Kiradu but his wishes were not fulfilled. The enraged sage cursed the people and since then the lands have been deserted.

The nearest town, Barmer, is about 35 kilometres away. Once part of a thriving trade route from Kandahar to Kutch, Barmer is a shell of its former glory. However, as always looks can be deceptive. In 2009, crude oil fields were excavated in the district, attracting several big oil companies such as Cairn and ONGC. Today wealth flows like a river across this barren landscape.

The economic boost also incentivised the local populace to explore professions beyond herding and farming. Barmer’s surviving nobility of the Sodha dynasty has chosen to expand into hospitality with a vision to build on the area’s natural diversity of sand-dunes, salt lakes and migratory birds as well as focus on its cultural legacy of Mangniyaar and handmade block-print fabrics. While the temple complex features prominently in their itinerary, its dismal condition is a woeful tale for all.

The structures are officially charged under the care of the Archaeological Survey of India (ASI) and, more recently, the Indian National Trust for Art and Cultural Heritage (INTACH). On paper, funds have been allocated over the years for their restoration. In 2001, the 20 Year Perspective Plan for Sustainable Tourism in Rajasthan report released by the Ministry of Tourism noted that as part of catalysing tourism in Rajasthan Rs 110 lakh had been allocated under the State Plan, and an additional  Rs 50 lakh by Centrally Sponsored Schemes for the development and refurbishment of the Kiradu Temple Complex. The responsibility of this refurbishment was bestowed on ASI. However, even after 18 years, of the estimated 108 temples, only 5 remain. The last time repair work was carried out in the area was in 12th century, under the patronage of the Chalukya ruler Bhima II.

The question about why the complex is in such a ruinous condition despite plentiful funding remains unanswered.  If the matter catches the attention of one of our many vigilant authorities, maybe a Committee will be appointed to investigate the matter. Although, as bureaucratic entanglements go, I suspect the curse of the raging sage is responsible for this neglect.

However, it will be surprising to know that Kiradu’s unfortunate fate is not unique. It is part of a larger narrative of crumbling histories spotting the country. The Mehrauli Archaeological Park in New Delhi, which is home to nearly a hundred monuments of the Sultanates of Delhi is another example. The area, for the most part, is enclosed and has been allocated funds as part of ‘re-development’ projects by the Delhi Development Authority (DDA). Over the past two decades, these projects have, sometimes, solely been lead by DDA, sometimes by the Indian National Trust for Art and Cultural Heritage (INTACH) and even by a public-private partnership of both.

The result of these endeavours? A rose garden, patches of maintained lawns with trails, and iron fencings around the more ‘significant buildings’, but the walls of the said buildings are badly damaged with engraved initials of lovers. Rajon ki Baoli which was once a source of water is now a stinky swamp, and the artistically tiled domes are now blackened. The park itself is hard to find considering there is no signboard to welcome tourists and only seasoned history walk-leaders can take you through the trail.

The sardonic twist in this particular narrative is that several of these monuments fall under the care of ASI – the organization that is also responsible for the Qutub Complex, a UNESCO World Heritage Site, with which the Mehrauli Archaeological Park shares a lengthy boundary wall. Even the dead can’t escape the misfortunes of State control.

The United Kingdom and its solution

A few years ago, the United Kingdom found itself in a similar fix, whereby, several bodies had been formulated to conserve the ‘assets’ of the country. However, the jumble of responsibilities between the various departments was a hindrance to the process. In 1983, the numerous bodies were dissolved and re-constituted under a single commission, the English Heritage. Over the years, the office became responsible for built, material, and archival heritage, and even acquired responsibility for submerged ‘historic wrecks’ 12 miles off the English coast.

By 2010 however, the body was sustaining an annual deficit and the global recession was prompting budget cuts. To ease the burden, in 2015, the English Heritage was converted into a charitable trust of the same name with a government investment of 80 million pounds. While the properties and heritage collections remain under public ownership, the trust now has control over its finances and has considerable autonomy in raising commercial and philanthropic funds. In exchange for the generous investment, the trust has proposed an ambitious eight-year program to convert itself into a self-sustaining institution that acts as an advisory body to the Historic Buildings and Monuments Commission for England.

A solution to the problem

The ASI has a history that pre-dates the Republic of India. Established in 1861, ASI is currently responsible for over 3,650 monuments of ‘national importance’, carries out excavations throughout the country and maintains a total of 44 museums and 7 publications and the National Archives of India. Despite this monumental responsibility, the organisation suffers budget cuts regularly. It is also well-known for being plagued with a paucity of technical staff, manpower, resources, ill-advised transfers, and the usual red-tapism.

However, despite the limitations, the ASI has several achievements. K. Muhammed, former Regional Director (North) of ASI, has several excavations to his credit. Of these, perhaps the most exciting project of all was a set of 200 temples, constructed between 9th to 11th CE by the Gurjara-Pratihara dynasty, that lay waste and were home to the Gadariya dacoits of the Chambal ravines. With no police protection and no guarantee of safety, the ASI team proceeded with the project.

To ensure its success, Muhammed managed to get an audience with Nirbhay Singh Gujjar, the most wanted dacoit of the time who had 205 criminal cases to his name and ran a parallel government in 40 villages. After Gujjar’s death in 2005, Muhammed dealt with the mining mafia encroaching the region and with little police protection. On several occasions, his team was ‘roughened up’ by the mafiosos. Unable to get the concerned authorities to intervene, as a final resort Muhammed wrote to the then RSS Chief K. Sudershan – and it took only 24 hours to get the wheels turning. In January of 2017, the restoration of all 200 temples was successfully completed, all thanks to an unrelenting man and his commitment to history.

It is clear that people care about their history and monuments, however, the mounting bureaucratic paperwork and the subjugation of initiative within this paperwork is a serious hindrance. Autonomy is the need of the hour. However, I do not propose contracting out monuments. The idea is to privatise conservation, to give organisations like ASI and INTACH autonomy to harness the best possible technologies, to hire the right people, to raise philanthropic funds, to foster partnerships with local communities such as the noble house of Sodha and the dacoits of the Chambal valley – all to preserve our many histories, and to do so expeditiously.

The past decade has witnessed the rise of private museums, such as the Kiran Nadar Museum of Art, constructed under the patronage of India’s business elite. In 2007 the Maharana Mewar Charitable Trust led the restoration of the Udaipur City Palace with funding from The Getty Foundation, USA and the Ministry of Culture, GOI. The Palace now houses a museum, a library, and a research institute.

The model we currently have is neither sustainable nor effective. With this structural paradox in mind, it is time for the State to clean house and give motivated players a chance to ameliorate the cursed wonders of India.

Rishika Yadav has completed her post-graduation in International History from the London School of Economics and Political Science (LSE). She has previously worked at UNESCO MGIEP, Indian Council for Cultural Relations (MEA, Govt. of India), and Centre for Civil Society.