The art of being horizontal 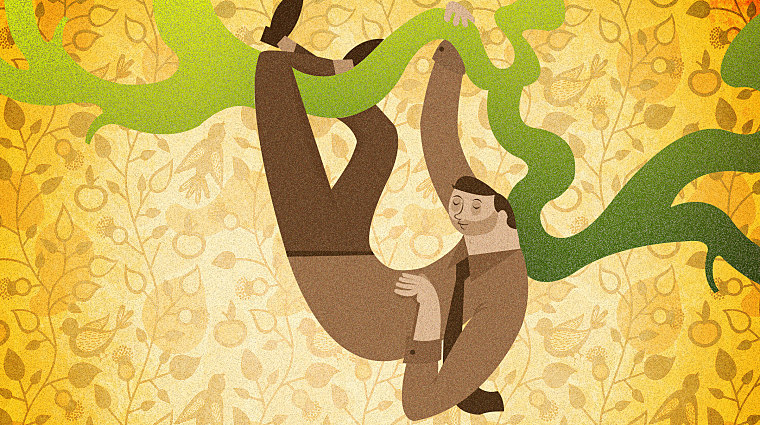 Yes, we can. Never give up. Winners never quit. Quitters never win. Seven ways to success. There is a multi-billion dollar industry built around keeping us on a never-ending treadmill, making sure we carpe diem the hell out of our day.

Well, I think that’s a crock of shit.

A life of leisure and laziness is the only sensible human goal. That’s what Ivan Goncharov tells us in Oblomov and I wholly agree with him. First published in Russia in 1859, this underrated and largely forgotten gem was meant to be a satire of the bourgeoisie – but it speaks straight to my soul.

“Lying down was not for Ilya Ilyich Oblomov either a necessity as it is for a sick or sleepy man, or an occasional need as it is for a person who is tired, or a pleasure as it is for a sluggard: it was his normal state. When he was home – and he was almost always at home – he was lying down, and invariably in the same room which served as bedroom, study and reception-room.”

What a guy! What a life! Give me a chance to be like Oblomov and I will jump at it. Sorry. Not jump. Oblomov would never jump at anything. He would crawl. Or better yet, slowly roll himself over, if and only if, his life depended on it. In the first fifty pages of the book, he barely moves from his bed to his chair. That’s how chill he is.

The art of lying down, or “being horizontal” as we refer to it in the family, has been passed down to me from generations of Bengalis. The long afternoon nap after a heavy lunch of fish curry and rice. The lingering in bed long after you have woken. The idle questions that hang limply in the early evening air. What time is it? Should I get out of bed? Or just hang here a little longer? Should I make the Herculean effort to reach out to the phone beside me? Should I eat a peach?

Ah, the peace that descends on the soul at such times.

Richard Freeman, in his introduction to the book, writes that no human being can ever deny the impulse to do nothing. But yet, laziness “flies so splendidly in the face of all conventional ideas about the purpose of life and has the unsettling, seditious glamour one associates with Hamlet’s self-doubting vengefulness or the comically exaggerated altruism of a Don Quixote. Should human beings be like this?”

The fact is there is a little bit of Oblomov, Walter Mitty and Mungeri Lal in each of us.

To me, the answer is clear. If they can, all humans should be like Oblomov. The goal of all work is to ultimately not work, or what is the point? If you don’t believe me, ask a more intelligent man, Bertrand Russell, who said:

“I want to say, in all seriousness, that a great deal of harm is being done in the modern world by belief in the virtuousness of work, and that the road to happiness and prosperity lies in an organised diminution of work… I hope that, after reading the following pages, the leaders of the YMCA will start a campaign to induce good young men to do nothing. If so, I shall not have lived in vain.”

Those are strong words from a brilliant mind and he argues his case with great precision in his famous essay, In Praise of Idleness.

Taking a cue from Bertrand Russell, I stopped working a regular job when I was in my mid-forties and spent five years writing. I have nothing to show for those years, except a bunch of yellowing screenplays on a dusty shelf, but those were among the happiest days of my life. And most of that time I spent in one room – in the horizontal position.

Imagine if you will, lying on a comfortable couch with your bare feet facing the endless grey ocean. A delirious monsoon breeze blows through the room. You know there will be no doorbells, no phone calls, no clamoring of any kind. It’s half past noon, and you pop a pint of chilled beer. “Ganja Babe” plays softly on the stereo. A simple but delicious home-cooked lunch awaits. And after that you sleep the sleep of gods. Then awake languidly and get back to the messy business of life. But in your own way and in your own pace, until you rise, rinse and repeat. Could there be a better life?

One of the reasons for Oblomov’s laziness and apathy can be traced to his childhood. He was raised in the lap of luxury, with servants attending to his every whim:

“Zakhar (his man-servant) — as his [Oblomov’s] nurse did in the old days — draws on his stockings and puts on his shoes while Ilyusha, already a boy of fourteen, does nothing but lie on his back and put up one foot and then the other; after that Zakhar combs Ilya Ilyich’s hair, helps him on with his coat, carefully putting his arms into the sleeves so as not to incommode him too much, and reminds him that he must do so and so and so and so: on waking up in the morning — to wash himself, etc.”

I was brought up exactly like that till about the age of eight, when I went to boarding school – where of course, nobody did anything for anybody and your ass could be whipped for an unpolished shoe or a misplaced comma.

But I think my formative years as the son of the general manager of a multinational oil company in a small sleepy oil town in Assam did much to make me who I am today. An easy-going, lazy, loner, who day-dreams a lot.

In a seminal essay on the book called What is Oblomovism the critic Nikolai Dubrolyubov gives us a deep insight into Oblomov’s character:

“A normal man always wants to do only what he can do…but Oblomov is not accustomed to doing anything; consequently, he cannot really determine what he can do and what he cannot do – and consequently, he cannot seriously, actively want anything… That is why he is so fond of dreaming and dreads the moment when his dreams may come into contact with reality… In his dreams, he would organize new crusades and would fight, decide the fate of nations, sack towns, show mercy, execute, perform acts of kindness and generosity. Sometimes he would picture himself as a great thinker or artist who is followed by admiring crowds…”

This reminded me so much of myself and of the famous short story about the archetypal day-dreamer The Secret Life of Walter Mitty by James Thurber which was also made into an underwhelming film and was no doubt the inspiration for Mungeri Lal Ke Haseen Sapne.

The fact is there is a little bit of Oblomov, Walter Mitty and Mungeri Lal in each of us. And we should cultivate, not shame, these visceral impulses in our souls that run contrary to how society tells us how to live.

So laze, linger and dream.

We’re all headed to the same place.