With Greta Thunberg inspiring a new wave of youth activism, there’s hope children will save Earth with one of their oldest weapons—class boycott 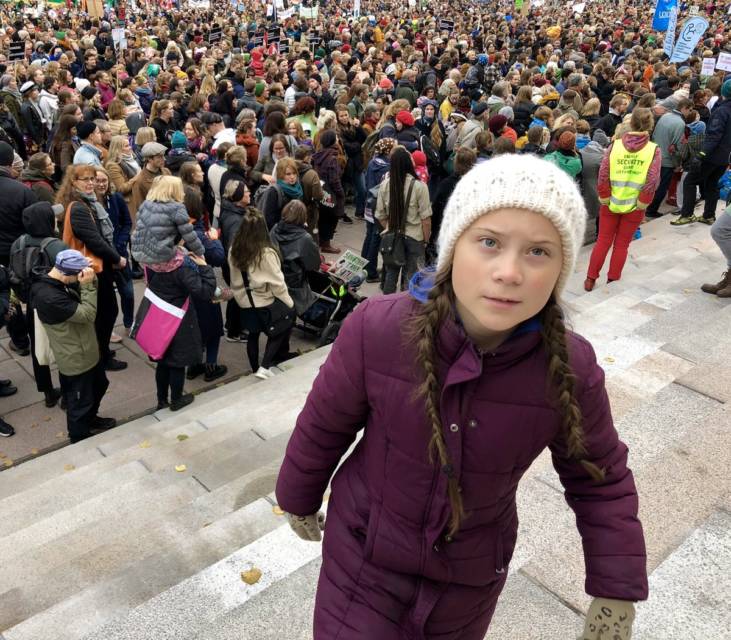 One Swedish girl protesting outside its parliament last year set in motion one of the biggest environmental protests in history on March 15; thousands of young activists in at least 112 countries staged a global walkout, challenging politicians to act against climate change.

Earlier this week, Greta Thunberg, who led the lone protest, became a nominee for the Nobel Peace Prize.

Three Norwegian lawmakers, including Socialist MP Freddy Andre Ovstegard, nominated the 16-year-old climate warrior and activist from Stockholm, who has Asperger’s syndrome, on Thursday for a Nobel Peace Prize.

Students around the world followed her lead on March 15; they showed that climate change needs to move beyond the dull TV debates, recommendations, reports, and summits, and into the streets.

Who is Greta Thunberg?

For those familiar with her activism, this nomination marks a most natural culmination of her crusade; Greta Thunberg has been fighting against policymakers’ reticence to take climate change seriously and address environmental health in their politics.

Her sit-in protest outside the Swedish parliament in 2018, followed by an impassioned address about the peril her generation faces, has since galvanised millions of children to take matters in their own hands. She accused lawmakers of failing to uphold their commitments agreed to under the Paris Climate Accord.

Her prominence has risen rapidly since then—Thunberg has appeared at several international summits; these are events global business elite and politicians debate economic policy at, in blissful ignorance of its impact on climate.

What has she said?

She spoke at the United Nations climate conference COP24 in Poland last December, berating world leaders for behaving like irresponsible children, in an obvious reference to US president Donald Trump who still believes climate change is a hoax. In her speech, she lambasted Prime Minister Narendra Modi as well.

Recently, her scathing remarks at the World Economic Forum 2019 at Davos, Switzerland, went viral. “I don’t want your hope. I want you to panic. I want you to feel the fear I feel every day. And then I want you to act,” she said.

Thunberg is not only a living embodiment of the case against ageism and defeatism but also a grim reminder that we live in a world where children are the ones who recognise an emergency that is neither fake nor avoidable.

Bunking school to save the planet? Check.

“We are the voiceless future of humanity,” activists wrote in a letter published March 1 by the Guardian. “Now, we will make our voices heard. On 15 March, we will protest on every continent.” And protest they did.

Calling it Fridays for Future, students in the UK, the US, Australia, France, Germany, Ireland, Uganda, Thailand, Colombia, Poland, and even in India, have followed Thunberg’s lead, skipping classes to demand stronger action on climate change from their governments. The 16-year-old has asked students to repeat this act of protest every Friday.

This has led to voluble debates on student participation in street demonstrations.

Veterans environmentalists have hailed this as the most exciting, most hopeful development they have witnessed in decades of campaigning and liberal parents are beaming with pride; however, there are a few who don’t know if they should share that enthusiasm.

According to the Guardian, teachers in the UK have grappled with the tension between the law—children must be in school unless there are exceptional circumstances—and the naked truth that this is a “teachable moment”, a learning experience in itself.

As Britain’s sole Green MP Caroline Lucas rightly pointed out, “When David Attenborough is warning that the future of civilisation is at risk, that counts as ‘exceptional circumstances’.”

Thunberg who has become the face of the global climate march welcomed the huge mobilisation. In response to the institutional backlash from conservative politicians and school authorities, Thunberg tweeted, “We hear you. And we don’t care.”

“I think enough people have realised just how absurd the situation is. We are in the middle of the biggest crisis in human history and basically nothing is being done to prevent it. I think what we are seeing is the beginning of great changes and that is very hopeful,” she wrote.

Thunberg also gave a shout-out to her compatriots. “There has been a number of real heroes on school strike, for instance in Scotland and Ireland, for sometime now, namely Holly Gillibrand and the ones in Cork with the epic sign ‘the emperor is naked’,” she told the Guardian.

Gillibrand believes taking time out of school is a powerful weapon. “I say to people who object to us missing lessons, what is the point of studying for a future that, if nothing is done, we might not have?” she said.

In the US, Alexandria Villasenor, Haven Coleman, and Isra Hirsi, daughter of the first-term Rep. Ilhan Omar (D-MN), who was recently in the news for criticising Israel’s Palestine policy, led the March 15 strikes across 100 cities.

“I’m not going to leave my future in the hands of people who aren’t doing anything. We’re already seeing the effects [of climate change], you can see it everywhere. You might even see it in your backyard… We’re just trying to survive,” Coleman told Vice.

Xiuhtezcatl Roske-Martinez, another prominent figure of environmental activism in the US, has been protesting since the age of 6. Now, he’s among the 21 who have sued the federal government and Donald Trump for not acting on climate change.

In India, students streamed out from schools across the country, demanding green governance and a ban on coal. Delhi, Pune, Hyderabad, as well as Bengaluru saw an outpouring of young climate warriors over the day.

Strikers around the world have slightly different demands (including lowering of the voting age); the common theme, however, is that they want their governments to aggressively cut their greenhouse gas emissions.

The United Nations released yet another damning report on Wednesday on the status of terrestrial life; it warns that absence of urgent action to curb climate change will increasingly threaten people’s health.

Scientists warn that the impacts of climate change are already damaging and we have just 12 years to limit that. People aged under 20, of course, could be around to see 2080, and face a planet that has warmed on an average by 2 or even 4 degrees Celsius in their lifetimes.

The most prominent instance of school walkouts in recent history is the rousing call for stronger gun laws after the 2018 Parkland school shooting in Florida, which gave us heroes like Emma Gonzalez, David Hogg, Alex Wind, Jaclyn Corin, and Cameron Kasky. They motivated students across the US to give classes a miss to protest gun control and drive a national conversation. Thunberg herself admits that it inspired her ‘Fridays for Future’ movement.

Young activists around the world have been rising to several occasions and, at times, more effectively than their adult counterparts. Thunberg, for instance, was able to pressure European Commission President Jean-Claude Juncker to commit to spending 1 trillion Euros to mitigate climate change between 2021 and 2027.

There are children activists across gender and sexuality spectrum as well.

The importance of protesting against the marginalisation of LGBT communities from a tender age is not lost on transgender teen Gavin Grimm and teen drag artist Desmond Napoles. Napoles first gained national attention when a video of him during the 2015 NYC Pride Parade went viral; he has been advocating for LGBTQ youth on social media since. He recently started the first drag-house for children.

Grimm’s foray into activism began after he was denied entry into the boys’ restroom at his Virginia high school; he then filed a high-profile lawsuit. Although he lost the legal battle, Grimm has been protesting for transgender rights ever since.

One cannot forget Pakistan’s Malala Yousafzai, the UN ambassador for a girl child’s right to education, who was 14 when the Taliban shot her for asserting her right to go to school.

India, too, has a retinue of young activists but none more prominent than Payal Jangid, who rubbed shoulders with the Obamas and Nobel Peace awardee Kailash Satyarthi by the age of 12.

Jangid escaped child slavery to become a children’s rights advocate. Hailing from Rajasthan, she founded and has been leading her village’s Child Parliament since she was 14. There, she addresses “various issues like lack of separate toilets for girls in schools and the need to stop child marriage”.

Jangid also works tirelessly to advocate the importance of education; she even goes “door to door”, explaining to parents that girls need a supportive environment to grow in. “In our society, education isn’t given much importance, but it is my duty to explain to the older generation how schooling is needed. We formed [the Child Parliament] to speak about the problems faced by our peers and why we need school,” she says.

UAE-based India-origin eco activist Kehkashan Basu founded Green Hope at the age of 12; within four years, she managed several successful environmental projects—cleaning up mangrove swamps and planting 5,000 trees in Colombia, France, Mexico, Nepal, Oman, and the US. In 2016, she was awarded the prestigious International Children’s Peace Prize at The Hague.

How adults can help

Instead of criticising the young generation for being too self-absorbed, disconnected and glued to their cellphones, adults can help them without patronising or co-opting their movement—by spreading the word, showing up to the marches, and believing in them.

Teachers can try to change school policies to enable them to take charge instead of remaining confined to armchair activism. As parents, we can help them to identify policy frameworks to push for, like the Green New Deal.

With Thunberg inspiring this wave of youth activism, there is hope that children will save Earth with one of their oldest weapons—class boycott.