Fugitive billionaire, Nirav Modi, who fled India in 2018, a few weeks before investigation into the Punjab National Bank scam began, has been spotted in London and is reportedly helming a new diamond business. 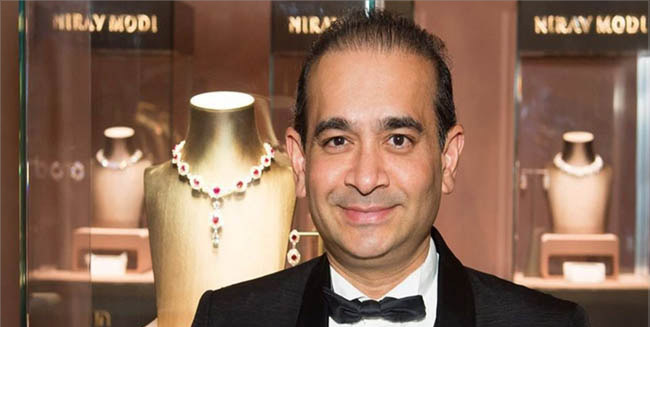 Fugitive billionaire, Nirav Modi, who fled India in 2018, a few weeks before into the Punjab National Bank scam began, has been spotted in London and is reportedly helming a new diamond business.

Wanted in the Rs 13,000 crore fraud in India, UK-based publication The Telegraph tracked him down on Saturday. He is putting up at a luxurious three-bedroom apartment situated in the West End, according to the report, occupying half a floor of the prime Centre Point tower block with “views across London”. The property is likely to be rented at around £17,000 (Rs 15 lakh) while it costs around Rs 73 crore, the report stated.

A video further shows him sporting a Rs 9 lakh-jacket made of “ostrich hide”, walking freely on the streets of London, before answering “no comment” to every question put to him and driving away. Modi refused to divulge how long he intends to stay in England, or if he is still trading in diamonds under a nom de plume, supposedly in the Soho locality.

He has also changed his look—handle bar mustache, long hair, and that jacket which is making waves on social media.

Highly placed sources in the UK government have told The Telegraph that Modi was provided with a ‘National Insurance Number’ by the Department for Work and Pension which allows him to have, access, and trade via online bank accounts in the UK, while still being on a wanted list in India. He is also reported to be in touch with a wealth management company in West London.

Modi’s bank accounts in India were frozen after he was accused of using fake guarantees from Punjab National Bank to secure loans overseas. It is believed he applied for an ILR (Indefinite Leave to Remain) in the United Kingdom almost immediately, allowing him to enjoy asylum despite facing criminal charges like fellow fugitive Vijay Mallya.

Modi allegedly siphoned Rs 6,000 crore, making it the country’s biggest banking scam at over Rs 13,000 crore. Later, the CBI along with the Enforcement Directorate (ED) drew up a separate charge sheet against Choksi in a Mumbai court, alleging that Choksi swindled Rs 7,080.86 crore.

The report has certainly given fresh ammo to the Opposition to target the government just weeks before the general elections.

The Congress tweeted on Saturday after the video of Modi was released, asking why the government was unable to “track down Nirav Modi” when journalists had managed to do so. “Who is [Prime Minister Narendra] Modi trying to protect? Himself, Nirav Modi or the people who let him escape?”

Businessmen flying out of the country, after not repaying creditors and defrauding lenders, have been a big concern for the government that it even framed a new law—Fugitive Economic Offenders Act, 2018—to punish them.

The government has been working to bring Nirav Modi and his uncle-cum-business associate, Mehul Choksi, another accused in the scam who now holds the citizenship of Antigua and Barbuda, to India to be put on trial.

The Ministry of External Affairs in a press briefing on Saturday said it had requested the extradition of fugitive businessman Nirav Modi multiple times, suggesting it knew about its whereabouts, but that the UK had not yet responded. “We have been aware of his presence in the UK”, MEA spokesperson Raveesh Kumar said in response to the video of Modi in London.

Both extradition requests, by the Enforcement Directorate and Central Bureau of Investigation, are being “considered” by the UK government, Kumar said. “You are wrong if you think we are not pursuing Nirav Modi case, just like we were the Vijay Mallya case. We will take all efforts necessary to extradite Nirav Modi.”

Modi and his business partner, Choksi, are wanted in India by several investigating agencies after they colluded to default crores in loans from overseas banks. They availed this enormous credit on the basis of fake guarantees in the form of fraudulent Letters of Undertaking (LoUs) in the name of PNB, India’s second largest public sector bank.

The Nirav Modi Global Diamond Jewellery started in 2010, boasts of 14 stores around the world including in Mumbai, Hong Kong, London, Macau New York. Ever since his first appearance on the Forbes billionaire list, Modi has been under the radar of law enforcement agencies, including the CBI, Enforcement Directorate (ED), and the tax department for alleged illegal transactions and frauds, for siphoning and laundering money through Dubai shell accounts, personal loans gifts.

Speaking of the liquor baron, Mallya too has sought political asylum in the UK since and is engaged in a trial at a UK magistrate court to overturn the extradition request against him.

In June 2018, Nirav Modi reportedly from London to Brussels using an Indian passport via rail rather than air travel in order to avoid authorities. This proves the existence of multiple passports since his official passport had been revoked on February 24. Meanwhile, Choksi surrendered his passport a few months ago.

The red corner notice has hardly affected Modi’s business ventures, which he carried out through these shell companies allegedly floated by his father and associates. It has reportedly been equally hard for the Indian government, which has promised and sought global cooperation to apprehend financial criminals and exchange information on such fugitives. Despite it, countries from Barbuda to Britain seem reluctant to process extradition requests on a timely basis.

Meanwhile, rising number of fugitive economic offenders, coupled with growing economic disparity and a falling rupee, has become one of the flashpoints for the Narendra Modi government which seeks re-election this summer.