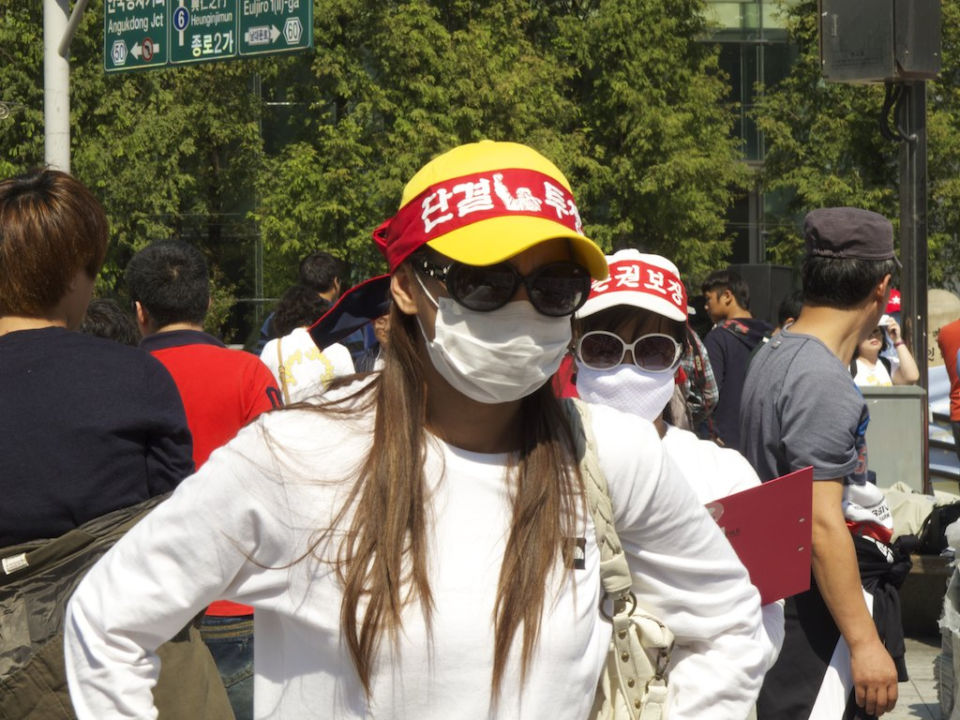 History in the making. More than 20,000 South Korean women angrily urged the gov't to crack down on the widespread 'molka' (spy cam) crimes that secretly film women at public toilet/public transport/office/school- in the biggest-ever protest held by women in the nation. #혜화시위 pic.twitter.com/AYJbLAG8Ut

“The atmosphere was intense,” MS. Lee, a female protestor who attended the rally told us. “We were so excited to be together fighting for justice for all women in South Korea but we were faced with men filming and streaming us on YouTube whilst cursing at us on the spot.”

#Spycams are everywhere in Korea – so easy to install. Here are a few examples. So easy for a guy to look up a girl's skirt in subway as cams can be inserted inside shoes… #혜화시위 FYI men also spy on other MEN, especially at urinals and changing rooms. We live in a sick world pic.twitter.com/DDWLAJ0m8q

It’s become normal protocol for women in South Korea to check the bathroom cubicle thoroughly before use by filling small suspicious holes in the wall with tissue paper or something suffice. But since some hidden filming devices are sometimes too small to see at first glance.

According to a report by Quartz, women are using “Molka emergency kits” which includes a mask, to protect a women’s identity, a screwdriver to break a camera, stickers to cover a camera lens, and silicone gel to fill in small holes.

The anti-spy kit has been available to purchase for 10,000 won to 20,000 won ($8 to $17) since February on Tumblbug, a crowdfunding website. It was originally set up after a woman saw a man leaving a public female bathroom and feared he had placed spycam devices to secretly film women.

There are also all-women teams of officials — originally established in 1987 to fight pickpockets and subway crimes — who patrol public restrooms looking for hidden cameras.

The all-female squad are at the forefront of the molka battle as they search for hidden cameras in public bathrooms using metal detectors around toilets, doorknobs, and even in the walls.

Hardware aside, the battle against these types of violations are being stymied by the way laws are set up. Even if an offender is caught red-handed, it’s still extremely difficult to prosecute the criminal.

Currently the law in South Korea outlines that any photographs or recorded footage secretly captured in public must be of a sexual nature or humiliation to be considered criminal and worthy of a fine or a prison sentence.

If an offender has been proven guilty, they can face a fine of up to $8,858 or a prison sentence of up to five years. This punishment should be enough to prevent this crime from growing at its current rapid speed but only 3% of reported spycam offenders were detained in 2016, according to police statistics.

In response to protests happening, the South Korean government responded by requiring dedicated monitoring teams to be at public transportation centers.

Since May, the South Korean feminist group, Women March for Justice, have held three protests to call attention to the ever-growing spycam issue but to ultimately demand action to be made by the government.

On May 19, March for Justice’s first protest, at least 12,000 women joined in to combat the growing crime. Their online group now has over 42,220 loyal members and is growing everyday.

This highlighted further issues, as the organizers received complaints from male reporters explaining how they don’t have any female camera operators and South Korea’s police force has male officers outnumbering female officers by 9:1.

Since the protest, the government have ordered squads to monitor spycams in transportation centers — like airports and public transport stations. According to the Korea Herald, these teams will search public restrooms for secretly installed filming equipment at least once a day.

Once a public bathroom has been monitored completely and consistently for a significant amount of time, it will be designated as a  “clean zone” for women to use without the worry of them being filmed for a sexual purpose.

This new government measure is compulsory to all transportation stations and if they fail to comply they will be faced with a fine.

This measure is only the latest in a series of attempts the government has made to curb the problem. Earlier they’ve tried various initiatives and campaigns, with little to no improvement so far.

In fact, illegal filming was criminalized over a decade ago in South Korea. Since then, the number of reported molka crimes has increased from 1,535 cases in 2011 to 6,465 cases in 2017, according to government data.

Cara Curtis is an author at The Next Web.