Scotland secure first ever win over England in a one-day international: all you need to know 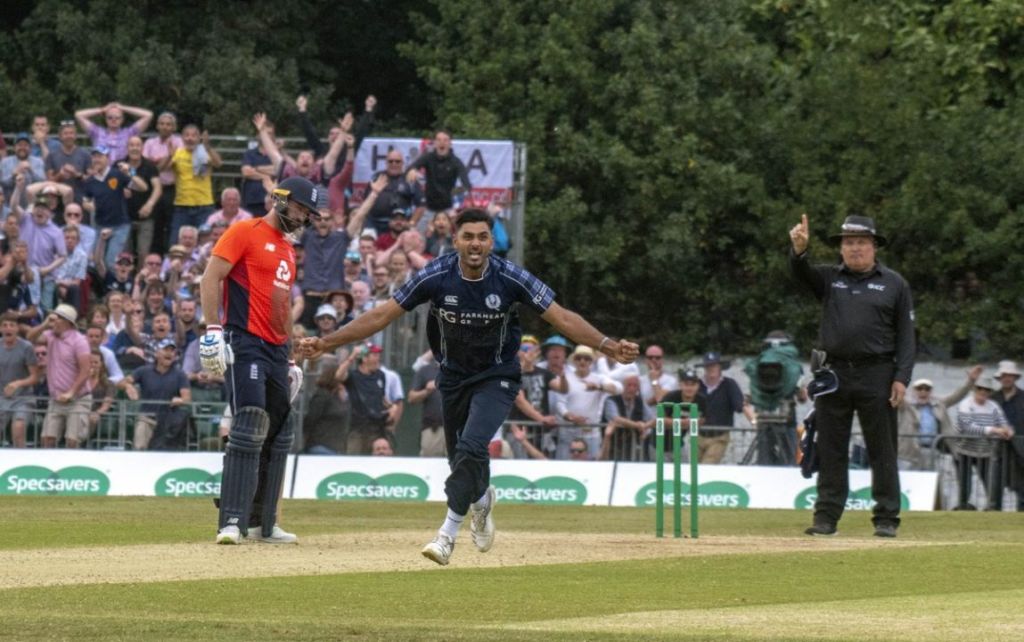 Scotland defeated England by six runs in a historic victory in a one-day international (ODI) match held in Edinburgh.

Scotland’s Callum MacLeod’s 140 not out led the team to a 371-5 victory. England started strong and seemed confident of reaching the target courtesy of Jonny Bairstow’s 54-ball century. However, they slipped from 220-2 to 276-7 rapidly. Liam Plunkett and Moeen Ali tried to keep the guests in the game, but Safyaan Sharif’s dismissal of Mark Wood sealed the victory for Scotland.

With an unbeaten score of 140, Calum MacLeod was ecstatic after the win,”It was a lovely feeling and nice to do it in a crowd this big. Anything above 350 is a big total,” he told ABC News.

Scotland’s Kyle Coetzer (58) and Matthew Cross (48) began the innings on a confident note with an opening partnership of 103 runs. George Munsey added another 55 runs. Scotland’s inning’s included 45 fours and eight sixes. With bowling figures of 3 for 55, spinner Mark Watt boosted the team’s performance.

England looked confident when they came in to bat, and Bairstow’s century bolstered their confidence, however, soon after Jason Roy (34), Eoin Morgan (20), and Alex Hales (52) were dismissed over careless shots.

Through this victory, Scotland has solidified their track record of improvement since the 2015 World Cup. The International Cricket Council only denied Scotland a place in the 2019 Cup as the rain stopped their qualifying match against West Indies in March. More importantly, Scotland may have shed its tag of being “minnows,” and the win will be counted among the major upsets in the gentleman’s game.

Prior to the 1983 World Cup, hardly anyone thought that India could make the knockout stage. Surpassing the knockouts, India made its way to the final against a domineering West Indies.

In their first ever final, India batted first and lost Sunil Gavaskar early. In 54 overs, India managed to get 183 runs on board. When Vivian Richards was at the crease, it seemed as though the Windies would reach the target in 35 overs. Indian captain Kapil Dev, however, pulled off a sensational catch, and that marked India’s resurgence in the game.

Thereafter, Indian bowlers picked up major wickets and brought to the pitch a complete turnaround.  After the dismissal of Michael Holding, India defeated the West Indies to clinch its first ever World Cup victory. The win was nothing less than a miracle for India.

The support of fans can be immensely inspirational in any sport, and it certainly was the case when Kenya hosted Sri Lanka in a group stage World Cup match in 2003. Kenya managed to get 210 runs in 50 overs. Spurred by a decent home crowd, the Kenyans gave their all in the match and chased every ball. Off-spinner Collins Obuya’s 5 for 24 helped the Kenyans stage a 53-run victory over the Lankans.

In this 2011 World Cup match, England went into the match confidently and scored 327 runs. England was looking comfortable when Ireland’s score was 111 for 5, but Kevin O’Brien and Alan Cusack had other plans. O’Brien’s and Cusack’s 162 run partnership tilted the game in Ireland’s favour and they won the match stated to be one of the greatest comebacks of all time.

The Irish were involved in another upset in 2015. Bowling first, Ireland reduced the West Indies to just 87 for 5. However, the Windies made a comeback and posted 304 on board. Ireland looked confident from the start and were 273 for 3. After a temporary jolt, Ireland managed to score 307 and win the match with 25 balls to spare.