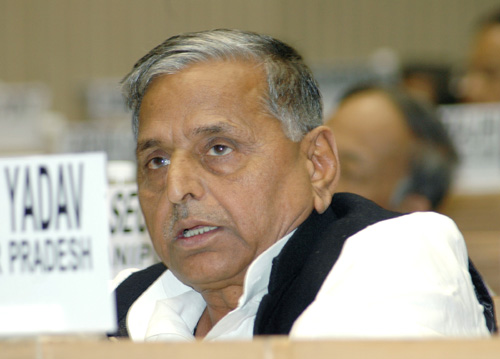 According to media reports, the ailing founder of the Samajwadi Party, Mulayam Singh Yadav, passed away at a Gurugram hospital today.

Mr. Yadav was admitted to Medanta Hospital in Gurugram in August and was moved to the ICU on October 2 after his health deteriorated.

‘Mulayam Singh Yadav is no more between us. He was the centre of UP politics for 5 decades and played a very important role in the politics of the country. I pay my deepest condolences to the family members and their supporters. May his soul rest in peace’ wrote UP CM Yogi Adityanath.

Born on November 22, 1939, Mr. Yadav was elected to the State Assembly in 1967. During his second term as MLA, then-Prime Minister Indira Gandhi declared the Emergency which saw many opposition leaders, including Mr. Yadav go to jail.

Mulayam Singh was elected 10 times as an MLA and seven times as Lok Sabha MP. For a while, he was even seen as a candidate for Prime Minister and was known by close associates as ‘Netaji.’

A former wrestler who found his moorings in the socialist movement, Mr. Yadav rose to become an iconic figure who devoted his energy to the upliftment of the poor.

The three-time former CM of the country’s largest state, Mr. Yadav was an astute politician and seasoned campaigner, from an era that is slowly fading away from Indian politics.

UP Chief Minister Adityanath announced a three-day state mourning in the state, along with a state funeral for the former CM.

With his son Akhilesh leading the party he founded since 2017, Mr. Yadav had been away from the limelight in his final years, but his influence was intact in UP politics.

‘Mulayam Singh Yadav’s death pains me; he was a remarkable personality and was widely admired as a humble and grounded leader’ Prime Minister Narendra Modi paid tribute.

‘He was a remarkable personality, widely admired as a humble and grounded leader,’ the PM added.

In 2019, Mulayam Singh praised PM Modi in Parliament, even wishing for his return as Prime Minister after the national election, leading to a lot of talk.

Mr. Yadav’s long career was not without its fair share of controversy. In 2014, in the run-up to elections in the state, Samajwadi Party leader Mulayam Singh Yadav opposed capital punishment for rape, saying ‘ladke ladke hain, galti ho jati hai (boys will be boys, mistakes can be made).

In another sign of tone-deafness for a senior politician, in 2012, while objecting to the Women’s Reservation Bill, Mr. Yadav is said to have claimed it would be of no use to ‘women from rural areas.’

‘Bade ghar ki ladkiyan aur mahilaaon ko fayda milega. Humari gaon ki gareeb mahilaaon ko nahin. Akarshak nahi hoti… bas itna kahoonga, zyada nahi (The Women’s Reservation Bill will only benefit rich and urban women. Our poor and rural women are not attractive… I will not say beyond this),’ he is alleged to have said at a gathering in Barabanki.