Rock and roll and nuclear weapons

How the Cold War shaped Little Richard, rock and roll legend who passed away aged 87. 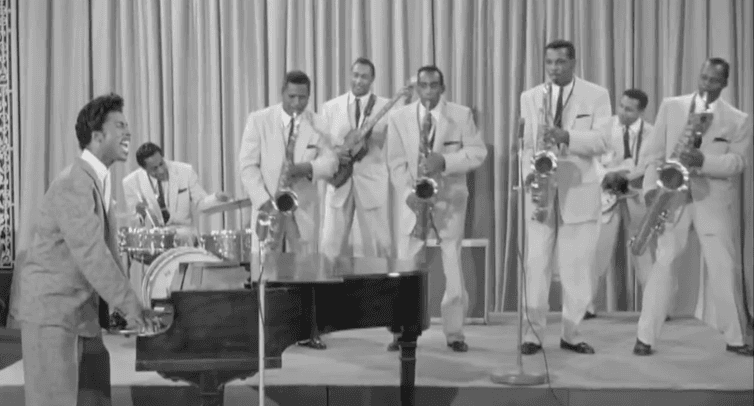 When he landed in Australia in October 1957, Little Richard should have been on top of the world. In just two years, the wild showman had traded the chitlin’ circuit for an international audience. Instead, he was pondering his future – and reading the Bible.

A fast-talking American entrepreneur named Lee Gordon had organised the two-week package tour, which also included Gene Vincent and the Blue Caps, Eddie Cochran, and “the female Elvis” Alis Lesley. When the Blue Caps got stuck in Hawaii, the Sydney-based Dee Jays filled in – on the condition that their singer, a 21-year-old unknown named Johnny O’Keefe, could also do a few numbers.

“R. and R. may never come to Australia,” journalist Bernard Fletcher wrote the previous year, “but then, on the other hand, juvenile crazes have a habit of spreading.”

And spread it had. “[Rock and roll] is so far just a pleasant form of musical novelty to our youngsters,” one Perth journalist wrote in 1956, “and it is hoped it never reaches the hysterical, violent stage that is shocking America.”

“Hundreds of screaming teenagers fought with each other to souvenir a shirt, tie, belt, socks and three sets of underwear which Little Richard stripped off and threw to them”, went the review in The Age. The singer finished in only a green turban and loose-fitting pyjama pants.

(Commentators were more bemused than alarmed: the Melbourne Herald called the stunt “an amusing and quite decent strip tease”.)

But it was the violence of the outside world that was troubling the singer: an exploitative recording industry, racialised violence of white supremacy in the US, and the looming threat of nuclear armageddon.

This final apocalyptic possibility proved too much for Little Richard’s fragile psyche. Already on edge with Great Britain conducting nuclear weapon tests at Maralinga in South Australia, the Soviets’ surprise satellite launch shook the singer. Here is what the consummate fabulist, who never failed to embellish a story, told biographer Charles White:

On our fifth date of the two-week tour […] forty thousand people came to see me at the municipal outdoor arena. That night Russia sent off that very first Sputnik. It looked as though the big ball of fire came directly over the stadium about two or three hundred feet above our heads. It shook my mind. It really shook my mind. I got up from the piano and said, “This is it. I am through. I am leaving show business to go back to God.”

The next day, Little Richard confirmed his conversion by throwing thousands of dollars’ worth of jewellery from the Stockton Ferry into the Hunter River. Cutting short the tour, he flew home to enrol in a theology program at Oakwood College in Huntsville, Alabama.

“I’m quitting showbiz, I wanna go straight,” the now Reverend Richard Penniman sang in 1960. “I wanna serve my Lord before it’s too late.”

As critic Ainslie Baker bemoaned in The Australian Women’s Weekly: “Little Richard was in great vogue among the rock-‘n-rolling fraternity until he retired to ponder upon the threat to the future of man posed by the nuclear age.”

While he returned to secular music in 1962, he never again visited Australia.

True or not (and the singer told many different versions of this episode), this story suggests we look closer at music’s often forgotten Cold War context.

Prosperity has built up financial security for them and their families, so they do not want. At the same time, they hear all the talk of world insecurity. Of psychiatry and psychology, of atomic warfare in abeyance. In the back of their minds, like an uncomfortable dream, is the inkling that living-for-today may be a wise course to follow.

This anxiety about young people and their place in an uncertain world travelled across the globe right alongside the big beat. And the stakes couldn’t be higher.

“During the past few years we have had numerous reports of bodgie activities in our larger cities,” one reader wrote in to Australian Women’s Day from Sunshine, Victoria in 1958.

“It’s not a matter to be pushed aside, either. After all, today’s youth will run tomorrow’s world.”

Many tributes to the late singer have included the curious saga of the rock ’n’ roll pioneer’s abrupt, if ultimately brief, retirement in Australia. His five-year departure for the gospel wilderness is not, however, merely a bit of trivia.

If today we can still hear a transgressive, liberatory power in Little Richard’s voice, we should also remember the political context that made that voice meaningful in the first place.

Rock ‘n’ roll mattered precisely because of the kind of world its young listeners inhabited – a world that frightened some of its most famous singers, too.

Nicholas Tochka, Head of Musicology and Ethnomusicology, University of Melbourne