Review: Blackmail and the monster in every aam aadmi

Irrfan Khan’s Blackmail taps something very accurate about the monsters that reside in all of us – a part that we’re happy to deny. 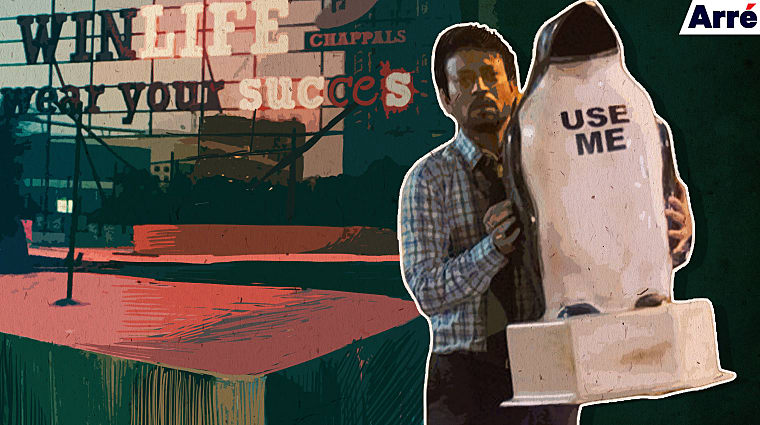 Irrfan Khan’s Blackmail taps something very accurate about the monsters that reside in all of us – a part that we’re happy to deny. All that the film needed, was to be a bit more brutal in the assessment of its evil lead.

There’s an important scene in Abhinay Deo’s Blackmail that sets the tone for the rest of the messy revenge comedy suffering from an acute Delhi Belly hangover. While drinking after work at a neon-lit dive bar, a lascivious Anand sits stupefied after listening to his colleague Dev’s (Irrfan Khan) plan of blackmailing his wife’s lover instead of confronting her about cheating on him. As Dev disguises his risky revenge plot as a joke, Anand foreshadows the former’s fate by warning him that in the movies, it’s normal people like Dev who eventually turn out to be serial killers.

Dev’s immediate reaction to his colleague’s gloomy prognosis is unbridled laughter. After all, how much havoc can a meek, middle-aged, and married employee of a toilet paper manufacturing company like him cause? Turns out, a lot, if the bloated 139-minute-long runtime of Blackmail is any indication.

But at the heart of it remains an interesting premise – the monster within ordinary people and how little it takes to unleash him.

In the film, Dev sets off on a series of misadventures that cause a callous loss of lives, relationships, company profits, and most importantly, trust. Madness is not be the preserve of the deranged, Blackmail attempts to tell us through the actions of its perfectly capable, “normal” protagonists. Dev, for instance, is the quintessential loser, crumbling silently under the pressure of multiple EMIs, an unfairly low salary, and a dead marriage with a wife who says that he “looks like a husband”. Living in a crampy, carton-sized quarter with his wife Reena (Kirti Kulhari wasted in a thankless role, yet again), Dev is one of those guys who seems like he is born with a coating of mediocrity and destined to get lost in the crowd.

In this scenario, the comical empathy for Dev ensures that Blackmail comes across as an unconvincing black comedy bent on milking the Delhi Belly success formula.

And, yet it doesn’t take this harmless man more than a few hours to reveal his inherently dark side and adopt the identity of a blackmailer, the heartlessness of a hardened criminal, and the indifference of a murderer.

Even though Deo tries hard to justify Dev’s criminal bent of mind as a means for survival of the “aam aadmi”, a victim of his own circumstances (he blackmails for a ransom as meagre as ₹1 lakh only to pay off his debts), his amoral tendencies are actually an extension of his personality. Just because he is a mature adult doesn’t mean he is incapable of being tempted by greed and resorting to utter evil. All that Dev’s calculated normalcy needed was an able nemesis and his wife’s infidelity affords him precisely that opportunity.

As he continues committing crime after crime, coercing multiple ransoms from his wife and her lover, stealing photos of his boss’s and colleague’s wives to pleasure himself in the bathroom, and framing innocent people, it is clear that Dev’s controlled calmness can only be the work of a cold-blooded killer.

By showing how easy it is for perfectly sane individuals to willingly prey on the fear of others, Blackmail taps something very accurate about the monsters that reside in all of us; a part that we’re happy to deny. But one that is accomplished enough to cause widespread damage. Like Dev, the film’s other protagonists fall prey to their greed – Reena’s lover Ranjit (Arunoday Singh in top form) blackmails her in return, while Dev’s newest colleague Prabha also doesn’t shy away from demanding her share of the pie.

In this scenario, the comical empathy for Dev ensures that Blackmail comes across as an unconvincing black comedy bent on milking the Delhi Belly success formula (there’s even a senior called Boss DK). Instead of empathy, all the film needed was a little more clarity – it needed to be a bit more brutal in its assessment of its evil lead.

It could have been an unflinching portrait of an individual’s breakdown into his inner monster like Nikki Singh’s (Akshay Oberoi) in Gurgaon when he watches silently as his adopted sister drowns in front of him. Or, it could have assumed the grammar of Anurag Kashyap’s Ugly, where redemption is a road banned for its protagonists. But most importantly, Blackmail could have been a film that shows the epicentre of repressed rage that makes vindictive monsters out of the best of us.