Ranbir Kapoor has come to be the validation for millennial angst in all its glory. But it’s now time to make a big-boy decision: To man-child or not to man-child. 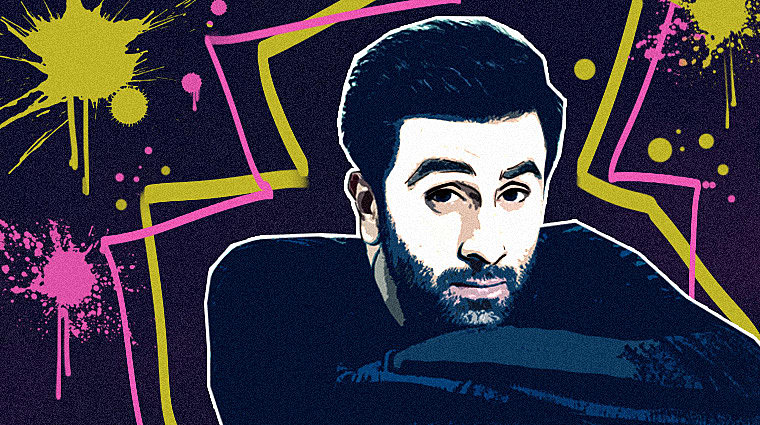 Indian newborns are born with two umbilical cords. The first is the one that feeds your body, the one that the doctor snips the moment he declares either “Dahej aayega” or “Dahej jaayega”, when he separates you and Maa. Then there is the other one that links you to another maa, a far bigger force that stays with you well into adulthood. This is our cine-maa, food for our hungry souls.

It’s been roughly a hundred years since cinema has been performing the diligent duty of representing every generation through the gaze of celluloid. If you’ve grown up singing “Iktara” on road trips, spent heartbreaks obsessing over “Channa Mereya”, or left the cacophony of your corporate cage to explore the “real” with the soundtrack of Rockstar playing in your head… then like many around us, you have only Ranbir “Jo Pakistanis ke saath cigarette peeta hai” Kapoor to blame.

Ranbir Kapoor has come to be the validation for millennial angst in all its glory. We are a generation that is at odds with its own bearings, or what I call the “traffic jam generation”. A people in transit, who sit in a stationary self-contained box clinging on to relationships virtually, seeing everything through the rear-view mirror, and seeing one’s reflection on another’s windscreen. Like most fish in the millennial sea, we don’t know where we’re going but we’re forgetting how to swim with every stroke, which is why we warmly welcomed Ranbir Kapoor into our world when he first learnt to make an egg in the climax of Wake Up Sid. An egg.

Over the last decade, Ranbir has done a great job of representing us in our “trying to peek within by looking ahead and behind at the same time” avatars. The Veds, Jordans, Bunnys, and Sids of the Ranbir Kapoor universe have occupied the same space in Bolly-discourse as the uninventive, yet staggeringly popular, “sex symbol” tag that we bestow on one woman after another. We are a generation constantly trying to come of age through Ranbir Kapoor’s characters. And it’s not such a bad thing.

After all, Ranbir has made many an uncool thing cool with every new iteration of the man-child character he embodies.

From crying openly while making disconsolate exits from weddings to carrying a camera on a monopod through the streets of Rome, every young launda from Nizamuddin to Naples has vowed to follow in his footsteps. This has led to skyrocketing sales of DSLR cameras in the country. As upper- and middle-class parents from Wake Up Sid, Ye Jawani Hai Deewani, and Tamasha woke up to the fact that there is a dimension of reality that extends beyond the hegemony of coaching centres and MBAs, so did ours. One was suddenly not bound by external pressures from family or society but by the limits of one’s imagination and ability. Photography or music as career choices are not frowned upon anymore. “Yeh toh pichhli Ranbir ki film mein tha na? Toh theek hi hoga.”

But there is a downside to this ambition that Ranbir hard-sold all of us. Every film that the man-child launches into a self-actualisation drive, was built upon squashing over the female lead. Her role is relegated to helping the man-child realise that he must grow up (Wake Up Sid), be the catalyst in that change (Tamasha), or put him on a path of self-discovery even after he’s found himself (Rockstar). In Tamasha, Deepika Padukone redeems Ranbir, but throughout this epic journey meandering through the imprints left by Imtiaz Ali for himself, we learn nothing about what she does, what she feels when she’s not busy crying over him, or what happened to her as our hero spirals into his own journey of self-discovery. She is waiting, just like all of us, for Ranbir Kapoor to finally sing a Pritam song with the word “khuda” appended to a “pyaar”, “mohabbat”, “junoon”, or “uns”. Deepika waits, Imtiaz waits, and all of us wait for Ranbir to grow up.

In Wake Up Sid, the role of Ranbir’s female lead is relegated to helping the man-child realize that he must grow up.

In his defence, Ranbir did try to grow up a couple of times. Rocket Singh Salesman of the Year, remains one of his most underrated films: A very honest portrayal of angst, ambition, and achievement strewn into the life of an everyman character who doesn’t merely crack smart one-liners or maintain a godawful scrapbook that lists every major city in the world. But one that deals humanly with ethical roadblocks and comes to terms with being of average intelligence.

But we didn’t like this grown-up version of Ranbir. The movie tanked. We seem to prefer his simplistic thumb-sucking-universe-smacking characters. It is astonishingly easy to watch them on screen and believe that their success is the alternate turn your life could also take. For a few happy hours, we can cheer Ranbir’s rebellion against society’s mores, but are more than happy to fall in line with the banality of our lives as soon as the end credits roll. We have always gone for the low-hanging fruit. That’s why we find our ambition restricted to DSLR cameras and trips to Europe, which is missing the trees for the woods. And that is why we don’t let Ranbir Kapoor grow up.

The decision to “man-child or not to man-child” rests solely with Ranbir, but it would be nice if he did the latter.

But to traverse the path to “legend-hood” like the Sachins, Amitabhs, and Rahmans of the world, the familiar challenge that all of them have faced has come to visit Ranbir. The old recipe for success might not work anymore.

Whether he will continue to inspire dozens of young adults to ride in open-top trucks with a camera fashionably slung around their necks, their earphones blasting “Ilaahi”, or take us into more mature territory, he must decide. The decision to “man-child or not to man-child” rests solely with him, but it would be nice if he did the latter.

As a generation we need to understand that the everyday cannot be escaped with a flight to Europe, “Kabira”, and a tattoo. So for our sake more than yours, Ranbir Kapoor, please just grow up.