The campaign was initiated by Insaaf Camp, an organization that runs legal awareness workshops and camps on the ground. It is the project of a non-profit organisation, Courting the Law which is an online legal guidance portal. Pakistan ranks in the bottom tier in the category of the civil justice system. A 2017 World Justice Project survey conducted in collaboration with Gallup Pakistan, states that confidence in the judicial system is very low among Pakistanis and the state-supported court system fails to handle even the small fractions of disputes that do come to it for resolution. However, a social media campaign featuring the hashtag #QanoonSabKayLiye (Law for All) aims to change the situation by increasing legal literacy in Pakistan.

The campaign was initiated by Insaaf Camp, an organization that runs legal awareness workshops and camps on the ground. It is the project of a non-profit organisation, Courting the Law which is an online legal guidance portal.The #QanoonSabKayLiye campaign is actually a series of Facebook and Twitter posts that explain the rights and obligations of the citizens under the Constitution of Pakistan. Laws related to marriage, sexual harassment, traffic, corruption etc are included in the campaign. 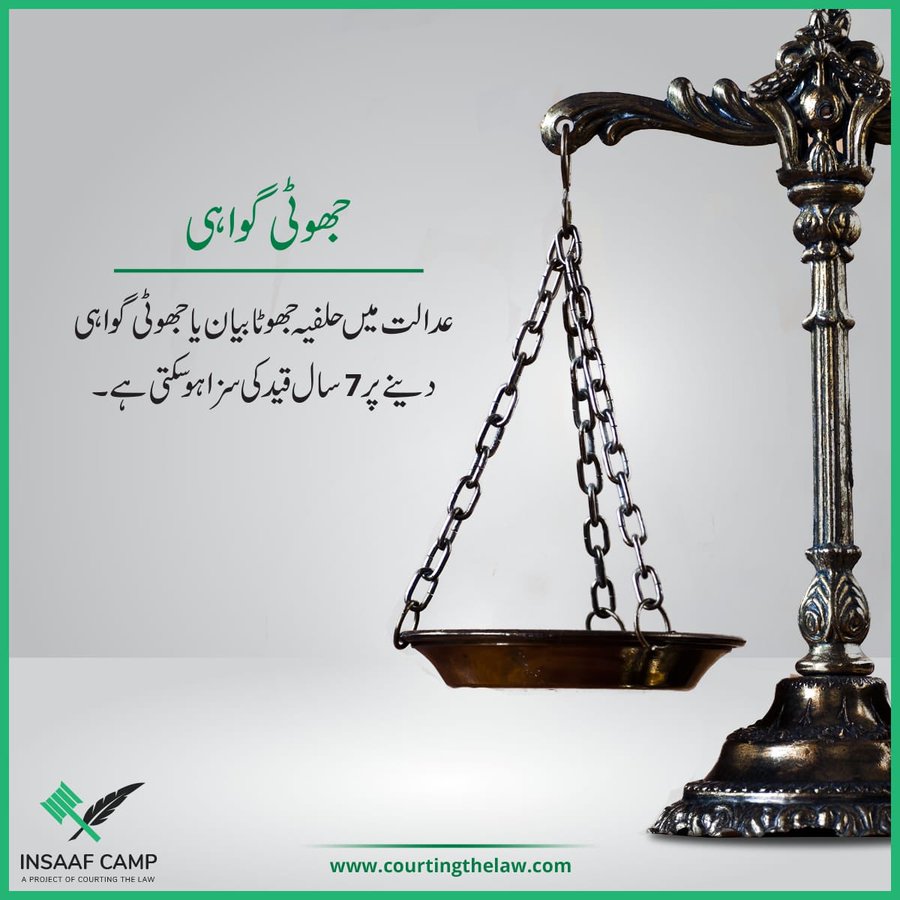 Giving false evidence intentionally in any stage of a judicial proceeding is an offence, punishable with imprisonment which may extend to 7 years and fine. (Section 193 of the Pakistan Penal Code)#QanoonSabKayLiye #CourtingTheLaw #InsaafCamp #KnowTheLaw #Pakistan Global Voices talked to Farhan Shafi, Co-Founder of Insaaf Camp about their#QanoonSabKayLiye campaign. According to Shafi:

Our aim is to increase access to justice and spread legal awareness in Pakistan and to disseminate legal knowledge. Our idea was to post about law in a way a common person can easily understand. We wanted them to know what obligations they have under law and what rights are to be protected by the state. For this purpose, we post both in Urdu and English to avoid any language barriers.

We want our posts to reach more people in rural areas and we have been successful in that, so far. Urban developed cities like Lahore, Islamabad, Quetta, Peshawar and Karachi only form 29% of our following – this puts 71% of people following our page in lesser developed cities and rural areas. With more than a million people reached, we feel confident that we are reaching our intended audience.

When asked about the feedback the campaign has received, Shafi stated:

The response has been far higher than what we had expected. Our posts are on average being actively engaged by almost 1,800 people each time we post. A lot of people, mostly women, have reached out to us with their legal queries and issues via private messaging. We have tried to accommodate them as far as possible right now but due to this response, we have sped up the launch of our upcoming projects which will be dedicated towards answering legal queries for free and connecting those who require legal help with relevant lawyers and organisations.

The campaign also received some criticism:

Some feedback we have received has been concerns on the lack of enforcement of the laws we post. While solving this completely will take time, we aim to launch other social media campaigns which will be aimed at enforcement of laws and providing justice to victims. We will raise awareness on instances of human rights abuses in Pakistan and bring them to the notice of the relevant authorities. We will also post a follow up when action is taken to ensure that society is aware of laws being actively enforced.

However, the project hopes to expand:

This campaign is a part of a much larger effort. We require a lot of effort and we invite volunteers as we know that actions like these can go a long way when done by many.

The article was first published in Global Voices.