Push for solar energy: Is India on the right path?

India and China, though aiming for the same goal, have very different approaches towards solar energy. 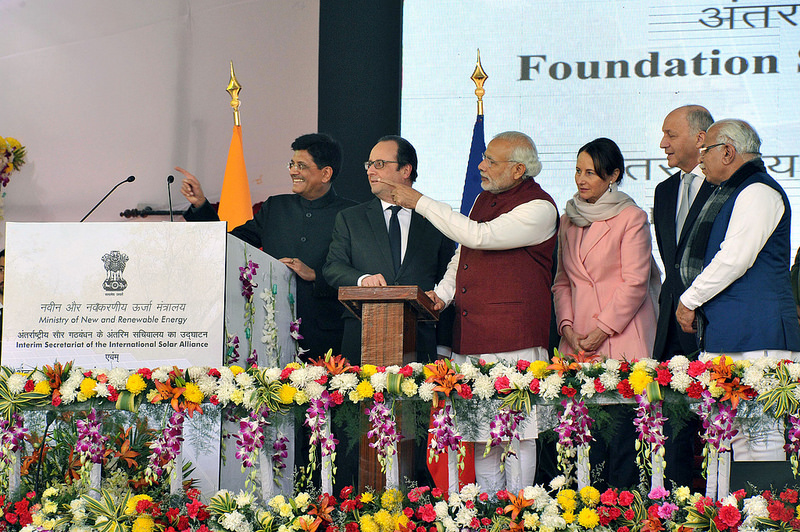 Dr Sanjib Pohit is a Senior Fellow at the National Council of Applied Economic Research.

Delhi recently hosted the International Solar Alliance (ISA) Summit from 10th to 12th March 2018. With 55 countries having signed the ISA framework agreement, and 26 of them already ratifying it, it looks like the ISA is certainly gaining momentum. Of course, India seems to be the right platform for such an event. After all, barring China, no other country is pushing as aggressively for solar energy as India is. The solar energy sector has accounted for the largest capacity addition to the Indian electricity grid in the last year and is expected to be the same this year.

A growth spurred by imports

While the shift towards solar energy is a wise move, as India is endowed with unlimited sunshine for most of the year, the path that India is following is not so glorious. It seems that India is making the same mistake as it did with the mobile revolution. India’s mobile revolution was entirely fuelled by imports, whether one looked at the mobile architecture, associated software or the handsets. China too embarked on a full-scale mobile revolution, even when they could produce the entire architecture in-house. The same is true in case of China’s shift towards solar energy. By contrast, India seems to be too eager to embark on a full-fledged solar energy revolution, by riding on the growth of LED imports.

As a result, imports of solar cells, primarily from China, Malaysia, Singapore and Taiwan, increased from 1275 MW in 2014-15 to 9331 MW in the last fiscal. On the other hand, domestic production stood at 246 MW in FY15 and is likely to increase to 1164 MW in the current financial year. Consequently, the market share of domestic players has steadily diminished from 13 percent in FY15 to an estimated 7 percent in FY17. Due to this fall, domestic players have asked for safeguard duty on solar cells, whether or not assembled into modules or panels, immediately for four years. However, in the present World Trade Organisation (WTO) regime, there is a limit on the use of safeguard duty or anti-dumping duty.

To some extent, India’s solar industry is weak in terms of its backward linkage (that is, which provides goods and services for its production activities). The basic primary input for solar cells is pure silicon, a product India is yet to optimise its production in. By contrast, among the high technology export items, silicon invariably figures as a bulk item of ‘high technology chemical export’ in developed countries like the USA, Germany and Japan. China has entered this export market recently, in line with its push towards solar energy. Without support from the government, it is unlikely that the domestic industry can make a breakthrough in this high technology niche segment.

Solar Photovoltaics (PV) technology requires higher scientific and manufacturing sophistication. Crystalline polysilicon cells arranged into modules or panels are the most established technology by far but recently, advances in conversion-efficiency and decline in production costs have been obtained in producing thin-film (TF) solar cells. Cellular solar cells have higher conversion efficiency but TF solar cells are cheaper to manufacture. A third, experimental technology uses organic photovoltaic cells. While China has nearly mastered these technologies, India lags behind in this aspect.

Many of the so-called technologically developed countries, including China, have used public procurement policies judiciously without violating the WTO rule for promoting technological advancement in the domestic industry. By contrast, current procurement practices promote competition between vendors and not between technologies or technical standards. Designed to minimise short-term financial losses, it does not statutorily bind procurement with the technological processes and industrial development. Hence, it is not likely to promote technological advancement. Rectifying this lapse in subsequent amendments will depend on political will and bureaucratic vision.

Thus, if India does not intend to repeat the mistakes of its mobile revolution, Indian policy-makers need some serious introspection for promoting the growth of the domestic solar industry.