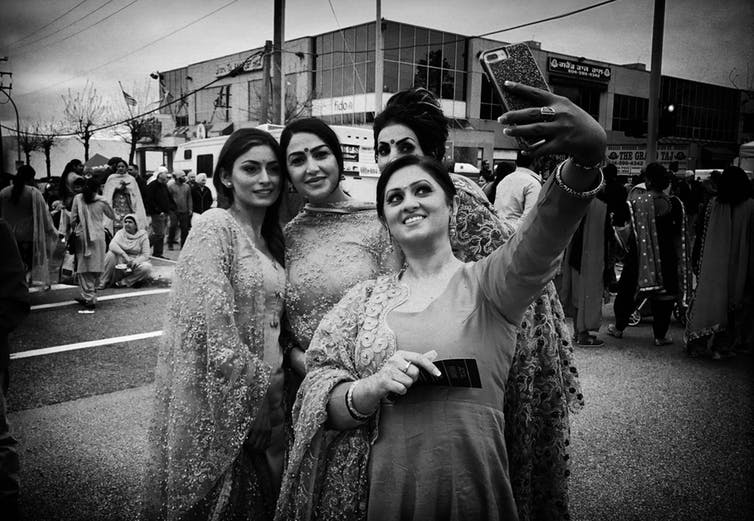 A woman takes a selfie with three others while attending the Vaisakhi Parade in Surrey, B.C., on April 22, 2017. THE CANADIAN PRESS/Darryl Dyck

Studies suggest a significant proportion of Indian-origin families in Canada are practising female feticide, sex-selective abortion. A disproportionately higher number of male children were born to mothers of Indian origin in Canada, according to research published in the Canadian Medical Association Journal. This imbalance was starker for couples who already had two daughters.

The findings stirred much debate and discussion in the Canadian media.

Since Punjabis constitute a significant portion of Indian immigrants as well as foreign students in Canada, it is crucial to understand the manifestation of gender inequality that may cause this sex selection and prejudice against girl-children within the traditional patriarchal Punjabi culture.

Researchers in economics and sociology have traced the origins of persistent gender inequalities to the development of plow agriculture, which devalued women’s labour, rendered their status inferior to that of men and led to a strong preference for sons.

In Punjab, an agrarian, male-dominated society, women are expected to preserve their family’s izzat, or honour. This means refraining from doing anything that can disgrace the men of their family.

In this context, where a woman’s identity is defined by her male counterparts, being unmarried invites social sanctions for women as well as for their families.

Almost every aspect of Punjabi culture is rife with the notion of women being the bearers of the izzat of their fathers, brothers and all other male relatives. Even the songs, called suhag, sung on the eve of a girl’s wedding day emphasize why getting married is important. Being unmarried brings her father extreme shame.

Consider, for example, the lyrics of a popular suhag “Kotha kyon niveya’n” (“Why is the house collapsing”):

Why has the father bowed down (shamefaced)?

Why is the righteous father feeling humiliated?

The daughter of this father is still unmarried,

That’s why he is feeling humiliated.

In a patriarchal culture dominated by notions of hypermasculinity, where bowing down is mortifying for a man, a daughter’s singlehood can bring a father to his knees.

Women’s bodies and sexualities are controlled and regulated by men through the cultural constructs of honour and shame. An unmarried daughter always remains a “threat” to the men’s izzat and any expression of her sexuality has the potential to destroy the family honour. It is not uncommon for men to use violence to reinstate that honour.

An extreme manifestation of that violence is “honour killing,” instances of which aren’t unheard of in Canada.

It is considered tragic if the daughter remains single for an extended period of time as the parental home is not considered apna ghar (own home) for the daughter. She is somebody’s amaanat (precious possession), and the parents are simply temporary caretakers.

To further unpack the devaluation of women in Punjabi society and by Punjabi-Canadian society, we use a collaborative autoethnography technique. To do this, we discuss our lived experiences of being single, Punjabi and upper-caste women. We were both born and brought up in Punjab and we came to Canada to pursue higher education.

My sister was 23 years old, and a newly minted dentist in Amritsar, a prominent city in Punjab, when my parents started looking for a “suitable match” for her. Suitability is defined in terms of social status, age and education. Social status, in turn, is constituted by caste, wealth and land ownership.

All of 17 years of age at the time, I can recall a distinct sense of foreboding as I watched my parents trying to arrange a marriage for my sister. They used several words to describe their feelings about her marriage: duty, responsibility, burden.

My sister and I were quite used to the idea of being perceived as a burden. We had grown up hearing from family friends and members of the extended family that it was unfortunate for our father to have two daughters. We heard things like: “Your poor father — he has to marry off two girls.”

In addition to the strong preference for sons, note that all the sympathy was reserved for my father and not for both my parents.

With the passage of time, my parents became increasingly desperate to marry off my sister as she was becoming, ostensibly, less desirable with age. They cajoled, begged, and even threatened my sister to agree to wed any man whose family showed even the slightest interest in her regardless of her own feelings about the men in question.

The general state of anxiety in our household did not end until a suitable match was arranged for my sister. She was 25 years old.

Clearly, an unmarried daughter is a looming threat for the family’s izzat.

Rural Punjab. It was 4:30 in the morning. There was an unease caused by some hushed whispers that I could sense in my partially sleepy state. I went back to sleep to wake up a few hours later for school (I was a 24-year old grad student), unaware that the worst trauma of my life was going to present itself in a matter of minutes.

One of my male cousins snatched my laptop bag from me and I was told to keep quiet. I looked at them in bewilderment as they proceeded to confiscate my phone and took the battery out. I, somehow, gathered up my courage to ask what was happening once the Earth stopped slipping from under my feet. “We are not letting you go to the university anymore.”

“Just be thankful that we didn’t kill him,” was one of the sentences being uttered by someone in the bunch of male relatives of my joint family surrounding me. It was only after a couple of hours that I realized that this bunch had gone out that fateful foggy morning of November and had beaten the daylights out of my alleged “boyfriend.”

I realized that I was constantly under surveillance — if not by my family, then by “sympathizers” of my family concerned about my family’s honour.

The intensity and urgency of my reprimand might have been caused and compounded by the fact that just a few months earlier, one of my cousins had the courage to go against family wishes and marry a lower-caste man. She was then excommunicated and remains that way to this day.

We hope this piece helps Canadian readers understand the ways in which the cultural construct of izzat, combined with ideas of hypermasculinity, leads to the devaluation of women, as well as a strong preference for sons, among Punjabi immigrant families.

Given that many women in Canadian society have significant autonomy over their lives, Punjabi immigrant families likely impose harsh sanctions on young women upon their arrival in Canada to protect them against such freedoms.

We can begin to address these issues by bringing them them out in the public. Special efforts should be made to include Punjabi men in this discourse.

We need Canadian academics to research the idea of izzat, as well as ideas of hypermasculinity and agrarian patriarchy as practised by the Punjabi community in Canada.