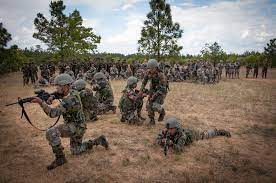 According to media reports, protesters blocked roads and damaged public properties in many states, including Bihar, Madhya Pradesh, Haryana and Uttarakhand.

The aspirants were apparently are unhappy with the length of service, no pension provisions for those released early, and the age restriction, that now makes many of them ineligible.

The protests turned violent as trains were set afire, window panes of buses smashed and passersby, including a ruling BJP MLA, pelted with stones on the second day of protests in Bihar.

Not only did the protesters block railway tracks, but they also threw burning tyres on roads and performed push-ups and other exercise drills on the streets as a mark of protest.

The ‘Agnipath’ recruitment scheme proposes a four-year employment period in the Armed Forces, followed by compulsory retirement, for at least 75 per cent of the personnel, without any pension benefits.