‘Energy For All’ Says PM Modi At G7 Summit, Heads For Quick UAE Trip After… 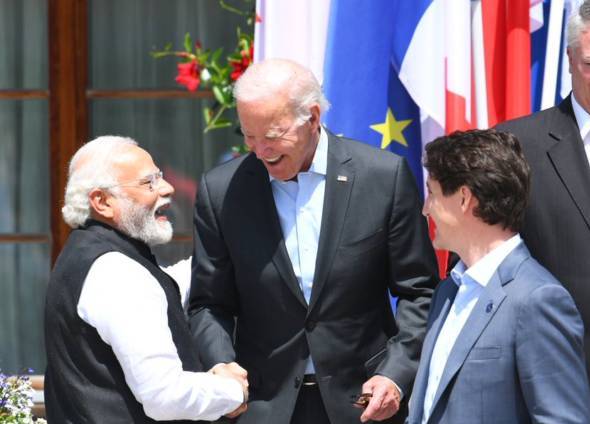 The rich and the poor also should have equal right to energy, Prime Minister Narendra Modi said on Monday in his remarks at a special session of the G7 summit in Germany.

Mr. Modi said the clean energy sector has emerged as a major domain in India and the G-7 should collaborate with India in this field.

‘Today, a huge market for clean energy technologies is emerging in India. G-7 countries can invest in research, innovation, and manufacturing in this field. The scale that India can provide for every new technology can make that technology affordable for the whole world,’ Mr. Modi said.

The G7 summit was dominated by the Ukraine crisis, which PM Modi indirectly referenced.

‘All of you will also agree with this that energy access should not be the privilege of the rich only. A poor family also has the same rights on energy. And today, when energy costs are sky-high due to geopolitical tensions, it is more important to remember this thing,’ PM Modi said.

PM Modi made his remarks at a session of the summit on ‘Investing in a better future: Climate, Energy, Health.’

India, along with South Africa, Indonesia, Argentina and Senegal, are the guests at this year’s G7 summit.

Mr. Modi’s remarks showcased India’s efforts to blend in with the G7 amid talks of dependence on the Russian energy sector.

Western economies have been championing ‘clean energy’ as an alternative to volatile oil and gas.

‘Ancient India had seen a time of immense prosperity; then we have also tolerated the centuries of slavery, and now independent India is the fastest growing big economy in the whole world,’ said PM Modi referring to India’s fast post-pandemic growth.

India accounts for 17% of the global population but is responsible for 5% of global carbon emission, PM Modi said, which he attributed to the theory of co-existence with nature.

Mr. Modi was earlier welcomed around by German Chancellor Olaf Scholz at Schloss Elmauo and had a tea break with French President Emmanuel Macron, who is facing electoral challenges at home himself.

PM Modi headed for the UAE post the summit, where he will pay his condolences on the passing away of Sheikh Khalifa bin Zayed Al Nahyan, former UAE President & Abu Dhabi Ruler. President Sheikh Mohamed bin Zayed Al Nahyan received the Indian PM at the airport, in a special gesture.