Patels, Farmers, Businessmen: Who voted how in the Gujarat elections?

As the BJP won Gujarat again, it’s useful to look deeper into the voter numbers to determine where BJP and Congress gained and lost.

On Monday the Bharatiya Janata Party won the Gujarat state assembly elections for the sixth time in a row. A higher percentage of voters voted for the BJP this year than they did in the previous state election in 2012, but the number was lower than in the parliamentary elections of 2014. The Indian National Congress party scored a higher number of voters than in 2012 and 2014. Some might say it’s a bit like India’s gross domestic product data. When things are low (read Congress support), the only way is up and when things are so high (read BJP support), the only way they can go is down.

This analysis is not based on a survey of voters but based on actual Census data collated and compiled for each constituency.

First, a look at broad vote shares of both parties in Gujarat since the 2009 Lok Sabha election. This helps draw a trend of how vote shares have moved.

This, in essence, is the saga of the BJP victory yesterday.

Its 2014 vote share was so massive that it would have taken an enormous swing for it to lose Gujarat, regardless of whether it was a state or Lok Sabha election. 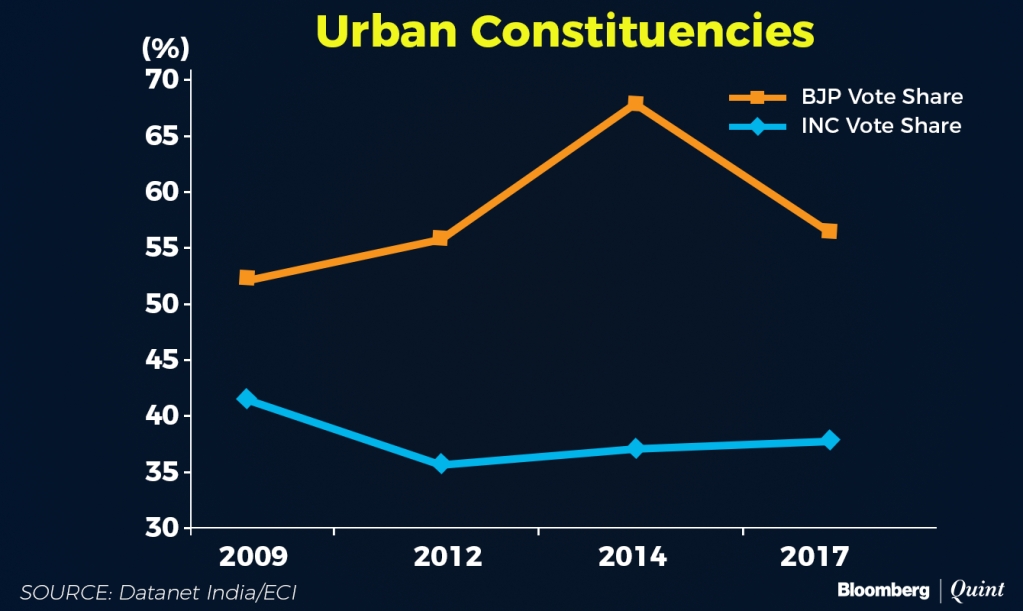 A similar trend can be observed in high-income and low-income constituencies.

The surprising trend is in constituencies with a high percentage of youth voters. Traditionally, it is thought that the BJP does better with youth voters.

While the BJP continues to do better in constituencies with higher youth voters, the gap has narrowed considerably.

Where did the BJP and Congress lose and gain seats vis-à-vis the 2012 election?

It gained 18 new constituencies from the Congress’s tally in 2012, largely rural ones.

There was significant ground reporting during the elections that suggested severe voter angst, especially in the urban constituencies.

What explains this dissonance between ground reporting and actual results? It is the margin of victory for the BJP in the 2014 elections in these urban constituencies.

The BJP won urban constituencies by such a massive margin that even a seemingly big swing against the BJP was not enough to convert into seats for the Congress.

The interesting trend is that compared to 2012, both the BJP and Congress have gained vote share across all segments – urban, rural, rich, poor, youth and Muslim constituencies.

The 2017 Gujarat election has been one where, paradoxically, both the BJP and Congress have claimed victory – one electoral, the other political. The Congress claims that this is the lowest tally of seats for the BJP in 20 years and its highest in 25 years. The BJP claims that it has won Gujarat for an incredible sixth consecutive time and remains undefeated for two decades. Both are absolutely right. The real question though is what does this Gujarat state election portend for the 2019 Lok Sabha elections?