Former CEA Arvind Subramanian says India’s GDP is being over estimated by 2.5 percentage points, and that the real growth rate is likely around 4.5% 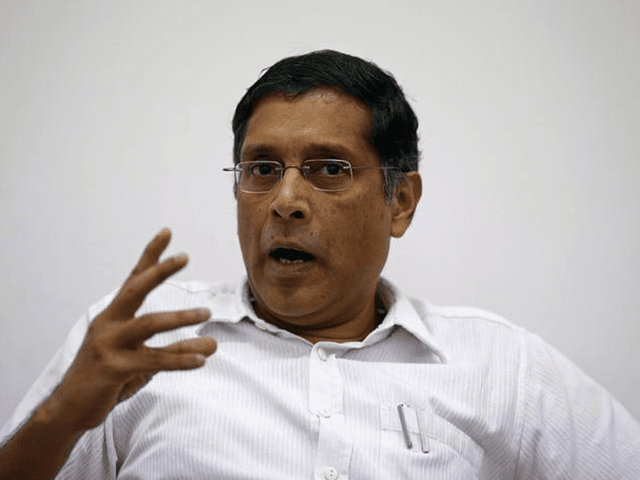 Former Chief Economic Adviser (CEA) Arvind Subramanian published research that says India has been overestimating its GDP. He says the recent changes made by the government in the methodology for GDP calculation have led to an overestimation of the GDP by 2.5 percentage points. The government has now released its own statement defending its methodology.

“My results indicate that the methodological changes led to GDP growth being overstated by about 2.5 percentage points per year between 2011-2012 and 2016-17, a period that spans both UPA and NDA governments,” said Subramanian.

At the very outset, Subramanian clarifies that while these changes to the methodology were implemented when the NDA government came to power in 2014, they originate from experts employed under the UPA government.

“The non-politicised nature of these changes can be seen from the fact that the new estimates bumped up growth for 2013-14, the last year of the UPA-2 government,” said Subramanian.

He used 17 indicators studied from 2001 to 2018 that are reported independent of the Central Statistics Office (CSO), such as automobile sales, industrial production, exports, imports, and others.

“Reproducing the detailed methodology underlying the GDP estimates is impossible for outside researchers, so it is difficult to trace the source of the problem. But we can locate one sector where the mis-measurement seems particularly severe, namely formal manufacturing,” said Subramanian.

Who is Arvind Subramanian?

Arvind Subramanian is an Indian economist and served as the Chief Economic Adviser to the Indian government between 2014 and 2018. He took over after Raghuram Rajan joined the RBI as governor.

He attended St. Stephens College in Delhi and completed his MBA from IIM-Ahmedabad. He also went to Oxford University in the UK for his PhD. His work has been cited in the Washington Post, New York Times, Wall Street Journal and others.

He is also a contributor to the Financial Times and Business Standard.

During his tenure as CEA, Subramanian supervised the Economic Survey of India, a publication on economic policy and development. He also contributed to policy decisions, such as the new GST policy.

Subramanian is also a senior fellow at the Peterson Institute for International Economics, and a visiting lecturer of public policy at Harvard University’s Kennedy School of Government.

Recently, while working on a report on the service sector, the National Sample Survey Office (NSSO) discovered that a faulty database was being used to calculate India’s GDP.

The Ministry of Corporate Affairs (MCA)-21 database is a list of companies whose revenue is included in the Indian GDP. However, the NSSO found that 38% of those companies were untraceable or defunct.

The MCA says that the database considers a company active if it has filed tax returns at least once in the last three years. However, 15% of these companies had untraceable addresses and 21% were inactive entirely.

According to the Economic Times, two other reports compiled by the NSSO on this database had to be scrapped because the findings painted a grim picture of India’s economic growth.

The primary concern with the MCA-21 database was that India’s GDP is being inflated.

Experts like Professor R. Nagaraj from Indira Gandhi Institute of Development Research said he and his colleagues urged the government to verify the database, but they were ignored.

“Some of us had repeatedly asked CSO officials to verify the MCA-21 numbers before using them in national accounts, but they finalised the new series without adequate scrutiny and debate,” said Nagaraj.

Subramanian says India’s GDP growth estimate matters not only for its international reputation but also for internal policy decisions. If the government does not have an accurate picture of the state of affairs, it cannot set appropriate policies, like repo rates.

The NSSO had found more troubling data related to unemployment. The report said that after demonetisation, India’s unemployment rate was the highest it’s ever been in 45 years—6.1%. But it was “buried” by the government.

Hence, employment became a big-ticket election issue, with the Opposition criticising the NDA on its poor handling of jobs and economy despite making them the pillar of its 2014 campaign.

Only a day after PM Modi was sworn in, the NSSO officially released data on unemployment that confirmed the 6.1% rate.

In a statement released on Tuesday, June 11, the Ministry of Statistics and Programme Implementation (MoSPI) responded directly to Subramanian’s comments, saying its methodology of GDP calculation adheres to UN-set standards.

“The GDP estimates released by the Ministry are based on accepted procedures, methodologies, and available data, and objectively measure the contribution of various sectors in the economy,” said the MoSPI.

The ministry goes on to elaborate that India uses the guidelines under the Special Data Dissemination Standard of the International Monetary Fund. It also says GDP estimates are based on the methodology decided by experts at the National Statistical Commission, Indian Statistical Institute, RBI, Ministries of Finance, Corporate Affairs, and Agriculture, NITI Aayog, and selected state governments.

“It may be noted that decisions taken by these committees are unanimous and collective after taking into consideration the data availability and methodological aspects before recommending the most appropriate approach,” said the MoSPI.

Subramanian has not yet countered this statement. However, the rhetoric around employment and growth seems to have made enough of an impact for Modi to reconstitute cabinet committees.

At a cabinet meeting, Modi created two cabinet committees solely dedicated to growth and employment; he will chair these himself. The committee on growth and investment is planning to add Rs 100 lakh crore over the next five years.