New kilo on the block: Here’s how things will change

May 20, 2019, marks one of the biggest shake-ups in the history of measurement. Qrius explains the new standards on how we define units of mass, length, time, and explores why they were needed. 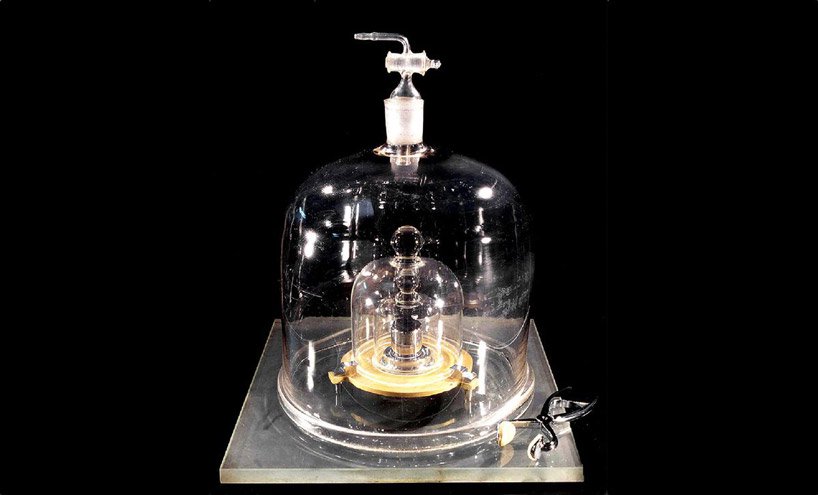 The IPK, the official physical standard for the kilogramme since 1889. Credit: BIPM

On International Metrology Day (May 20) this year, India along with the rest of the world adopted new standards to measure mass, length, time, current, and temperature, which until this point, used to follow the International System of Units (SI).

Four of the seven base measuring units including kilogram, ampere, mole, and Kelvin ceased to be what they were, following the global resolution last year to redefine them. The other base units are—second, metre, and candela.

This is being done by updating the global reference for modern mass, from a block of metal which has determined the mass of all kilograms since 1889, to the Planck constant. This update is expected to have far-reaching effects, including changes in textbooks.

The kilogram, the standard international (SI) unit of mass, is the last of the seven base units to be still linked to a physical artefact.

Also known as the Big K, the International Prototype Kilogram (IPK) is a small cylinder of platinum-iridium alloy kept in an underground airtight vault in Paris and has been the yardstick for over a century, until it was recently deemed unreliable and inaccurate.

Why is it being replaced?

The IPK is about 39 mm (or an inch and a half) in both height and diameter. It has lost atoms and mass due to microscopic contaminants over time and due to periodic cleaning.

This means that the official value of a kilogram has been necessarily and constantly recalibrated to match the new mass multiple times, even if the weight lost every year was equivalent to that of an eyelash. This doesn’t seem to suggest dire consequences when you are buying flour or weighing your baggage at the airport, but the repercussions of this inaccurate and variable definition could be disastrous in chemistry laboratories, or when it comes to medicine dosage.

To complicate this further, around 40 alleged exact copies of the IPK were distributed across the world to calibrate all existing scales, weights, and balances at laboratories, supermarkets, bakeries, and pharmacies. With their mass undergoing changes at different and indeterminable rates, the unit’s definitions are currently spinning out of sync.

A move towards standardisation and hyper-accuracy

After much discussion, representatives of 60 countries at the General Conference on Weights and Measures (CGPM) of the International Bureau of Weights and Measures (BIPM), which regulates the metric system, voted on November 16, 2018, to remove the IPK and replace it with the Planck constant.

This means that the physical object has been retired in favour of an infinitely more precise measurement taken from a quantum ratio.

Based on a fundamental law of nature—something that doesn’t change—the Planck constant aims to solve problems caused by the lack of a dependable universal standard. It bases itself on the fact that the behaviour of particles and waves depends on the metre, the second (both determined by the speed of light), and the kilogram.

From now onwards, the fixed Planck constant, using the Kibble balance, will start defining a kilogram by equating mechanical energy exerted by the mass of an object with an equivalent amount of electrical energy.

In the present system, you have to relate small masses to large masses by subdivision. That’s very difficult—”and the uncertainties build up very, very quickly”, said Ian Robinson, a specialist in the engineering, materials, and electrical science department at Britain’s National Physical Laboratory.

One of the things this (new) technique allows us to do is to actually measure mass directly at whatever scale we like, and that’s a big step forward.

He said it had taken years of work to fine-tune the new definition to ensure the switchover will be smooth.

The Planck constant’s precise value after years of experimentation gives the unit an unchanging quality, and eliminates the inaccuracies involved in measuring mass against a mutable block of metal. The instrument, invented by British physicist Bryan Kibble in 1975, will help ascribe a more stable value to the SI unit.

Three other base SI units, apart from the kilogram—the ampere, the Kelvin, and the mole—have also undergone changes. The ampere, for instance, will be redefined by the charge carried by a single proton, while the value of Kelvin will be now be based on the Boltzmann constant.

Dr JT Janssen, director of research at the National Physical Laboratory (UK) told New Atlas last year, “Once implemented, all the SI units will be based on fundamental constants of nature whose value will be fixed forever. This will pave the way for far more accurate measurements and lays a more stable foundation for science.” The redefinition of the kilogram will be of immense use, particularly in technology, science, health and industrial sectors.

“The fundamental constants are invariants of time and space and have successfully replaced the artefact based units, and aptly opened up the new era for quantum world by linking all seven base units to fundamental constants or quantum standards,” says K Aswal, Director of the National Physical Laboratory (NPL), one of the oldest scientific institutes in the country that also takes care of setting meteorology standards domestically.

“Since the 1960s, we have to rely ever more heavily on advanced science and engineering in our day-to-day lives, and also in manufacturing, healthcare and science. The proposed changes in the unit definition have been designed to have no immediate consequences,” he said.

“The unit redefinitions represent a profound change of perspective and they are expected to form the foundations of improved measurements for decades to come as science and technology continues to develop in a way we cannot currently foresee,” Aswal said, however, this “may not change anything drastically”, but it will matter when it comes to measurements less than a kilogramme. For instance, measuring smaller diamonds.

The NPL has also sent recommendations on the proposed changes to be incorporated in the National Council of Educational Research and Training (NCERT) to implement them in contemporary education. Recommendations on the proposed changes have also been sent to the All India Council for Technical Education (AICTE), Indian Institutes of Technology (IITs), National Institutes of Technology (NITs), and other academic institutes to be incorporated in syllabi of metrology courses in graduate engineering and academic courses.